A five-point performance by the Islanders Mathew Barzal, three more Canucks games are postponed by COVID-19 protocols, division stars and rookie of the month for March are announced, Nathan MacKinnon fined, and more in today’s NHL morning coffee headlines

NHL.COM: Mathew Barzal’s hat trick carried the New York Islanders to an 8-4 romp over the Washington Capitals. Barzal finished with five points while teammate Jordan Eberle scored twice. John Carlson tallied twice for the Capitals, who lost goaltender Ilya Samsonov early in the first period following an accidental collision with teammate T.J. Oshie. The Islanders are tied with the Capitals and Pittsburgh Penguins with 50 points but the Capitals remain in first place in the MassMutual East Division on the basis of a game in hand. 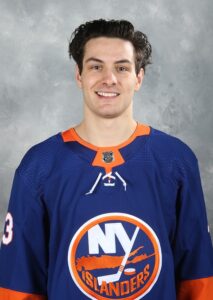 The Penguins, meanwhile, rode a 30-save performance by goaltender Casey DeSmith to a 4-1 victory over the Boston Bruins. Pittsburgh forward Branden Tanev returned to the lineup after missing six games and picked up an assist. The Penguins have won five straight but sit in third place behind the Islanders as the latter has two more regulation wins. Boston defenseman Brandon Carlo left the game with an upper-body injury. The Bruins sit fourth in the vision with 41 points, three ahead of the Philadelphia Flyers and New York Rangers.

Speaking of the Rangers, they edged the Buffalo Sabres 3-2 on an overtime goal by Mika Zibanejad. Artemi Panarin collected two assists for the Blueshirts while Sabres goalie Dustin Tokarski kicked out 44 shots. The Rangers are tied with the Flyers with 38 points but the latter holds fifth place with a game in hand.

SPECTOR’S NOTE: The East division is getting quite interesting. The Penguins have surged to jockey with the Capitals and Islanders for first place, the Bruins are clinging to fourth place but are being threatened by the Rangers, who could soon surpass the struggling Flyers.

Third-period goals by Ross Colton and Brayden Point 66 seconds apart lifted the Tampa Bay Lightning past the Columbus Blue Jackets 3-2 to snap a three-game losing streak. Point had two goals on the night while Andrei Vasilevskiy turned aside 36 shots. Zach Werenski had a goal and an assist for the Jackets. With 52 points, the Lightning holds onto first place in the Discover Central Division. The Jackets (36 points) remain in sixth place in the division, three points back of the Nashville Predators and Chicago Blackhawks.

An overtime goal by Alex Wennberg gave the Florida Panthers a 3-2 win over the Detroit Red Wings. Frank Vatrano scored the tying goal and collected an assist on Wennberg’s winner. The Panthers also have 52 points but remain in second place in the Central as the Lightning hold a game in hand.

The Carolina Hurricanes got a late goal by Jesper Fast to nip Chicago 4-3 and sit one point behind the Lightning and Panthers. Warren Foegele tallied twice for the Hurricanes. The Blackhawks remain tied with Nashville with 39 points but the latter holds fourth place in the Central on the basis of regulation wins.

As for the Predators, they missed an opportunity to open a lead over the Blackhawks as their six-game win streak ended in a 4-1 loss to the Dallas Stars. Joe Pavelski collected two assists for the Stars (34 points), who sit five behind the Predators and Blackhawks.

A shootout goal by Kevin Fiala lifted the Minnesota Wild past the Vegas Golden Knights by a score of 3-2. Cam Talbot had a 35-save performance while Kirill Kapizov had a goal and an assist for the Wild (46 points), who moved within four points of second-place Vegas in the Honda West Division. The Golden Knights and Colorado Avalanche each have 50 points but the latter holds first place because of regulation wins.

The Montreal Canadiens defeated the Ottawa Senators 4-1 as Brendan Gallagher and Phillip Danault each had a goal and an assist. Jake Allen made 23 saves for the Habs, who hold a six-point lead for fourth place over the Calgary Flames and Vancouver Canucks with 41 points.

Florida Panthers captain Aleksander Barkov is the star of the month for March in the Discover Central Division. Colorado Avalanche goaltender Philipp Grubauer is the Honda West star of the month. Pittsburgh Penguins captain Sidney Crosby took home the honor for the MassMutual East Division while Edmonton Oilers captain Connor McDavid is the Scotia North Division star for March.

Carolina Hurricanes goaltender Alex Nedeljkovic was named the NHL’s rookie of the month for March 2021.

The Vancouver Canucks have had three additional games postponed as forwards Adam Gaudette and Travis Hamonic and a member of the coaching staff were placed on the NHL’s COVID-19 protocol list earlier this week.

SPECTOR’S NOTE: Gaudette and his wife faced some flak on social media by several folks alleging they failed to properly protect themselves from COVID-19. In fact, the couple followed all guidelines and were informed they did nothing wrong by the team and health officials. The Gaudettes have no idea how they caught the coronavirus and don’t deserve being hounded by some ill-informed fans.

NEW YORK POST: Brendan Lemieux requested a trade from the Rangers prior to their dealing him last week to the Los Angeles Kings for a fourth-round pick. Lemieux made the request as he wanted to play for a team where he’d have a more meaningful role. He’d been seeing fourth-line duty this season with the Rangers.

← Demko Sets NHL Goalie Market with Five-Year Extension With Canucks NHL Rumor Mill - April 2, 2021 →
We use cookies on our website to give you the most relevant experience by remembering your preferences and repeat visits. By clicking “Accept”, you consent to the use of ALL the cookies.
Do not sell my personal information.
Cookie SettingsAccept
Manage consent