​What could be in store this summer for the Oilers? Will the Blackhawks re-sign or trade Nikita Zadorov in the offseason? Check out the latest in today’s NHL rumor mill.

EDMONTON JOURNAL: Salary-cap limitations prevented Oilers GM Ken Holland from making big moves at the recent trade deadline. Terry Jones expects Holland could be able to do more in the offseason and next season once he’s out of salary-cap hell. 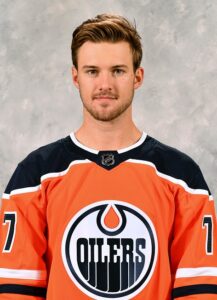 Holland told Jones he doesn’t know if top-pairing defenseman Oscar Klefbom has made a decision about continuing his career following shoulder surgery. He intends to speak with the blueliner in June and July as they get closer to the expansion draft and free agency.

SPECTOR’S NOTE: Klefbom has two more seasons left on his contract worth an annual average value of $4.167 million. Getting him back healthy for next season will certainly help his defense core.

If Klefbom’s career is over he’ll go on permanent long-term injury reserve if necessary, giving the Oilers GM some cap relief to perhaps put toward re-signing an unrestricted free agent such as Ryan Nugent-Hopkins, Adam Larsson or Tyson Barrie, or perhaps to find one of their replacements.

CHICAGO SUN-TIMES: Following last Monday’s NHL trade deadline, Ben Pope suggested Nikita Zadorov has the remainder of this season to prove to the Chicago Blackhawks he still belongs in their future. Pope wrote the Blackhawks set a high asking price for the big 26-year-old blueliner before the trade deadline but decided to keep him when no one met that price.

Zadorov becomes a restricted free agent with arbitration rights this summer. It’ll cost $3.2 million to qualify his rights but it’s expected he’ll seek more than that on his next contract. Pope speculated Blackhawks general manager Stan Bowman could trade Zadorov this summer if he fails to solidify his role as their shutdown defenseman.

Mental mistakes and turnovers have proven costly for Zadorov. He faces a competitor for his job in Riley Stillman, who was recently acquired from the Florida Panthers.

SPECTOR’S NOTE: The Blackhawks shipped winger Brandon Saad to the Colorado Avalanche for Zadorov and Anton Lindholm, the latter spending this season on their taxi squad. The big blueliner could be shopped in the offseason or perhaps left exposed in the expansion draft if he fails to make a positive impression over the remainder of this season.

Bowman will probably prefer to trade Zadorov rather than lose him for nothing to the Seattle Kraken. The decline in his stock, however, means he might only fetch a mid-range draft pick or a prospect.

← NHL Morning Coffee Headlines - April 19, 2021 What Next For The Ottawa Senators? →
We use cookies on our website to give you the most relevant experience by remembering your preferences and repeat visits. By clicking “Accept”, you consent to the use of ALL the cookies.
Do not sell my personal information.
Cookie SettingsAccept
Manage consent