​The Canucks win their first game in their return from COVID-19 pause, and more in today’s NHL morning coffee headlines.

NHL.COM: Bo Horvat scored two goals, including the winner in overtime, as the Vancouver Canucks edged the Toronto Maple Leafs 3-2. It was the Canucks first game since March 24 as an outbreak of COVID-19 paused their schedule on March 30. Braden Holtby made 37 saves for the win. Canucks defenseman Alex Edler received a five-minute major penalty and game misconduct for a knee-on-knee hit on Leafs winger Zach Hyman in the second period. Hyman left the game and there was no immediate update on his condition following the game. 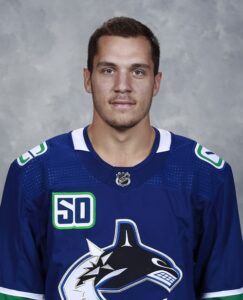 SPECTOR’S NOTE: Hyman’s injured knee is the same one he had surgically repaired in 2019. It remains to seen if Edler will receive supplemental discipline. That aside, it was a big win for the Canucks coming off a traumatic three weeks that threatened to derail the remainder of their schedule. The Leafs, meanwhile, remain in first place in the Scotia North Division with 61 points.

Boston Bruins winger Brad Marchand reached his 700th career point with a four-point performance in a 6-3 win over the Washington Capitals. Marchand, Patrice Bergeron and David Krejci each scored twice and David Pastrnak collected three assists. T.J. Oshie scored two goals for the Capitals, who lost Justin Schultz to a lower-body injury. They also played without Zdeno Chara, who is listed as day-to-day with an undisclosed ailment. The Capitals sit atop the MassMutual East Division with 62 points while the fourth-place Bruins (56 points) have won four straight and sit three points behind the third-place Pittsburgh Penguins.

The New York Islanders got a 30-save shutout from Ilya Sorokin to nip the Philadelphia Flyers 1-0 on Nick Leddy’s overtime goal. The Isles (60 points) are two points behind the Capitals and one up on the Penguins.

Speaking of the Penguins, they dropped a 4-2 decision to the Buffalo Sabres. Sam Reinhart scored twice and Dustin Tokarski made 34 saves as the Sabres have a record of 3-1-1 in their last five contests.

The New York Rangers blew a 3-0 lead but rallied to down the New Jersey Devils 5-3. Goals by Mika Zibanejad and Ryan Strome late in the third period gave the Blueshirts the victory. With 52 points, they’re four points behind the Bruins.

Vegas Golden Knights captain Mark Stone extended his multi-point game streak to four games as his club down the Anaheim Ducks 5-2. Stone had a goal and an assist. Teammate Reilly Smith left the game in the third period with an undisclosed injury and is listed as day-to-day. Vegas moved into a tie with the Colorado Avalanche with 64 points but the Avs sit in first place in the Honda West Division with a game in hand.

YARDBARKER: A report in Sports Business Journal claims NHL jersey advertising could begin as early as 2022-23, though nothing has been approved or finalized yet by the league board of governors. The location of a jersey patch is being discussed and evaluated. It could be placed on the shoulder or chest. The size of the patch remains unclear.

SPECTOR’S NOTE: As long as that patch doesn’t detract from the team logo I don’t think it’s going to be an issue. The league must find as many new streams of hockey-related revenue as possible given the effect of COVID-19 upon its coffers.

SPORTSNET: Seventeen NHL teams are currently using long-term injury reserve for cap relief. The league is going to closely monitor those clubs over the remainder of the season to ensure there’s no cap circumvention.

← Sunday NHL Rumor Roundup - April 18, 2021 NHL Rumor Mill - April 19, 2021 →
We use cookies on our website to give you the most relevant experience by remembering your preferences and repeat visits. By clicking “Accept”, you consent to the use of ALL the cookies.
Do not sell my personal information.
Cookie SettingsAccept
Manage consent