Musing over Nick Foligno’s next destination plus a look at some possible offseason moves by the Sharks in today’s NHL rumor mill.

THE ATHLETIC: Aaron Portzline expects Nick Foligno is only a rental player this season for the Toronto Maple Leafs, pointing out their limited salary-cap space for next season. He said there was talk before the trade deadline of Foligno becoming the latest player to get moved at the deadline only to turn around in the offseason and sign with the club that traded him. 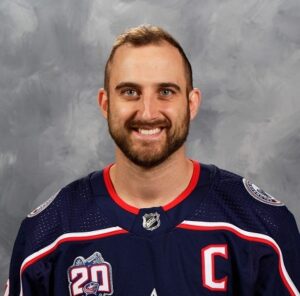 Could Nick Foligno return to the Columbus Blue Jackets this summer? (NHL Images)

The Minnesota Wild, however, could have an emotional pull for Foligno. His brother Marcus plays for the Wild, who were said to have an interest in Nick before the trade deadline. They could attempt to sign him this summer.

SPECTOR’S NOTE: Foligno could return to Columbus, joins his brother in Minnesota or perhaps sign with a Stanley Cup contender. The Wild could be in a better position to offer him a better contract plus they appear closer to becoming a contender than the Blue Jackets right now.

THE ATHLETIC: Kevin Kurz recently examined potential offseason moves by the San Jose Sharks. It’s possible most of their pending unrestricted free agents, including Patrick Marleau, won’t be back next season.

Marleau’s indicated he’d like to continue his NHL career but it might not make sense for the team or the 41-year-old forward, who still wants to chase the Stanley Cup. He could find it difficult signing with a contender. None were interested in his services at the trade deadline.

Most of the Sharks’ restricted free agents, including Ryan Donato, Noah Gregor, Rudolfs Balcers and Dylan Gambrell, could be re-signed.

Kurz believes it’s difficult to predict if the Sharks will protect all of their core high-salaried players in this summer’s expansion draft or if they’ll try to entice the Seattle Kraken to take one of them (Brent Burns? Evander Kane? Marc-Edouard Vlasic? Martin Jones?) off their current roster.

It’ll be difficult for the Sharks to add via free agency with $63.6 million already invested in just nine players for 2021-22. Kurz anticipates they could target an established goaltender who can play No. 1 minutes.

SPECTOR’S NOTE: This NHL season could be Marleau’s last. While he deserves praise for breaking the NHL games-played record, he’s well past his prime. The fact no clubs made inquiries about him at the trade deadline speaks volumes about his value in this summer’s free-agent market.

General manager Doug Wilson could find it difficult enticing the Kraken into selecting one of his overpriced stars. Of those mentioned by Kurz, Vlasic is the only one with a no-movement clause. Kane’s well-documented financial troubles dampen his value as an expansion draft target.

Burns might be appealing if the Kraken wants to inject a bit of star power into their lineup. That’s assuming they’re comfortable with carrying the 36-year-old defenseman’s $8 million cap hit for the next four seasons.

← NHL Morning Coffee Headlines - April 20, 2021 What Next For The New Jersey Devils? →
We use cookies on our website to give you the most relevant experience by remembering your preferences and repeat visits. By clicking “Accept”, you consent to the use of ALL the cookies.
Do not sell my personal information.
Cookie SettingsAccept
Manage consent