Predators prospect Luke Prokop comes out as gay, Carey Price calls for increased recognition of the history of residential schools, the Kraken could be close to signing Chris Driedger, and more in today’s NHL morning coffee headlines.

THE TENNESSEAN: Nashville Predators prospect Luke Prokop revealed yesterday he is gay, become the first player under an NHL contract to come out. “I am no longer scared to hide who I am,” wrote Prokop on Instagram. “Today I am proud to publicly tell everyone that I am gay.” 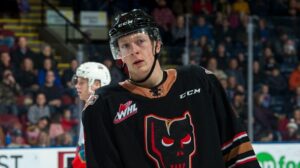 Prokop, 19, is a defenseman with the WHL’s Calgary Hitmen. The Predators selected him in the third round (73rd overall) in the 2020 NHL Draft and signed him last December to a three-year entry-level contract.

The news was no surprise for the Predators. Prokop informed general manager David Poile of his sexuality over a year ago.

SPECTOR’S NOTE: Prokop is receiving widespread support from the Predators and throughout the hockey community following his announcement yesterday. It took courage for this young man to come out. Hopefully, he’ll be an example and inspiration to other gay players.

SPORTSNET: Montreal Canadiens goaltender Carey Price believes more should be done to make Canadians aware of the history of residential schools. A growing number of unmarked graves continue to be discovered on the sites of some former residential schools throughout several provinces.

Price’s grandmother was a residential school survivor. His mother, Lynda Price, is chief of the Ulkatcho First Nation in Northern British Columbia.

“I think we need to do a better job in the future of recognizing that this is a part of our history in Canada and it’s just not right,” said Price.

SPORTSNET: Elliotte Friedman reported yesterday the Seattle Kraken are closing in on a three-year, $10.5 million contract with Chris Driedger. The 27-year-old Florida Panthers goaltender is due to become an unrestricted free agent on July 28.

Under expansion draft rules, the Kraken have a brief window (July 18 to 21) to negotiate exclusively with free agents left unprotected in Wednesday’s expansion draft. If signed by the Kraken, he’ll be considered that club’s selection from the Panthers.

SPECTOR’S NOTE: Driedger came into his own this season after several years of bouncing between the NHL and the minors. He outperformed Panthers starter Sergei Bobrovsky. With promising Spencer Knight now on their roster, they can’t afford to carry three goalies.

DAILY FACEOFF: Frank Seravalli reports the New York Rangers are close to signing a six-year contract extension with Barclay Goodrow. The Rangers acquired the 28-year-old forward last week from the Tampa Bay Lightning. It’s believed the annual average value of his new contract would be around $3.6 million.

SPECTOR’S NOTE: Not a bad pay raise for Goodrow, who’s completing a two-year, $1.85 million contract. That term is longer than most for a checking-line forward. They usually get deals between three-to-four years.

The schedule is expected to be released on July 22 but could contain a caveat indicating NHL participation in the Olympics isn’t yet guaranteed.

The NHL is still working with the International Olympic Committee on issues that prevented the league from participating in the 2018 Winter Games in Pyeongchang, South Korea.

NHL.COM: The Tampa Bay Lightning extended their affiliation with the ECHL’s Orlando Solar Bears for the next two seasons.

WINNIPEG SUN: The Jets hired Mark Morrisson as the new head coach of their AHL affiliate. He spent the past four seasons as an assistant with the Anaheim Ducks.

← NHL Rumor Mill - July 19, 2021 NHL Rumor Mill - July 20, 2021 →
We use cookies on our website to give you the most relevant experience by remembering your preferences and repeat visits. By clicking “Accept”, you consent to the use of ALL the cookies.
Do not sell my personal information.
Cookie SettingsAccept
Manage consent