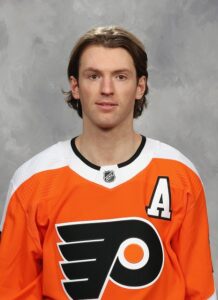 Winner of the Selke Trophy in 2019-20 as the NHL’s top defensive forward, Couturier is considered among the best two-way players in the league. He’s also the Flyers’ best player and one of their team leaders.

This deal could work out well for the Flyers as long as he maintains that Selke form. That shouldn’t be a concern through the first half of this new deal but could become burdensome if his performance declines over the second half.

SPECTOR’S NOTE: Svechnikov is getting a big pay raise coming off his entry-level contract. Unlike Couturier who is an established star at the peak of his playing career, the 21-year-old Hurricanes winger is a rising star who has displayed considerable potential as a first-line winger.

The Canes are banking on Svechnikov reaching or exceeding expectations. If he does, they’ll have a high-scoring top-line forward under contract during most of his best seasons at a price well below those of his peers.

SPORTSNET: Montreal Canadiens head coach Dominique Ducharme said Carey Price is expected to be ready for the start of training camp next month. The 34-year-old goaltender is currently recovering from offseason knee surgery.

Jonathan Drouin is also expected to be at camp. The 26-year-old winger took a leave of absence in April for personal reasons and missed the remainder of the regular season and the Canadiens march to the 2021 Stanley Cup Final.

SPECTOR’S NOTE: Despite last season’s surprising playoff success, the Canadiens could be in a tough fight to clinch a playoff berth in 2021-22 in the competitive Atlantic Division. A healthy Price and Drouin could be crucial to their postseason hopes this season.

BOSTON HOCKEY NOW: Joe Haggerty reports Bruins center Charlie Coyle is recovering well from offseason surgery to repair a fracture in his left kneecap and a small tear in his patellar tendon. He’s expected to be ready for the start of training camp in mid-September.

SPECTOR’S NOTE: Haggerty indicates those injuries accounted for Coyle’s struggles last season as he managed only 16 points in 51 games. He’s expected to take over the second-line center position left vacant by David Krejci’s decision to return to the Czech Republic.

OTTAWA SUN: The Senators are expected to name a team captain before the end of training camp. Thomas Chabot and Brady Tkachuk could be the leading candidates.

SPECTOR’S NOTE: The Senators haven’t had a captain since trading Erik Karlsson to the San Jose Sharks three years ago.