Could the Coyotes shop Phil Kessel, Christian Dvorak or Clayton Keller? Should the Oilers attempt to acquire Stars goaltender Anton Khudobin? Check out the latest in today’s NHL rumor mill.

NBC SPORTS: Adam Gretz believes it’s a given the rebuilding Arizona Coyotes will trade Phil Kessel at some point. The 33-year-old winger becomes an unrestricted free agent next summer and a re-signing appears unlikely.

AZ COYOTES INSIDER: Craig Morgan reports Kessel’s trade status seems to change daily. He felt the club might be content retaining the winger this season with an eye on shopping him near the trade deadline. However, multiple sources claim Kessel’s representatives have approached Coyotes general manager Bob Armstrong requesting a trade before this season begins. 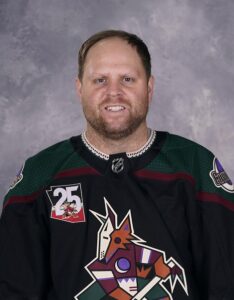 Honoring that request won’t be easy. Kessel would like to play for the Vegas Golden Knights but a source said they’re not interested in acquiring him. The Coyotes might have to remain patient as there isn’t much interest in the veteran winger around the league.

SPECTOR’S NOTE: Kessel also carries a $6.8 million cap hit and an eight-team trade list along with a no-movement clause that prevents him from being demoted to the minors. Unless the Coyotes are willing to pick up half of his cap hit his best chance of getting traded could be the February trade deadline.

Morgan also observed the considerable interest around the league in Christian Dvorak. The 25-year-old has become a hot commodity because of his two-way play and affordable contract. However, it’s not a certainty Armstrong will trade Dvorak. Morgan suggests it would take a significant offer of either a couple of prospects or a prospect and a first-round pick.

The Boston Bruins expressed interest in Dvorak and could use another center after David Krejci’s departure. Other teams linked to the Coyotes center include the Montreal Canadiens, Ottawa Senators and his hometown Chicago Blackhawks.

SPECTOR’S NOTE: Dvorak’s situation could be worth monitoring through training camp and leading up to the start of this season in mid-October. That’s when teams will evaluate their rosters and determine if they need to turn to the trade market for help. One of them could make an offer for Dvorak too good for Armstrong to pass up.

Gretz also suggested the Coyotes consider shopping Clayton Keller. Under contract for seven more seasons at $7.15 million annually, the 23-year-old forward is in theory one of the players they should build around. However, if they weren’t going to keep a key player like Conor Garland, what’s the point of holding onto Keller at this point?

SPECTOR’S NOTE: Gretz believes no one should be kept out of trade discussions with the rebuild underway. However, Morgan hasn’t mentioned Keller as a trade candidate. Neither did Sportsnet’s Elliotte Friedman in his latest podcast. Perhaps Armstrong sees Keller as one of a small core of players to build around.

COULD THE OILERS PURSUE KHUDOBIN?

EDMONTON JOURNAL: David Staples wondered if the Oilers should make a pitch for Dallas Stars goaltender Anton Khudobin. The Stars need to move out a goalie and the Oilers need one.

The Stars have a crowded crease with Khudobin, Ben Bishop, Braden Holtby and Jake Oettinger. Bishop, however, could be sidelined for the upcoming season with a knee injury. It was assumed they’d start this season with Khudobin and Oettinger but the addition of Holtby raised questions about their intentions in goal and whether one of them could be used as a trade chip.

Staples believes the Oilers would have to find someone to take Mikko Koskinen off their hands before acquiring Khudobin. That could include adding a sweetener in the deal with Koskinen. It also depends on whether the Oilers are on Khudobin’s four-team no-trade list.

The Stars’ plan could be to put Bishop on long-term injury reserve, demote Oettinger to the minors (he’s waiver-exempt this season) and start with Khudobin and Holtby. However, if they can move Khudobin it would free up cap space to sign a forward.

SPECTOR’S NOTE: That seems to be the game Stars GM Jim Nill is playing. Bishop’s career could be in jeopardy but for now, he faces an uncertain future regarding this season. Adding Holtby gives them the opportunity to shop Khudobin and go with a Holtby-Oettinger tandem. If there’s no immediate market for Khudobin, they send Oettinger to the minors until a new home for the 35-year-old veteran netminder and his $3.33 million cap hit is found.

The Oilers’ situation could be more complicated. Koskinen’s $4.5 million cap hit, inconsistent play and 15-team no-trade list make him difficult to move unless the Oilers are willing to retain salary or package him with a quality prospect or draft pick. Even then, there’s no certainty they can land Khudobin or any other suitable replacement at this point. The Oilers could be starting this season with Koskinen backing up Smith again.

← NHL Morning Coffee Headlines - August 4, 2021 NHL Morning Coffee Headlines - August 5, 2021 →
We use cookies on our website to give you the most relevant experience by remembering your preferences and repeat visits. By clicking “Accept”, you consent to the use of ALL the cookies.
Do not sell my personal information.
Cookie SettingsAccept
Manage consent