STLTODAY.COM: Jim Thomas reports Vladimir Tarasenko said little about his tumultuous offseason in which he requested a trade from the St. Louis Blues during an interview yesterday. Asked if he was disappointed he hadn’t been moved, the 29-year-old right winger said it’s behind him now. 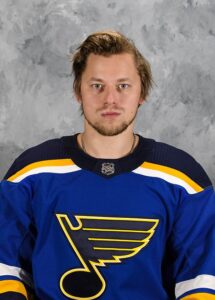 “I don’t see any reason to discuss it now,” said Tarasenko. “Camp starts. I don’t want to be a distraction in the room. I’m here to work. I’m healthy, I’m happy to play hockey again.” He also added he and his family love living in St. Louis and are grateful to the fans for their support.

Tarasenko had been taking part in informal skates with his Blues teammates in St. Louis prior to training camp opening this week.

Ben Frederickson believes Tarasenko’s actions will speak louder than his few words. He pointed out sources speaking on the winger’s behalf during the summer critiqued the Blues’ handling of his shoulder injuries, to management’s handling of his trade request, to the club picking Ryan O’Reilly as team captain over him.

Frederickson said team owner Tom Stillman and general manager Doug Armstrong weren’t going to be strong-armed into making a trade. He also indicated Tarasenko’s market wasn’t what the winger thought it was due to his shoulder injuries, declining production and hefty contract.

Nevertheless, Frederickson believes the Blues have a potential problem on their hands bringing back a player who has made it clear he wants to go.

SPECTOR’S NOTE: Tarasenko’s presence shouldn’t be an issue as long as he’s getting along with his teammates and the coaching staff. If he stays healthy and his production improves it’ll help his trade value. However, it’s unlikely the Blues will move him if they’re in playoff contention this season.

They could wait until next summer to move Tarasenko when he’ll only have one year remaining on his contract. His cap hit ($7.5 million) is expensive enough but he’s also earning $9.5 million in actual salary this season. He’ll earn a more palatable $5.5 million next season. He also has a full no-trade clause which will limit where the Blues can ship him.

TSN: Toronto Maple Leafs general manager Kyle Dubas shot down trade speculation about Ilya Mikheyev on Wednesday. Asked about Mikheyev’s trade request, Dubas said the 26-year-old winger was going to be on the team “and is going to be a big part of the team.” He referred questions about the trade request to Mikheyev’s agent.

SPECTOR’S NOTE: Mikheyev seemed to back away from the question about his trade request when asked about it yesterday. His agent, Daniel Milstein, declined to comment. It’s believed that request was based on his limited playing time last season. By the sound of things, he’ll be getting a bigger role with the Leafs.

TSN’s Shawn Simpson recently speculated Logan Brown could be plucked off waivers by the Arizona Coyotes if things don’t work out for him with the Ottawa Senators. He spent the summer in Arizona and is close with Coyotes stars Clayton Keller and Jakob Chychrun.

NESN: The Boston Bruins could be interested in Sami Niku following the recent termination of the 24-year-old defenseman’s contract with the Winnipeg Jets.

← NHL Morning Coffee Headlines - September 24, 2021 NHL Morning Coffee Headlines - September 25, 2021 →
We use cookies on our website to give you the most relevant experience by remembering your preferences and repeat visits. By clicking “Accept”, you consent to the use of ALL the cookies.
Do not sell my personal information.
Cookie SettingsAccept
Manage consent