​Kyle Beach identified himself as one of the victims in the Blackhawks’ scandal, the ongoing fallout from the investigation, plus game recaps and more in today’s NHL morning coffee headlines.

TSN: Former Chicago Blackhawks player Kyle Beach stepped forward as the player at the center of the investigation into allegations of sexual assault by former video coach Bradley Aldrich. 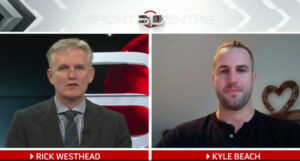 In an emotional 25-minute interview with Rick Westhead, Beach expressed relief and vindication that “it was no longer my word against everybody else’s,” adding it was “very special and important to me to have that truth come out yesterday”.

Beach recalled what happened to him after the abuse by Aldrich, the Blackhawks’ organization’s efforts to cover up the incident and its subsequent denials. “They said they did an investigation, they said my claims were meritless. To me, I took that as them saying to the world that I was a liar, that I was lying,” said Beach.

He singled out the role of then-head coach Joel Quenneville in the club’s handling of the incident. Quenneville said in a statement this summer that he has no prior knowledge of Beach’s claims at the time until he heard about it through the media.

Multiple players with the Blackhawks at that time also subsequently made the same claim. “I believe everyone in the locker room knew about it,” said Beach.

He also voiced his disappointment over the NHLPA’s lack of action when he informed them of the details. He believed two different people spoke with PA director Donald Fehr. “And for him to turn his back on the players when his one job is to protect the players at all cost, I don’t know how that can be your leader,” he said.

Beach said he stepped forward in part because, while the report referred to him as “John Doe”, the details made it possible to figure out his identity. He indicated it was also part of his recovery as a survivor of sexual assault. He also wants to bring about change within the NHL to assure this never happens again.

“The NHL has let me down and they’ve let other down too. And they continue to try to protect their name,” said Beach. “I hope through and through that (NHL commissioner) Gary Bettman takes this seriously and that he does his due diligence.”

SPECTOR’S NOTE: I’ve noted what I felt were key highlights from Beach’s interview. I encourage everyone to follow the above link for the video interview and the full transcript.

Beach was very brave to come forward with his story. It was heartbreaking watching him recount what happened, at one point breaking down in tears and expressing sorrow for not doing more to protect Aldrich’s subsequent victim. He did nothing wrong and yet he still felt remorse that he didn’t do more.

Kyle Beach was failed by the Blackhawks at every level. Only a handful of people, including former teammates Nick Boynton and Brent Sopel, former associate coach John Torchetti and former skills coach Paul Vincent, stood by him. He endured over 11 years of trauma before finally receiving a measure of justice. Everyone involved in make his life hell for over a decade bear full responsibility for what they didn’t do to help him and for what they did to cover it up.

The release of the investigation’s findings and Beach’s interview are not the end of this story. The repercussions are ongoing and will be long-lasting, leading hopefully to positive change that ensures no player ever faces what Beach did.

TSN: The Blackhawks released a statement following Beach’s interview expressing “deepest apologies” for what he went through and the organization’s failure to properly respond when he brought the matter to light. The statement laid the blame on former team executives.

NHLPA director Donald Fehr also issued an apology to Beach, acknowledging his courage in telling his story and admitting the system (of which the PA is a part) failed him. Fehr indicated the person Beach spoke with at the NHLPA was one of the program doctors in the player assistance program. While confidential between players and doctors, Fehr said the “grave nature of this incident should have resulted in further action on our part.” He also said the PA is committed to making changes to ensure it doesn’t happen again.

Blackhawks stars Patrick Kane and Jonathan Toews told reporters last night they wished they knew more about what happened to Beach so they could’ve done more to help him. They said they didn’t he was the John Doe in the investigation until he came forward yesterday. Kane commended Beach for his courage in telling his story while Toews said he didn’t know about the allegations until training camp in 2010-11.

Both players also commented on Blackhawks GM Stan Bowman stepping down and senior VP of hockey operations Al MacIsaac being relieved of his duties. Kane considered it “necessary” and “the right moves” but also called Bowman “a great man who did a lot of things for me personally”. Toews felt they weren’t directly responsible for what happened and still had a lot of respect for them.

SPECTOR’S NOTE: As The Athletic’s Mark Lazerus said in response to those remarks, I get why Kane and Toews are remaining loyal to those who played a big role in their lives and careers but heaping praise on those two isn’t a great look.

Former Blackhawks head coach and current Florida Panthers bench boss Joel Quenneville stood by his statement to investigators that he first learned of the allegations through the media this summer. He’s slated to meet with commissioner Bettman in New York today. Quenneville was behind the bench for the Panthers’ 4-1 win over the Boston Bruins last night and didn’t speak to the media following the game.

WINNIPEG FREE PRESS: Mike McIntyre reports Jets ownership is supporting general manager Kevin Cheveldayoff, who will be meeting with Bettman in New York on Monday. Cheveldayoff was the Blackhawks assistant general manager in 2010 and was named in the report as part of the group of Blackhawks executives who met to discuss the allegations in May 2010.

In his statement, Cheveldayoff said he was first made aware of the allegations during that meeting. He believed a decision was reached by his superiors to have the hockey operations people deal with the on-ice production while they would handle the Aldrich allegations.

SPECTOR’S NOTE: We don’t know what Bettman has in store for Quenneville and Cheveldayoff. Many on social media are calling for their firings or at least suspension.

NHL.COM: The Florida Panthers extended their record to 7-0-0 by defeating the Boston Bruins 4-1. Sergei Bobrovsky made 30 saves for the win while Gustav Forsling collected three assists.

Cam Atkinson scored two goals and Carter Hart kicked out 34 shots as the Philadelphia Flyers beat the Edmonton Oilers 5-3, snapping the latter’s five-game season-opening win streak. Connor McDavid had a goal and an assist for the Oilers.

Detroit Red Wings captain Dylan Larkin tallied in overtime as his club overcame a 2-0 deficit for a 3-2 victory over the Washington Capitals. Alex Ovechkin and Evgeny Kuznetsov tallied for the Capitals.

The Toronto Maple Leafs also rallied from 2-0 to defeat the Chicago Blackhawks 3-2. William Nylander scored in overtime for the Leafs. Blackhawks captain Jonathan Toews came out of COVID-19 protocol yesterday and played in this game.

An overtime goal by Evgenii Dadonov lifted the Vega Golden Knights to a 3-2 win over the Dallas Stars. Jonathan Marchessault scored late in the third for Vegas to send the game into the extra frame.

LOS ANGELES TIMES: Kings defenseman Drew Doughty will miss the next two months with a bruised knee while Sean Walker suffered season-ending ligament tears in his right knee that will require surgery.

WINNIPEG SUN: Jets captain Blake Wheeler has returned to practice after 10 days in isolation as per NHL COVID protocols.

THE HOCKEY NEWS: Minnesota Wild general manager Bill Guerin is expected to be named GM of the USA Men’s Olympic Hockey Team at the 2022 Beijing Games.