THE ATHLETIC: (subscription required): In a recent mailbag segment Fluto Shinzawa was asked about the odds of the Boston Bruins trading for a second-line center and the cost of acquiring someone like the San Jose Sharks Tomas Hertl. He believes the Bruins will turn to outside help if they can’t suitably address that issue internally. Someone like Hertl could cost at least a first-round pick and a prospect.

SPECTOR’S NOTE: That’s also going to be the cost for every team interested in Hertl if the Sharks decide to move him before the March 21 trade deadline. The Bruins could get outbid by teams carrying a deeper prospect pool. 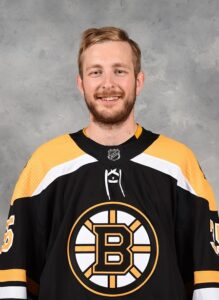 Shinzawa expects the Bruins will keep the door open for Tuukka Rask. The veteran goaltender’s recovery from offseason hip surgery, how much he’ll seek on a new contract, the club’s position in the standings and the playoff of Linus Ullmark and Jeremy Swayman are among the variables to be considered.

SPECTOR’S NOTE: Ullmark’s shaky preseason has some Bruins followers concerned and looking forward to Rask’s return. His regular-season play, however, could be key to Rask’s future with the Bruins.

One reader asked if the Bruins might attempt to trade Ullmark for a second-line center if Swayman plays well and Rask is healthy. “No chance,” replied Shinzawa, pointing out the 28-year-old old Ullmark has a full no-movement clause for the next two seasons.

SPECTOR’S NOTE: If the Bruins decide to bring back Rask for another season, Ullmark becomes his backup and Swayman gets demoted regardless of performance because he’s waiver-exempt this season.

It’s doubtful the Bruins pursue Jack Eichel. There are too many questions about the health of the Buffalo Sabres captain. “It would be irresponsible to give up assets if he is at significant risk of a bad outcome,” writes Shinzawa.

SPECTOR’S NOTE: That applies to every other team that expressed some interest in acquiring Eichel. They could all be waiting until he finally undergoes disc replacement or neck fusion surgery and makes a full recovery before making serious bids for him.

← NHL Morning Coffee Headlines - October 4, 2021 NHL Morning Coffee Headlines - October 5, 2021 →
We use cookies on our website to give you the most relevant experience by remembering your preferences and repeat visits. By clicking “Accept”, you consent to the use of ALL the cookies.
Do not sell my personal information.
Cookie SettingsAccept
Manage consent