​No changes yet for the Canucks, an update on Samuel Girard, and the latest on the Rangers in today’s NHL rumor mill.

NO CHANGES COMING FOR CANUCKS

TSN: Darren Dreger reported Vancouver Canucks owner Francesco Aquilini met yesterday with general manager Jim Benning to discuss the club’s poor on-ice performance this season. However, there aren’t any changes coming to the Canucks, “at least not yet”, according to Dreger. It’s believed Aquilini will remain patient but the expectation is the results on the ice must change. 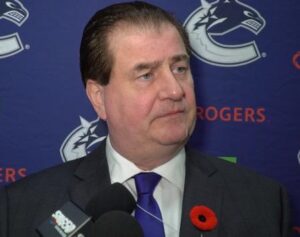 SPECTOR’S NOTE: That isn’t going to stop speculation that Benning and head coach Travis Green are on thin ice. After reaching the playoffs in 2019-20, they got a mulligan for missing the postseason last season because of the shortened schedule, the outbreak of COVID-19 that decimated the roster in April and Elias Pettersson’s season-ending injury in March.

After a 3-2-1 start, the Canucks are 2-7-1 in their last 10 games. They’re six points out of a wild-card berth in the Western Conference and in danger of falling so far behind that they’ll be unable to make up the lost ground over the remainder of the season.

Aquilini’s patience will be tested if the Canucks fail to make significant improvement over the next two or three weeks. Another stretch like the last 10 games could spell the end for Benning and Green.

THE ATHLETIC: Pierre LeBrun reports the Colorado Avalanche isn’t interested in shopping Samuel Girard. The 23-year-old defenseman is in the second season of a seven-year contract with an affordable $5 million annual average value.

LeBrun suspects the Girard trade chatter was a result of the Jack Eichel trade talk over the past few months. He said the Avalanche did inquire about Eichel but he doesn’t believe the talks got very far.

SPECTOR’S NOTE: The Girard trade speculation originated with The Denver Post’s Mark Chambers, who speculated the blueliner could become expendable with young Bowen Byram stepping up as a top-four rearguard. LeBrun doesn’t rule out the possibility of Girard getting moved if the Avalanche received an offer too good to refuse but said the club isn’t interested in moving him.

NEW YORK POST: Larry Brooks examined what the Rangers could do to address the loss of forward Sammy Blais to a season-ending knee injury. They were already thin up front, especially after winger Vitali Kravtsov’s departure to Russia to await a trade.

Brooks wondered if they could interest the Los Angeles Kings in a swap of Kravtsov’s rights for recently demoted center Gabriel Vilardi. For now, he thinks general manager Chris Drury will look within his system to address the issue before turning to the trade market.

SPECTOR’S NOTE: Most general managers tend to look to within for replacements before seeing what’s available in the trade market. If there was interest in Kravtsov’s rights he would’ve been moved by now. The Kings don’t seem to be in any hurry to dangle Vilardi in the trade market.

← NHL Morning Coffee Headlines - November 17, 2021 NHL Morning Coffee Headlines - November 18, 2021 →
We use cookies on our website to give you the most relevant experience by remembering your preferences and repeat visits. By clicking “Accept”, you consent to the use of ALL the cookies.
Do not sell my personal information.
Cookie SettingsAccept
Manage consent