Are the Golden Knights any closer to a deal with the Sabres for Jack Eichel? What could it cost the Flames to acquire him? Read on the latest in today’s NHL rumor mill.

THE JEFF MAREK SHOW: Elliotte Friedman spoke to Marek on Monday about the latest developments in trade talks between the Vegas Golden Knights and Buffalo Sabres regarding a possible deal for Jack Eichel.

Talks got “pretty hot” last week but then cooled. Friedman believes both sides know where they stand and what the issues are. If the Sabres aren’t going to retain any portion of Eichel’s salary, they’ll need to find a third team to help facilitate the deal. That might not be easy as you’d be asking that third team to absorb part of Eichel’s cap hit for the next five years. He wondered what that’s worth to that club.

Friedman also said the talk of Eichel filing a grievance got pushed off last week. However, he’s not sure where that stands right now.

SPECTOR’S NOTE: A deal involving a third team perhaps would’ve been done by now if Eichel only had a year or two left on his contract. Asking a club to pick up part of his $10 million annual cap hit for five years is another matter. That’s going to require more than just a first-round pick or a top prospect. It could cost a good young NHL player to be a sufficient sweetener. 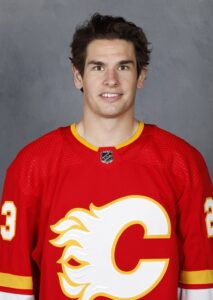 THE BUFFALO NEWS: Mike Harrington also noted the Sabres’ unwillingness to retain part of Eichel’s cap hit. Pointing out the growing number of Golden Knights players sidelined by injury (Max Pacioretty, Mark Stone, Alex Tuch and William Karlsson), they could use long-term injury reserve to free up cap space for Eichel this season. However, they’ll have to become cap compliant when those players and Eichel return to the lineup later in the season.

Harrington speculates Sabres general manager Kevyn Adams could be contemplating multiple deals. He pointed to NHL Network analyst Kevin Weekes saying not to sleep on the Calgary Flames as a suitor. The Flames lack depth in prospects compared to the Golden Knights, Anaheim Ducks and Los Angeles Kings but the Sabres’ strong start to this season could have Adams seeking more immediate help for his roster.

Flames winger Matthew Tkachuk is probably not in play. Harrington wonders if Elias Lindholm or Sean Monahan might be available. He also noted Flames VP of hockey operations Don Maloney was spotted at the Sabres’ recent games against the Ducks and Kings.

Harrington observes Adams isn’t under any pressure to move Eichel during the season until the center’s no-movement clause kicks in next July. Eichel could file a grievance but it’s not certain he’d win that with the Sabres’ position on his medical treatment supported by the NHL’s collective bargaining agreement.

SPECTOR’S NOTE: Time is on the Sabres side for now. That won’t be the case if we get to July and no deal has been found for Eichel. The 25-year-old center will then have more leverage over where he could be traded, though by that point he might not be too picky over where he goes.

THE ATHLETIC: In a recent mailbag segment, Hailey Salvian was asked what assets she would give up if she were the Flames general manager. She considers Tkachuk and Andrew Mangiapane as untouchable. Johnny Gaudreau, Noah Hanifin and Rasmus Andersson are likely “aged out” for the Sabres plus Gaudreau’s a pending UFA.

Salvian suggested Matthew Coronato, Connor Zary, Jakob Pelletier, Dillon Dube, Juuso Valimaki and future first-round selections as potential tradeable assets for Eichel. Finding sufficient cap space for Eichel means shedding salary. She wondered if the Sabres would take Monahan as part of the return. Her proposed offer would be Monahan, Zary, Pelletier, a 2022 first-round pick and perhaps a prospect as a sweetener for accepting Monahan in the deal.

SPECTOR’S NOTE: Complicating all this, of course, is how to shed sufficient salary to make this work. Cap Friendly shows the Flames just over $1 million in cap space for this season. Putting Monahan and his $6.375 million AAV in the deal certainly helps but they’ll need to include another salaried player or two or conduct a separate cost-cutting swap with another club. They could try packaging Monahan, Dube and Valimaki (combined $10.225 million) for Eichel but that risks depleting their roster depth.

Monahan, by the way, has a 10-team no-trade clause and might not be keen to join the Sabres. Lindholm ($4.85 million) lacks no-trade protection but the Flames would have to move even more salary in that scenario to make room for Eichel.

← NHL Morning Coffee Headlines - November 2, 2021 NHL Morning Coffee Headlines - November 3, 2021 →
We use cookies on our website to give you the most relevant experience by remembering your preferences and repeat visits. By clicking “Accept”, you consent to the use of ALL the cookies.
Do not sell my personal information.
Cookie SettingsAccept
Manage consent