​The Golden Knights face a potential salary-cap crunch after acquiring Jack Eichel plus speculation on the Flames’ next move after losing the Eichel sweepstakes in today’s NHL rumor mill.

MORE TRADES TO COME FOR THE GOLDEN KNIGHTS? 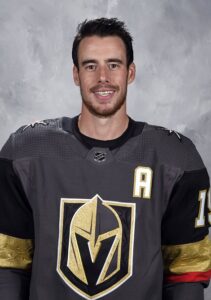 Eichel, Stone and Pacioretty are on long-term injury reserve, giving the Golden Knights some flexibility for now. However, they’ll have to shed about $10 million in cap space when the trio returns to action later in the season. With $78.395 million invested in 16 players for 2022-23, more cost-cutting moves could take place in the offseason.

LAS VEGAS SUN: Justin Emerson believes the Golden Knights can shed around $3 million by “moving off” Jonas Rondbjerg, Jake Leschyshyn, Michael Amadio and Ben Hutton. A $5 million winger such as Reilly Smith or Evgenii Dadonov could become a cost-cutting casualty. Smith seems the likely candidate as he’s slated to become an unrestricted free agent in July. They could also attempt to shop a defenseman like Brayden McNabb ($2.5 million), who’s also a UFA next summer.

SPECTOR’S NOTE: Those players Emerson suggested the Golden Knights “move off” each make under $1.125 million and thus their full salaries can be buried in the minors. The rest, however, will involve a salary-dumping deal. The Golden Knights will likely want only draft picks, prospects, or a player earning less than $1 million in return.

Smith and McNabb could draw interest from playoff contenders as the trade deadline draws closer. We can expect to hear more Golden Knights trade speculation at some point between January and the March 21 trade deadline as those sidelined stars start returning to the lineup.

TSN: Pierre LeBrun reported Buffalo Sabres general manager Kevyn Adams denied rumors the Calgary Flames offered up winger Matthew Tkachuk as part of their offer for Jack Eichel. However, he said the Flames came very close to landing Eichel as one of the few clubs willing to acquire him presurgery.

LeBrun said the Carolina Hurricanes kept tabs on the Eichel trade talk but the Sabres wanted promising forward Seth Jarvis or forward Martin Necas as part of a package return. The Arizona Coyotes were also interested in being a third-party broker to absorb part of Eichel’s cap hit in exchange for a draft pick but the Golden Knights were able to do it on their own.

THE ATHLETIC: Hailey Salvian heard from sources that, at the time of ESPN’s report listing the Flames and Golden Knights as finalists for Eichel, the question wasn’t which team would get him but when he’d go to Vegas. That didn’t stop the Flames from trying to swing a deal including draft picks, prospects and a roster player but they didn’t offer up anyone comparable to Peyton Krebs, the prospect the Sabres eventually received from the Golden Knights.

Salvian also cited multiple sources saying the report about Tkachuk being offered didn’t come from the Flames camp. It appears Flames GM Brad Treliving spoke with Tkachuk on Wednesday regarding the rumor. The winger said he wasn’t concerned about it. Smoothing the situation was important so as not to have it affect contract negotiations next summer when Tkachuk becomes a restricted free agent with arbitration rights.

Salvian believes the Flames’ interest in Eichel confirms they’re in the market for a center. She wondered if they might turn their focus toward San Jose’ Tomas Hertl. He’s slated to become a UFA next summer and wouldn’t cost as much to acquire as Eichel.

SPECTOR’S NOTE: Treliving made the right decision to speak with Tkachuk and clarify the situation. However, I wonder if he did the same for Sean Monahan, who also popped up in the Eichel trade chatter. Monahan is signed through 2022-23 and carries a 10-team no-trade list. Perhaps the latter made it unnecessary for Treliving to have a similar discussion with him.

The Flames will have to wait a while if they do turn their sights to Hertl. He’s hopeful of opening contract extension talks with Sharks GM Doug Wilson at some point in the season. The 27-year-old center could become available by the March 21 trade deadline if those contract discussions fail to materialize or an agreement on an extension cannot be reached before then.

← NHL Morning Coffee Headlines - November 5, 2021 NHL Morning Coffee Headlines - November 6, 2021 →
We use cookies on our website to give you the most relevant experience by remembering your preferences and repeat visits. By clicking “Accept”, you consent to the use of ALL the cookies.
Do not sell my personal information.
Cookie SettingsAccept
Manage consent