NHL.COM: The Boston Bruins retired hockey pioneer Willie O’Ree’s No. 22 in a pregame ceremony last night. It was the 64th anniversary of O’Ree’s debut as the first black player in NHL history with the Bruins, becoming the 12th player in franchise history to have his number retired. 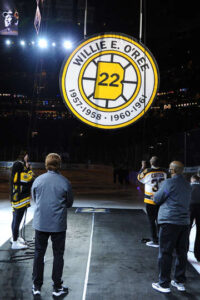 Following the ceremony, the Bruins were thumped by the Carolina Hurricanes 7-1. Jesperi Kotkaniemi scored two of the Hurricanes’ five goals in the first period while Jaccob Slavin and Tony DeAngelo each finished the night with three points. Bruins goalie Tuukka Rask was pulled after giving up five goals on 12 shots. The Hurricanes are tied with the New York Rangers atop the Metropolitan Division with 54 points but hold three games in hand while the Bruins hold the final wild-card berth in the Eastern Conference with 46 points.

Johnny Gaudreau collected four assists as the Calgary Flames snapped a four-game losing skid to drop the Florida Panthers 5-1, ending the latter’s nine-game points streak. Sean Monahan scored twice and Matthew Tkachuk collected three points. Sam Bennett scored for the Panthers in his first game in Calgary since being traded to Florida last season. The Flames (42 points) move within two points of the San Jose Sharks for the final wild-card spot in the Western Conference. The Panthers (57 points) slip to second in the overall standings.

Victor Hedman scored twice and chipped in an assist to give the Tampa Bay Lightning a 6-4 victory over the Los Angeles Kings. Despite playing with 12 forwards and four defensemen, the shorthanded Lightning picked up their fourth straight win to regain first place in the overall standings with 59 points. The Kings (45 points) remain in second place in the Pacific Division.

Washington Capitals captain Alex Ovechkin tallied his league-leading 27th goal in a 4-3 win over the Winnipeg Jets. Tom Wilson netted the game-winner in overtime as the Capitals (53 points) sit one point behind the second-place Rangers in the Metropolitan Division. Jets winger Nikolaj Ehlers could be sidelined for more than one game after leaving in the third period following a knee-on-knee collision with Capitals defenseman Dmitri Orlov. With 40 points, the Jets are two back of the Flames.

The Vancouver Canucks got a 31-save performance from Thatcher Demko to down the Nashville Predators 3-1, handing the latter their fourth straight defeat. Brock Boeser and Elias Pettersson each scored for the Canucks, who sit one point behind the Jets. The Predators, meanwhile are third in the Central Division with 51 points.

New York Islanders forward Oliver Wahlstrom scored in the ninth round of a shootout to give his club a 4-3 victory over the Philadelphia Flyers, who’ve lost nine straight games. Semyon Varlamov turned aside 31 shots to give the Isles their sixth win in their last eight games. Earlier in the day, the Flyers announced center Kevin Hayes will miss the next three to four weeks following a procedure to drain fluid from his adductor region.

Buffalo Sabres goalie Michael Hauser kicked out 43 shots in his season debut to backstop his club over the Ottawa Senators 3-1. Alex Tuch and Dylan Cozens each had a goal and an assist for the Sabres.

Montreal Canadiens netminder Sam Montembault turned aside a career-high 48 shots in a 5-3 victory over the slumping Dallas Stars. Christian Dvorak scored twice while Tyler Toffoli had a goal and an assist in his first game back with the Canadiens since Nov. 20. The Stars have dropped three straight and slip one point behind the Canucks.

SPECTOR’S NOTE: The Hughes hiring received widespread acclaim among NHL pundits. He built up an excellent reputation during his years as an agent. He understands the business of hockey, especially dealing with players and negotiating contracts.

Canadiens Executive VP of Hockey Ops Jeff Gorton is good friends with Hughes and reportedly wanted him for the job from the start. However, the latter apparently needed some convincing before agreeing to a five-year deal with the Canadiens.

This hiring should allay concerns among some Canadiens followers that Gorton was seeking a frontman while he pulled the management strings. Hughes wouldn’t have left his lucrative gig to be a puppet GM even for a friend.

Hughes and Gorton now face the daunting challenge of rebuilding a Canadiens roster seriously depleted by injuries to superstars Carey Price and Shea Weber, the departures of leaders such as Phillip Danault and Corey Perry to free agency, and significant talent gaps in the roster. They must decide the fate of embattled head coach Dominique Ducharme, who has two years remaining on his contract.

NHL.COM: The NHL and NHLPA announced it will stop testing asymptomatic players, coaches and staff who are fully vaccinated following the All-Star Break in early February, saying COVID-19 cases are declining around the league. The current testing policy will remain in place until Feb. 3.

Testing of asymptomatic individuals will continue when it is needed for crossing the Canada-US border. One negative test result will be required for players to return to team facilities following the All-Star break. The 90-day testing “holiday” for those who have recovered from COVID-19 will remain in place. Both sides also agreed to maintain the five-day isolation period for those who test positive.

SPECTOR’S NOTE: The NHL and NHLPA want to avoid any further game postponements that could jeopardize their intent of ending the regular season on April 29. It also appears they don’t want rosters to become significantly depleted as teams jockey for playoff positioning over the final half of the schedule.

AWFUL ANNOUNCING: Edmonton Oilers star Leon Draisaitl got into a testy exchange yesterday with Edmonton Journal reporter Jim Matheson during a press conference yesterday. At one point, Matheson asked Draisail, “Why are you being so pissy?” after the forward declined to give much of an answer to one of his questions.

SPECTOR’S NOTE: The Oilers’ poor play of late now seems to have ratcheted up tensions between the players and some of the reporters covering the club. Maybe Draisaitl should’ve been more forthcoming but most hockey players talk in cliches when addressing the media so I don’t know what answer Matheson thought he was going to get out of him with that catty remark.