​Will the Lightning or Wild make moves at the trade deadline? Which Sharks could become trade candidates? Find out in today’s NHL rumor mill.

THE ATHLETIC: Joe Smith recently examined whether the Tampa Bay Lightning will make any moves by the March 21 trade deadline. General manager Julien BriseBois indicated nothing was off the table if a move could be made to improve their chances of winning the Stanley Cup for the third straight year.

Complicating things, however, is the fact that the Lightning has no cap space for this season and very little for next season. Making additions would mean subtracting someone from their roster and they’ve already got some very good value contracts. They also like the additions they made last summer in Pierre-Edouard Bellemare, Corey Perry and Zach Bogosian.

If BriseBois makes a move, Smith believes it’ll be for depth players along the lines of his acquisitions of Blake Coleman and Barclay Goodrow two years ago. He thinks the Bolts GM would part with multiple high picks if it means landing an impact player, especially one who could become a replacement for pending unrestricted free agent winger Ondrej Palat. 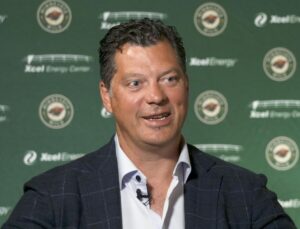 SPECTOR’S NOTE: BriseBois could be a buyer if one or more of his players carrying a significant cap hit winds up on long-term injury reserve for the remainder of the regular season. While that worked to their advantage last season when Nikita Kucherov missed the entire 2020-21 regular season recovering from hip surgery, they might not get a similar opportunity again. If he makes an addition, it’ll be an affordable depth player. The Lightning still has a very talented roster that could make a run for a third Cup.

Guerin downplayed the notion his club needs depth at center. He’s also reluctant to tinker too much with the Wild’s tight team chemistry. It’s possible he trades for a depth forward than a high-end piece like Philadelphia’s Claude Giroux, Dallas’ Joe Pavelski or San Jose’s Tomas Hertl.

The Wild GM also has to keep in mind the cap constraints he faces after this season as a result of buying out Zach Parise and Ryan Suter last summer.

SPECTOR’S NOTE: I’d still keep an eye on the Wild, especially if they start to wobble over the next few weeks. Still, there won’t be much reason to make a big addition if they continue playing well leading up to March 21.

SPECTOR’S NOTE: Peng spoke with two NHL scouts and a league executive about the possible returns for those players. It appears they would fetch third-to-fifth-round picks. Bonino, Nieto and Reimer each have a year remaining on their contracts.

← NHL Morning Coffee Headlines - February 21, 2022 NHL Morning Coffee Headlines - February 22, 2022 →
We use cookies on our website to give you the most relevant experience by remembering your preferences and repeat visits. By clicking “Accept”, you consent to the use of ALL the cookies.
Do not sell my personal information.
Cookie SettingsAccept
Manage consent