Giordano to the Leafs, Hamonic to Senators, Hagg to Panthers

​The Seattle Kraken have traded defenseman Mark Giordano and forward Colin Blackwell to the Toronto Maple Leafs in exchange for a second-round pick in the 2022 draft, a second-rounder in 2023, and a 2022 third-round pick. The Kraken also retain 50 percent of Giordano’s $6.75 million cap hit.

SPECTOR’S NOTE: Leafs general manager Kyle Dubas said he wouldn’t part with a first-round pick or a top prospect for a rental player. He got himself an excellent top-four defenseman with Giordano without having to sacrifice too much in return. 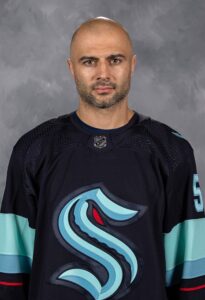 The Leafs needed a top-four blueliner with Jake Muzzin still sidelined indefinitely by a head injury. Giordano isn’t a physical shutdown rearguard like Muzzin but his mobility, two-way skills and leadership should prove a welcome addition as a playoff rental to their defense corps.

Winner of the Norris Trophy in 2019, the 38-year-old Giordano put up a respectable 23 points in 55 games with the low-scoring Kraken. His puck-moving skills should prove a good fit with the Leafs’ potent offense.

Blackwell, 28, can play center or wing and is also slated to become an unrestricted free agent this summer. He has a decent scoring touch, netting 12 goals and 22 points in 47 games last season with the New York Ranger. Blackwell’s versatility gives the Leafs some flexibility to slot him into a variety of roles should injuries strike.

To free up some additional salary cap room, the Leafs traded defenseman Travis Dermott to the Vancouver Canucks in exchange for the Canucks’ third-round pick in 2022.

The Kraken reportedly sought a first-round pick for Giordano but the number of potential trade partners was shrinking with Hampus Lindholm acquired by the Boston Bruins and the Florida Panthers dealing for Ben Chiarot. Getting two seconds should help them select a pair of promising youngsters to stock up their prospect pipeline.

The Ottawa Senators acquired defenseman Travis Hamonic from the Vancouver Canucks in exchange for a third-round pick (originally belonging to the Canucks) in 2022.

SPECTOR’S NOTE: Hamonic is in the first year of a two-year deal with an annual average value of $3 million. A physical two-way defenseman, the 31-year-old has been sidelined in recent years dealing with injuries and personal matters.

The Canucks wanted to shed salary to garner some cap flexibility heading into the offseason. It remains to be seen if this move is to clear room to re-sign restricted free agent Brock Boeser or the first of other cost-cutting deals.

The Canucks used their recently reacquired pick to bring in Travis Dermott from the Leafs. He’ll get a great opportunity for more playing time in Vancouver. He’s signed through 2022-23 with a $1.5 million cap hit.

The Buffalo Sabres trade defenseman Robert Hagg to the Florida Panthers in exchange for a sixth-round pick in the 2022 draft.

SPECTOR’S NOTE: Panthers blueliner Aaron Ekblad is expected to be placed on long-term injury reserve with a lower-body injury for the remainder of the regular season. That provides the Panthers with some cap flexibility to add more depth to their lineup for the postseason. Hagg, 27, is a stay-at-home rearguard with an affordable $1.6 million cap hit.

← Winning The NHL Trade Deadline Doesn't Guarantee A Stanley Cup NHL Morning Coffee Headlines - March 21, 2022 →
We use cookies on our website to give you the most relevant experience by remembering your preferences and repeat visits. By clicking “Accept”, you consent to the use of ALL the cookies.
Do not sell my personal information.
Cookie SettingsAccept
Manage consent