NHL.COM: Claude Giroux had two assists in his debut with the Florida Panthers as they held off the Montreal Canadiens 4-3. Former Montreal defenseman Ben Chiarot picked up an assist in his first game against his former team. Canadiens blueliner Jeff Petry left the game in the second period with a lower-body injury. The Panthers (92 points) move one point ahead of the Carolina Hurricanes for first place in the Eastern Conference standings.

Speaking of the Hurricanes, they dropped a 4-3 decision to the Dallas Stars on a shootout goal by Tyler Seguin. Scott Wedgewood picked up the win with a 44-save performance while Roope Hintz scored twice in regulation. Nino Niederreiter netted two goals for the Hurricanes. The Stars (74 points) remain one point ahead of the Vegas Golden Knights for the final wild-card spot in the Western Conference. 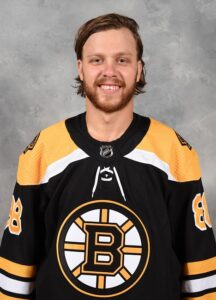 Boston Bruins winger David Pastrnak tallied his 12th career hat trick in a 3-2 victory over the Tampa Bay Lightning. Erik Haula collected three assists and Hampus Lindholm collected an assist in his first game with Boston. The Bruins (85 points) move into third place in the Atlantic Division, knocking the Lighting into the first Eastern Conference wild-card berth. They’re also tied with the Leafs but the latter holds second place in the Division with a game in hand.

The Vegas Golden Knights got a goal and two assists from Evgenii Dadonov to thump the Nashville Predators 6-1 to avoid falling further behind the Dallas Stars for the final Western wild-card spot. It was Dadonov’s first game since his trade to the Anaheim Ducks was overturned by the league. The Predators, meanwhile, are three points up on the Stars in the first wild-card spot.

SPECTOR’S NOTE: Golden Knights center Brett Howden was stretchered from the game following a hit by Predators winger Filip Forsberg. He was reportedly conscious, in stable condition with full movement of his limbs and sent to a hospital for further tests.

Earlier in the day, the Predators announced defenseman Mark Borowiecki is listed as week-to-week with an upper-body injury.

Leon Draisaitl scored twice and Connor McDavid added two assists to lead the Edmonton Oilers to a 5-2 win over the San Jose Sharks. McDavid sits atop the scoring race with 95 points, five ahead of Draisaitl. With 77 points, the Oilers are two points behind the second-place Los Angeles Kings in the Pacific Division. Sharks captain Logan Couture left the game with an upper-body injury.

The Kings, meanwhile, picked up a point in a 4-3 loss to the Chicago Blackhawks. Alex DeBrincat had a goal and an assist in regulation and potted the winning goal in the shootout while Colin Delia made 43 saves for the win. Phillip Danault scored twice for the Kings.

An overtime goal by Joel Eriksson Ek lifted the Minnesota Wild over the Vancouver Canucks 3-2. Kirill Kaprizov had a goal and an assist and Cam Talbot kicked out 26 shots as the Wild (80 points) sit one point ahead of the St. Louis Blues in second place in the Central Division. With 71 points, the Canucks are four points out of a wild-card spot in the Western Conference.

The Blues, while, fell 5-2 to the Philadelphia Flyers. Travis Konecny scored two goals and Martin Jones made 26 saves for the win. Earlier in the day, the Blues announced Tyler Bozak (lower-body) was moved to injured reserve.

A four-goal third period by the Ottawa Senators carried them to a 5-2 win over the Winnipeg Jets, leaving the latter five points out of the final Western wild-card spot. Brady Tkachuk scored twice and Tim Stutzle collected two assists for the Senators. Jets winger Kyle Connor netted his 40th goal of the season.

The New York Islanders picked up their fourth win in their last five games by downing the Detroit Red Wings 5-2. Brock Nelson scored twice and Anders Lee had three assists.

One proposed solution is to have 20 players iced by a team in a playoff game to count against the salary cap. Any attempted changes to the salary cap or to roster requirements, however, would constitute a material change of the collective bargaining agreement and would have to be negotiated with the NHL Players Association.

SPECTOR’S NOTE: Some would consider this the “Nikita Kucherov rule”, which arose because the Tampa Bay Lightning winger returned to action at the start of the 2021 playoffs after spending last season on LTIR recovering from offseason hip surgery. That allowed the Lightning the salary-cap flexibility to exceed the cap by the equivalent of Kucherov’s $9.5 million annual cap hit and add players before the trade deadline.

This loophole has existed since the implementation of the salary cap in 2005 and was used before, specifically by the Chicago Blackhawks in 2015 when Patrick Kane went on LTIR several weeks before the trade deadline with a broken collarbone. It’s taken this long, however, for some general managers to have an issue with it.

Bear in mind that medical substantiation must be provided to the league to justify placing a player on LTIR. The league looked into Kucherov’s status late last season and concluded the Lightning did nothing wrong.

Assuming the majority of general managers support this proposal, I don’t expect the PA to be onboard with it. This could be an issue that gets revisited during the next round of collective bargaining.

NBC SPORTS: The International Ice Hockey Federation has asked an independent ethics council board to investigate the Russian Hockey Federation and former IIHF president Rene Fasel regarding issues related to the war in Ukraine. Fasel was critical of the IIHF’s decisions to ban Russia and Belarus from upcoming international competitions. He’s serving as an advisor to Russia’s Kontinental Hockey League.

Washington Capitals forward Garnet Hathaway was fined $2,000.00 for diving/embellishment by the NHL department of player safety.