OTTAWA SUN: Senators owner Eugene Melnyk passed away late Monday following a long illness. His enduring legacy was buying the Senators in 2003 and maintaining the franchise in Ottawa. In 2015, Melnyk underwent a life-saving liver transplant. With his help, the Senators Community Foundation invested over $100 million in local charities and community programs.

SPECTOR’S NOTE: My condolences to Melnyk’s family and the Senators’ organization. The hockey world is mourning his passing, with NHL commissioner Gary Bettman and Senators captain Brady Tkachuk among the first to pay tribute. 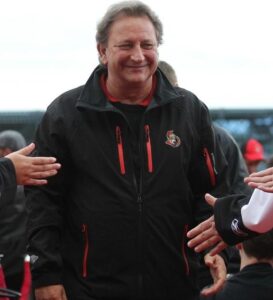 The Senators were among the NHL’s top teams during Melnyk’s early years of ownership, reaching the 2007 Stanley Cup Final. After exceeding expectations to reach the 2017 Eastern Conference Final, the club spent the following years rebuilding its roster.

Melnyk often faced criticism from Senators fans over the club’s direction, especially in recent years. He received his share of the blame for the departures of popular stars such as Daniel Alfredsson, Jason Spezza and Erik Karlsson. The outspoken Senators owner also threatened to move the club several years ago if the club’s attendance didn’t improve.

Nevertheless, the Senators would’ve probably relocated to an American city in 2003 if Melnyk hadn’t stepped in to purchase the franchise. It’ll be up to his successor and the club’s current management to ensure the current rebuilding program achieves his dream of turning the Senators into a Stanley Cup contender.

NHL.COM: The Carolina Hurricanes defeated the Washington Capitals 6-1 to take over first place in the Eastern Conference with 95 points, one ahead of the Florida Panthers. Martin Necas scored two goals and added an assist while Frederik Andersen made 25 saves for the win. The Capitals (84 points) remain three points behind the Boston Bruins, who hold the first Eastern wild-card spot.

SPECTOR’S NOTE: The Hurricanes weren’t happy over a hit on forward Jesperi Kotkaniemi by Capitals center Lars Eller late in the game. Kotkaniemi’s left leg appeared to be injured. Hurricanes coach Rod Brind’Amour didn’t know the extent of the injury following the game but commented it didn’t look good. No word if Eller will face supplemental discipline.

St. Louis Blues winger Vladimir Tarasenko reached his 500th career point in a 4-1 victory over the Vancouver Canucks. Tarasenko scored twice and chipped in an assist while Ville Husso turned in a 35-save performance. With 81 points, the Blues sit in third place in the Central Division. The Canucks (73 points) remain three points behind the Vegas Golden Knights for the final Western Conference wild-card berth.

The Edmonton Oilers bounced back from a 9-5 loss to the Calgary Flames on Saturday by thumping the Arizona Coyotes 6-1. Ryan McLeod tallied twice and picked up an assist, Leon Draisaitl had a goal and an assist and Mikko Koskinen got the win by kicking out 31 shots. The Oilers sit in third place in the Pacific Division, two points back of the second-place Los Angeles Kings.

Speaking of the Kings, they fell 6-1 to the Seattle Kraken. Chris Driedger stopped 36 Kings shots while teammate Vince Dunn collected two assists. It was the 1,000th career NHL game for Kings coach Todd McLellan, who became the seventh active coach to reach that milestone.

The Buffalo Sabres rallied from a 4-0 deficit to defeat the Chicago Blackhawks 6-5 with Tage Thompson netting the game-winner in the final seconds of the third period. Sabres winger Victor Olofsson scored twice and picked up an assist.

THE COLUMBUS DISPATCH: Blue Jackets defenseman Zach Werenski is listed as day-to-day with an upper-body injury suffered from a high hit by the Minnesota Wild’s Marcus Foligno during the Jackets’ 3-2 loss to the Wild on Saturday.

SAN JOSE HOCKEY NOW: San Jose Sharks captain Logan Couture suffered a bruised lung when he was struck by a shot by teammate Brent Burns during last Thursday’s game against the Edmonton Oilers. He missed Saturday’s game against the Anaheim Ducks but will return to the lineup on Wednesday to face the Arizona Coyotes.

COLORADO HOCKEY NOW: Over a week after being traded from the Montreal Canadiens to the Colorado Avalanche, Artturi Lehkonen’s immigration paperwork has been processed and he can finally join his new teammates.