NHL.COM/MONTREAL GAZETTE/THE ATHLETIC/TVA SPORTS: The hockey world was in mourning yesterday following the announcement that Montreal Canadiens icon Guy Lafleur had passed away at age 70 following a long battle with lung cancer. 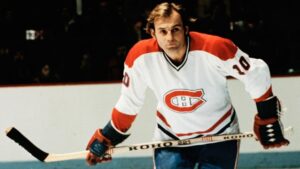 Lafleur was also remembered by Canadian prime minister Justin Trudeau, Quebec premier Francois Legault and NHL commissioner Gary Bettman. Teams, executives and coaches from around the league sent their condolences, including Colorado Avalanche general manager Joe Sakic and Calgary Flames head coach Darryl Sutter. Sakic was Lafleur’s teammate during the latter’s two seasons with the Quebec Nordiques while Sutter played against him in the early-1980s.

The Quebec Remparts, Lafleur’s former junior team, honored his memory prior to last night’s game against the Drummondville Voltigeurs.

SPECTOR’S NOTE: I wrote my tribute to Lafleur yesterday after seeing news of his passing. I noted his five Stanley Cups as well as his individual honors, statistical achievements, and what he meant to the Canadiens and their fans.

Put simply, he was the greatest player on hockey’s greatest team in the 1970s. A hero to Canadiens fans and admired by non-Habs supporters, Lafleur was worshipped in his home province of Quebec. He was a superstar whose electrifying style lifted fans from their seats and is fondly remembered to this day. He was also a Hall-of-Famer who always had time for his fans long after his retirement from the game. Rest in peace, Flower, you’ll never be forgotten.

NHL.COM: The Edmonton Oilers clinched a playoff berth with a 6-3 victory over the Colorado Avalanche. Evander Kane had a hat trick and chipped in an assist while Connor McDavid had three helpers and Mike Smith made 34 saves. Valeri Nichushkin scored twice for the Avalanche. The Oilers have won eight of their last 10 games and hold second place in the Pacific Division with 98 points. The Avalanche had lost three straight and remain in second place in the overall standings with 116 points.

SPECTOR’S NOTE: The Oilers have won 23 of their last 34 games since Jay Woodcroft took over as interim coach. The addition of Kane in late January is another contributing factor to their turnaround in the second half of the season. He had 20 goals and 36 points in 39 games with the Oilers. A potential concern, however, was the departure of defenseman Darnell Nurse in the second period of this game with a lower-body injury. He will be re-evaluated today.

Minnesota Wild winger Kirill Kaprizov became the first player in franchise history to reach 100 points in a season as he helped his club defeat the Seattle Kraken 6-3. Kaprizov scored a goal and picked up three assists while Joel Eriksson Ek tallied twice for Minnesota. The Wild hold a two-point lead over the St. Louis Blues for second place in the Central Division with 107 points. Kraken rookie Matty Beniers scored to extend his career-opening points streak to five games.

The Washington Capitals blanked the Arizona Coyotes 2-0. Vitek Vanecek made 19 saves for the shutout while Conor Sheary and John Carlson were the goal-scorers. The Capitals have won seven of their last nine games. They’re tied with the Boston Bruins with 99 points but the latter holds the first wild-card berth with a game in hand.

A shootout goal by Tim Stutzle gave the Ottawa Senators a 2-1 win over the Columbus Blue Jackets. Brady Tkachuk also scored for the Senators while Blue Jackets center Jack Roslovic notched his 20th of the season for the first time in his career.

TAMPA BAY TIMES: The Lightning will visit the White House on Monday as President Joe Biden honors the club for their 2020 and 2021 Stanley Cup championships.

VEGAS HOCKEY NOW: Golden Knights head coach Peter DeBoer dismissed a report by ESPN’s Emily Kaplan citing sources claiming goaltender Robin Lehner was about to undergo season-ending knee surgery. Lehner missed Friday’s practice as a maintenance day, according to DeBoer, who also said he expected the netminder at practice on Saturday and to be dressed for Sunday’s game against the San Jose Sharks.

SPECTOR’S NOTE: This is the second time this season that DeBoer has dismissed a report claiming Lehner could undergo season-ending surgery. The previous one occurred in February alleging he’d suffered a serious shoulder injury. Multiple reports claim he’s battling a nagging injury which would account for his inconsistent play this season. There’s been no confirmation of this by Lehner or the club.

TSN: Toronto Maple Leafs forwards Wayne Simmonds and Kyle Clifford were both fined by the NHL department of player safety for their actions against the Lightning during their 8-1 loss on Thursday. Simmonds was fined $2,250.00 for charging Lightning defenseman Mikhail Sergachev while Clifford was fined $2,500.00 for high-sticking Corey Perry.

SAN JOSE HOCKEY NOW: ESPN NHL analyst Kevin Weekes is considered a strong candidate for the Sharks’ general manager position. The club is conducting a search to replace Doug Wilson, who recently stepped down as GM for health reasons.

THE HOCKEY NEWS: Arizona Coyotes fans should expect to pay high prices to attend the club’s home games at the 5,000-seat arena at Arizona State University. The highest price per ticket for full season-ticket holders works out to $300.00 per game (before separate ticket fees) while half-season tickets work out to $445.00 per game. The cheapest seats for season-ticket holders is $89 per game while the cheapest half-season price is $110.

SPECTOR’S NOTE: That’s just the ticket prices. It doesn’t take into account the price for concessions, souvenirs and parking. It seems to me those tickets will be mostly sold to local businesses, shutting out the average fan and leading to a lot of empty seats in that small arena.

← Remembering Guy Lafleur NHL Rumor Mill - April 23, 2022 →
We use cookies on our website to give you the most relevant experience by remembering your preferences and repeat visits. By clicking “Accept”, you consent to the use of ALL the cookies.
Do not sell my personal information.
Cookie SettingsAccept
Manage consent