A look at the Blues’ potential offseason plans plus the latest speculation over Johnny Gaudreau’s future in today’s NHL rumor mill.

ESPN.COM: Kristen Shilton looked at what could be in store for the St. Louis Blues following their elimination from the playoffs by the Colorado Avalanche. 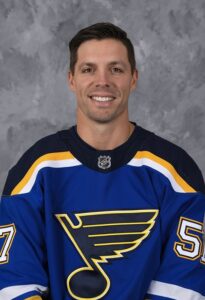 She anticipates they’ll re-sign Ville Husso before his eligibility for unrestricted free agent status on July 13. Despite the 27-year-old goaltender’s ordinary postseason performance, he’s a good complement in the crease with starter Jordan Binnington.

Vladimir Tarasenko had requested a trade last summer but that was overshadowed this season by the Blues’ improved performance. General manager Doug Armstrong will have to find the right return if the 30-year-old winger still wants out.

David Perron is also slated to become a UFA this summer. He had a terrific postseason but it remains to be determined where the 33-year-old winger fits into the Blues’ plans.

Armstrong must also shore up his defense corps. That includes new contracts for restricted free agents like Scott Perunovich and Niko Mikkola as well as adding some veterans who can play significant roles.

ST. LOUIS POST-DISPATCH: Ben Frederickson recently opined that the Blues must fight hard to keep Perron in the fold. He cites the winger’s value to the club during this postseason, especially during the first-round series against the Minnesota Wild. Frederickson also noted the Blues struggled without Perron during last year’s postseason series against the Avs when he was sidelined by COVID-19.

SPECTOR’S NOTE: Frederickson acknowledged Perron’s age and concussion history, but also believes the Blues can’t compete for the Stanley Cup next season without him. He makes a good point. Perron finished this postseason as the Blues’ leading scorer and is second among all scorers through two rounds with nine goals. He always steps up his game in the playoffs.

The problem, as always, is salary cap space. Cap Friendly shows the Blues with over $72 million invested in 17 players for 2022-23 with Perron, Husso, Perunovich and Mikkola as their notable free agents. Nick Leddy is also a UFA but I think he’ll be departing this summer. Ditto 36-year-old center Tyler Bozak.

Assuming Armstrong can re-sign those crucial free agents, he won’t have enough left to bring in some veteran help on the blueline. He’ll have to shed a salary or two. Shipping out Tarasenko if he still wants out will remove $7 million from the Blues’ cap payroll but it creates another problem of finding a suitable replacement.

Armstrong must also ensure he’ll have sufficient long-term cap space to sign rising stars like Jordan Kyrou and Robert Thomas to contract extensions next summer. The duo will be RFAs with arbitration rights next summer and in line for big raises over their identical $2.8 million cap hits of their current deals.

CALGARY SUN: Wes Gilbertson wonders what the future holds for Johnny Gaudreau following the Flames’ second-round elimination by the Edmonton Oilers. The 28-year-old winger is coming off a career-best 115-point performance and is slated to become a UFA on July 13. He’s completing a six-year contract with an annual average value of $6.75 million.

Gilbertson reminded us of GM Brad Treliving claiming he’d move heaven and earth to keep Gaudreau in Calgary. Without their first-line engine, they could take a significant step back from this season’s improvement.

If Gaudreau stays, he’ll be getting the richest contract in franchise history. Treliving has the advantage of being able to offer an eight-year deal whereas the winger would get seven years via free agency. Re-signing him, however, could complicate efforts to sign RFAs like Matthew Tkachuk, Andrew Mangiapane and Oliver Kylington.

PHILLY HOCKEY NOW: Sam Carchidi wondered if Gaudreau would sign with the Flyers if he tests the open market in July. He grew up in South Jersey and was a Flyers fan growing up. In 2016, Gaudreau observed that everyone wants to play for their hometown team eventually.

SPECTOR’S NOTE: I noted the Flames’ cap situation and that of the Flyers in my May 27 Rumor Mill. I don’t doubt Treliving will do what he can to keep Gaudreau in Calgary, but he’ll end up having to dump a salary or two to make room for the winger’s new contract and those of Tkachuk, Mangiapane and Kylington.

The Flyers, meanwhile, have much less cap room than the Flames. If they can’t free up between $9 million and $10 million to sign Gaudreau, the dream of Johnny Hockey rocking a Flyers jersey won’t have a chance of becoming a reality.

NYI HOCKEY NOW: Stefen Rosner mused about the possibility of the New York Islanders signing Gaudreau. With probably $8 million in cap space once they re-sign RFA Noah Dobson, they’ll have to shed salary if they hope to come up with enough to sign him. Cost-cutting candidates could include Josh Bailey, Semyon Varlamov or Anthony Beauvillier.

SPECTOR’S NOTE: Gaudreau could be a terrific fit alongside Islanders center Mathew Barzal. I think GM Lou Lamoriello will try to add a scoring forward this summer but could opt for a more affordable option, such as Nashville’s Filip Forsberg.

THE ATHLETIC: Hailey Salvian looked at some possible cost-cutting trade options for the Flames. Milan Lucic is a year away from UFA status but his eight-team trade list is a stumbling block. Mikael Backlund is 33 and has two more years left at $5.35 million annually with a 10-team no-trade list.

← NHL Morning Coffee Headlines - May 28, 2022 NHL Morning Coffee Headlines - May 29, 2022 →
We use cookies on our website to give you the most relevant experience by remembering your preferences and repeat visits. By clicking “Accept”, you consent to the use of ALL the cookies.
Do not sell my personal information.
Cookie SettingsAccept
Manage consent