The Flyers reportedly hire John Tortorella as head coach, the Predators are on the verge of being sold, the salary cap range for 2022-23 is set, and more in today’s NHL morning coffee headlines. 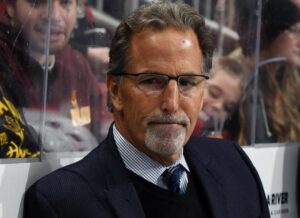 ESPN’s Kevin Weekes reports Tortorella’s new contract is expected to be in the range of four years at $4 million per season. That means the Flyers will be paying $9 million on coaches for next season as they still owe former coach Alain Vigneault $5 million for ’22-’23.

SPECTOR’S NOTE: Tortorella has a reputation as a demanding coach who preaches an aggressive defensive style. He also has a long history of success in almost every NHL city he’s coached in.

Tortorella guided the Tampa Bay Lightning to their first-ever Stanley Cup in 2003-04, winning his first Jack Adams Award this season. He coached the New York Rangers to the 2012 Eastern Conference Finals and the Columbus Blue Jackets to their first-ever playoff series win in 2019 by sweeping the Lighting in the opening round. Tortorella won his second Adams Award with the Blue Jackets in 2016-17.

The Flyers, however, will be a challenge for Tortorella. While his hiring fits into management’s goal of “aggressive retooling” of its roster, there are questions about their scoring punch and their blueline depth. Signing him a four-year deal suggests they’re willing to give him the time he needs to reverse the Flyers’ on-ice fortunes.

THE TENNESSEAN: The Nashville Predators are nearing an agreement to sell the franchise to former Tennessee governor Bill Haslam. He’s expected to become the majority owner for an unspecified period of time.

SPECTOR’S NOTE: It’ll be interesting to see what changes, if any, Haslam could have in store for the Predators. One thing is certain: he won’t be moving the club out of Nashville.

SPECTOR’S NOTE: League commissioner Gary Bettman announced earlier this week that the upper limit will continue to rise by $1 million increments for at least the next two seasons. If hockey-related revenue continues to improve over that period, the increases will become more robust by 2024-25.

DAILY FACEOFF: Frank Seravalli believes it’s likely the San Jose Sharks and Evander Kane will reach some sort of settlement regarding the latter’s grievance over his contract termination. NHL deputy commissioner Bill Daly suggested an arbitrator might not be available to hear the case until after the NHL free-agency period begins on July 13.

SPECTOR’S NOTE: Kane would still be allowed to sign with another NHL team if his case hasn’t been heard by July 13. However, the arbiter’s subsequent ruling could complicate things for both sides.

Seravalli suggests the arbiter could rule that the Sharks terminated Kane’s contract without cause. That would mean the winger would be reinstated with the Sharks and any contract he signed with another club would be voided. Kane would get the remainder of his original contract back but he’d have to return to the Sharks, which neither side wants at this stage.

THE DENVER POST: Valeri Nichushkin turned into the best bargain signing ever made by Colorado Avalanche general manager Joe Sakic. Inked to a one-year, $850K contract in 2019-20 after being bought out by the Dallas Stars, the two-way winger has gone on to become an invaluable member of the Avalanche’s march to the 2022 Stanley Cup Final.

SPECTOR’S NOTE: Nichushkin’s performance in 2019-20 earned him a two-year extension worth $2.5 million annually. This season has been a career year for the 27-year-old winger, tallying 25 goals and 52 points in 62 games during the regular season and six goals and 11 points in 15 postseason games thus far.

TAMPA BAY TIMES: The Lightning aren’t panicking over their overtime loss to the Avalanche in the opening game of the 2022 Stanley Cup Final. They’re 1-3 in Game 1 in this postseason and 11-3 in every other game.

SPECTOR’S NOTE: It’ll be important for the Lightning to win Game 2 on Saturday and return home for Games 3 and 4 with this series tied. While they overcame being down 2-0 against the New York Rangers in the Eastern Conference Finals, they could find it more difficult surmounting a similar deficit against the talented, swift-skatingAvalanche.

WINNIPEG SUN: Barry Trotz is set to meet again with the Jets for more discussions regarding the club’s vacant head coaching position.

SPECTOR’S NOTE: That doesn’t mean it’s a certainty Trotz will sign with the Jets but it is a promising step in that direction.

NEW YORK POST: The Rangers have signed Sammy Blais to a one-year, $1.525 million contract extension. The 26-year-old winger was slated to become a restricted free agent on July 13. He missed most of this season following a knee injury suffered in November.

Speaking of the Rangers, former Blueshirt Sean Avery was found guilty of using his scooter to hit a car that was blocking a bike lane in Manhattan in 2019. He was sentenced to time served.

← Canadiens Trade Shea Weber to Golden Knights NHL Rumor Mill - June 17, 2022 →
We use cookies on our website to give you the most relevant experience by remembering your preferences and repeat visits. By clicking “Accept”, you consent to the use of ALL the cookies.
Do not sell my personal information.
Cookie SettingsAccept
Manage consent