NHL.COM: The Eastern Conference Finals is now a best-of-three as the Tampa Bay Lightning downed the New York Rangers 4-1 to even the series at two games apiece. Ondrej Palat had a goal and two assists, Andrei Vasilevskiy made 34 saves and Nikita Kucherov, Steven Stamkos and Pat Maroon also scored for the Lightning. Artemi Panarin replied for the Rangers. The series returns to New York for Game 5 on Thursday. 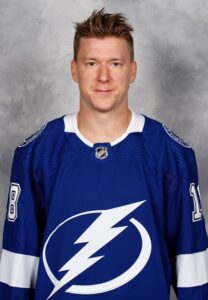 SPECTOR’S NOTE: This was a dominating performance by the Lightning, who have recovered their footing after dropping the first two games of this series. Their puck possession and defensive game have improved plus they’re doing a better job staying out of the penalty box.

The Rangers entered this game down one center with Ryan Strome still day-to-day with a lower-body injury. This lost another when Filip Chytil left the game in the second period with an upper-body injury following a hard hit from Lightning defenseman Victor Hedman. Rangers coach Gerard Gallant expects Chytil will be fine but is still awaiting further word on his condition.

New Jersey Devils defenseman P.K. Subban is this year’s winner of the King Clancy Trophy for his commitment to racial and social justice, underserved youth and COVID-19 relief. Subban is the first player in Devils history to win this award.

SPECTOR’S NOTE: Congratulations to Subban for his well-deserved and long-overdue recognition of his off-ice contributions to his community. He was also active in charity work during his time with the Montreal Canadiens and Nashville Predators.

THE COLUMBUS DISPATCH: The Blue Jackets signed Jack Roslovic to a two-year, $8 million contract. The 25-year-old center was slated to become a restricted free agent with arbitration rights on July 13.

SPECTOR’S NOTE: The annual average value of Roslovic’s contract is $4 million, leaving the Blue Jackets with $22.8 million in cap space with 17 players under contract for 2022-23. He got off to a slow start to this season but steadily improved to finish with a career-best 22 goals and 45 points. Roslovic will eligible for unrestricted free agent status following this deal.

THE DALLAS MORNING NEWS: The Stars inked Denis Gurianov to a one-year, $2.9 million contract. The 25-year-old winger will be a restricted free agent with arbitration rights next summer.

SPECTOR’S NOTE: The Stars have $14.6 million in cap space with 17 players under contract next season.

COLORADO HOCKEY NOW: Andrew Cogliano could miss the 2022 Stanley Cup Final. Avalanche head coach Jared Bednar said the veteran forward is “out for now” with an injury similar to Nazem Kadri, who suffered a broken thumb in Game 3 of the Western Conference Finals. Bednar said the club isn’t really sure on the timeline of return for both players.

THE SEATTLE TIMES: Kraken goaltender Chris Driedger underwent successful surgery on Monday to repair a torn MCL suffered while playing for Canada in the 2022 IIHF World Championships. His estimated timeline of recovery is seven-to-nine months.

MONTREAL GAZETTE: The Canadiens hired Marie-Phillip Poulin as a player development consultant. It will be a part-time position over the next four years for the three-time Women’s Olympic gold medalist as she continues her playing career with the goal of pursuing her fourth Olympic gold at the 2026 Turin Games.

← NHL Rumor Mill - June 7, 2022 NHL Rumor Mill - June 8, 2022 →
We use cookies on our website to give you the most relevant experience by remembering your preferences and repeat visits. By clicking “Accept”, you consent to the use of ALL the cookies.
Do not sell my personal information.
Cookie SettingsAccept
Manage consent