The Blackhawks could test this summer’s trade market, what a Kevin Fiala-to-Islanders trade might look like, and some Canadiens’ speculation in the Sunday NHL rumor roundup.

BLACKHAWKS TO TEST THE TRADE MARKET

SPORTSNET: Elliotte Friedman reports the Chicago Blackhawks could be a team to watch over the next few weeks in the trade market.

Patrick Kane, Jonathan Toews and Seth Jones are off the table given their no-move clauses. However, management is testing the market for anyone on their roster that other teams are willing to ask about.

Friedman said another general manager compared this to when they moved Brandon Hagel before the trade deadline. “Can you make them an offer that makes them want to seriously think about it?” 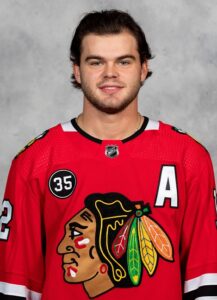 SPECTOR’S NOTE: That report could make Blackhawks fans nervous about Alex DeBrincat’s future in Chicago. He’s a year away from becoming a restricted free agent with arbitration rights, carries a $6.4 million cap hit and lacks no-trade protection. The 24-year-old winger also set a career-high in points this season with 78 and matched his career-high of 41 goals.

Of everyone on the Blackhawks roster who could be available, DeBrincat is the guy who’ll garner the most interest and fetch the best return. However, the rebuilding Hawks won’t just give him away. The asking price will consist of at least a first-round pick and either a top prospect or a good young (and affordable) NHL player.

Any club acquiring him should ensure they have the cap space to sign him to a big raise after this season. Another 40-goal performance will push his value up into the $9 million per season range.

THE ATHLETIC: Kevin Kurz recently mused over what it might cost the New York Islanders to make a pitch for Kevin Fiala. The Minnesota Wild winger is a restricted free agent with arbitration rights coming off a one-year, $5.1 million contract. The Wild could have difficulty signing him because of their limited salary-cap space for next season.

Kurz believes any potential trade for Fiala would have to start with the Isles’ first-round pick in either this year’s draft or next year’s. He also believes they’d have to throw in a young player or prospect. He rules out Anthony Beauvillier because of his $4.15 million cap hit but suggested Oliver Wahlstrom as an alternative. If the Islanders don’t want to part with their first-round pick, perhaps a prospect such as Aatu Raty might push the deal over the finish line.

SPECTOR’S NOTE: Bear in mind that Kurz is merely speculating here. There’s no indication the Islanders are interested in Fiala, especially with the secretive Lou Lamoriello as their general manager. Nevertheless, this provides at least some idea of what it might take to acquire him. The Wild can’t afford to take back much salary in a Fiala deal.

Armia was said to be a popular name in the market leading up to the March trade deadline. He has three years remaining on his contract with a $3.4 million cap hit, which could mean the Canadiens take back a smaller contract in order to get a draft pick in return.

SPECTOR’S NOTE: Canadiens general manager Kent Hughes made no secret of his intention to free up some salary-cap space this summer by shopping a veteran or two. Armia could be among his cost-cutting trade candidates.

Murphy also wondered if Ethan Bear might be a fit with the Canadiens. The 24-year-old Carolina Hurricanes defenseman is a restricted free agent with arbitration rights this summer.

Bear saw action in 58 regular-season games with the Hurricanes but was a healthy scratch in the playoffs. Sportsnet’s Elliotte Friedman speculated the blueliner might not want to return, though a lot depends on what happens with fellow RFA Tony DeAngelo and pending UFA Ian Cole this summer.

SPECTOR’S NOTE: I wouldn’t rule out an interest in Bear if he’s available by the Canadiens. He could be among several affordable young options Hughes could be seeking this summer for his blueline. Murphy’s source cited Bear’s conditioning as an issue, which could hurt his trade value.

← NHL Morning Coffee Headlines - June 5, 2022 NHL Morning Coffee Headlines - June 6, 2022 →
We use cookies on our website to give you the most relevant experience by remembering your preferences and repeat visits. By clicking “Accept”, you consent to the use of ALL the cookies.
Do not sell my personal information.
Cookie SettingsAccept
Manage consent