A look at some more possible trade candidates if the Islanders sign Nazem Kadri plus some recent speculation on the Leafs’ Alex Kerfoot in today’s NHL rumor mill.

NEW YORK POST: Larry Brooks acknowledged recent rumors linking Nazem Kadri to the New York Islanders. While he believes the free-agent center would make them a better club, he pointed out he’ll soon turn 32, is seeking a long-term contract, and plays at a position where the Isles are pretty much set with Mathew Barzal and Brock Nelson. 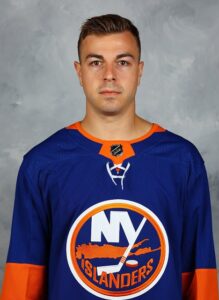 Given the Islanders’ limited salary-cap space, Brooks believes they’ll have to make a cost-cutting trade to accommodate Kadri’s contract. He believes center Jean-Gabriel Pageau would make the most sense on paper given his $5 million annual salary-cap hit.

However, Isles general manager Lou Lamoriello gave up a lot to acquire and sign Pageau, who plays a reliable two-way game. The Isles would have to move out a player for pennies on the dollar if the rest of the league believes Lamoriello is in a bind to clear cap space.

Brooks also suggested Josh Bailey or Anthony Beauvillier if the Isles don’t shop Pageau. With Bailey just seven games away from his 1,000th career contest, it’s hard to know whether that’ll factor into any deal. Beauvillier is seven years younger than Kadri and moving him means sacrificing youth from the roster. Dealing either one would also mean sacrificing depth on the wing.

NYI HOCKEY NOW: Stefen Rosner reports some Islanders fans were worried about Oliver Wahlstrom being a trade candidate after he made a minor change to his Instagram bio. However, sources tell him the 22-year-old winger isn’t a player the Islanders want to move.

SPECTOR’S NOTE: Lamoriello or Kadri could bring this situation to an end by simply issuing a statement denying the speculation. Their silence stokes rumors that they’ve already got an agreement in place and will officially announce it once the Isles clear sufficient salary-cap space.

This isn’t the first time Lamoriello’s done this sort of thing. He held off announcing the signings of Zach Parise, Kyle Palmieri, Ilya Sorokin, Casey Cizikas and Anthony Beauvillier until days before training camp opened last September. Parise and Palmieri were both unrestricted free agents at the time but they also kept quiet.

I daresay there would be lots of interest in Wahlstrom. Trading him, however, wouldn’t resolve the Islanders’ need to clear salary-cap space for Kadri unless they’re peddling more than one player to do so. Even then, it wouldn’t make much sense to give up on a promising winger after just two seasons just to dump some salary. My guess is Bailey or Beauvillier get shopped.

THE ATHLETIC: James Mirtle recently wondered if the Toronto Maple Leafs addition of free agent Calle Jarnkrok might make Alex Kerfoot expendable. Jarnkrok signed a four-year contract with an average annual value of $2.1 million. Kerfoot, meanwhile, earns $3.5 million this season and is slated to become a UFA next summer.

Mirtle feels Jarnkrok would be a downgrade from Kerfoot. He’s three years older and his stats suffered following stints last season with the Seattle Kraken and Calgary Flames. Kerfoot may be the better player but he could have value in the trade market.

The Leafs could prefer moving defenseman Justin Holl instead. However, they might not want to do that until they’ve got more clarity on Rasmus Sandin’s contract situation.

SPECTOR’S NOTE: As Mirtle points out, something’s got to give for the Leafs given their salary cap limitations. Jarnkrok’s addition could make Kerfoot the odd man out. Then again, it could be Holl once they get Sandin signed.

← NHL Morning Coffee Headlines - August 3, 2022 NHL Morning Coffee Headlines - August 4, 2022 →
We use cookies on our website to give you the most relevant experience by remembering your preferences and repeat visits. By clicking “Accept”, you consent to the use of ALL the cookies.
Do not sell my personal information.
Cookie SettingsAccept
Manage consent