MacKenzie Weegar could start contract talks soon with the Flames plus updates on the Penguins and Sharks in today’s NHL rumor roundup.

LATEST ON WEEGAR AND THE FLAMES

TSN’s Salim Valji took to Twitter to report a source said MacKenzie Weegar has a “strong, genuine desire” to re-sign with the Calgary Flames. He believes the two sides could start contract talks next week. 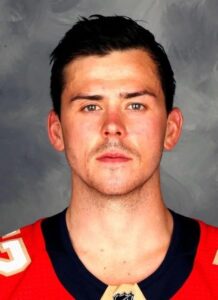 SPECTOR’S NOTE: The Flames acquired Weegar last month as part of the return from the Florida Panthers in the Matthew Tkachuk trade. He and Jonathan Huberdeau both indicated a willingness to discuss contract extensions with their new club.

With Huberdeau now signed to an eight-year extension, the focus shifts to the 28-year-old defenseman. He’s slated to become an unrestricted free agent next summer.

After signing his new contract, Huberdeau told the media that he wanted to sign with the team that wanted him. Weegar could feel the same way. Following the trade, there was a report out of Florida indicating both players weren’t pleased with their contract discussions with the Panthers.

UPDATE ON THE PENGUINS AND SHARKS

THE ATHLETIC: In a recent mailbag segment, Rob Rossi was asked if the Pittsburgh Penguins could afford to trade one of their left-side defensemen. He doesn’t believe they can.

Rossi felt the Penguins need left-side blueliners such as Brian Dumoulin and Marcus Pettersson to perform at as close to peak level as possible if they hope to contend for the Stanley Cup.

SPECTOR’S NOTE: The Penguins are sitting nearly $1.5 million above the $82.5 million cap for the coming season. There was speculation they might shop Dumoulin or Pettersson to free up cap space and clear a path for a more affordable young rearguard such as Pierre-Olivier Joseph or the recently-acquired Ty Smith.

However, they’re also sitting one player over their 23-man roster limit and could clear some of that cap space by placing a player or two on waivers. And to those readers advocating a trade of Jason Zucker, no, they’re not going that route. There’s not much of a market for an oft-injured 30-year-old winger with a $5.5 million cap hit and a 10-team no-trade clause.

THE ATHLETIC: In an Aug. 1 mailbag segment, Corey Masisak was asked how the San Jose Sharks intend to address their glut of goaltenders. They currently have seven under NHL contracts, including James Reimer, Kaapo Kahkonen and Adin Hill.

Masisak suggested one of them could be traded during training camp or preseason if another team has a goalie sidelined. They could also put Hill on waivers and if he clears keep him in the minors until Reimer or Kahkonen gets hurt.

← NHL Morning Coffee Headlines - August 6, 2022 NHL Morning Coffee Headlines - August 7, 2022 →
We use cookies on our website to give you the most relevant experience by remembering your preferences and repeat visits. By clicking “Accept”, you consent to the use of ALL the cookies.
Do not sell my personal information.
Cookie SettingsAccept
Manage consent