Could the Flames attempt to trade Milan Lucic? Would there be room on the Bruins for his return? What’s the latest on P.K. Subban, Phil Kessel and Josh Bailey? Find out in the Sunday NHL Rumor Roundup

COULD THE FLAMES MAKE ANOTHER BIG MOVE? 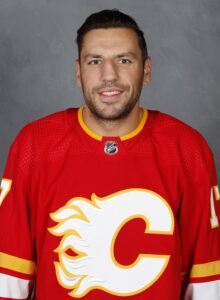 The Flames made headlines last month with a blockbuster trade by shipping Matthew Tkachuk to the Florida Panthers for Jonathan Huberdeau and MacKenzie Weegar. Macfarlane wondered if they might make another impact trade or free-agent signing.

BOSTON HOCKEY NOW: Jimmy Murphy half-jokingly made the suggestion that Bruins general manager Don Sweeney should attempt to bring back Lucic after signing Bergeron and Krejci. He pointed to Lucic’s close friendship with those two as well as Bruins wingers Brad Marchand and David Pastrnak.

Murphy wondered if Sweeney would be interested in acquiring Lucic if the Flames agreed to retain part of his $6 million cap hit. He’s slated to become an unrestricted free agent next summer.

SPECTOR’S NOTE: If the Bruins want a reunion with Lucic (and there’s no indication Sweeney is considering that) they’ll have to wait for next summer. Macfarlane pointed out he remains a key part of the Flames’ leadership core for the coming season as they hope to contend for the Stanley Cup.

Flames GM Brad Treliving could surprise us with another big off-season move. However, I think he’s already made his big splash for this summer.

SUBBAN AND KESSEL TO THE OILERS?

Staples also noted Oilers Now insider Bob Stauffer said the club could be a choice destination for some aging free agent players. Kessel has been frequently linked to the Oilers this summer in the rumor mill.

SPECTOR’S NOTE: I’m no oddsmaker but I’d say Kessel has a better chance of joining the Oilers than Subban. They could use more offensive depth on right wing and he put up a respectable 52 points last season on the offensively anemic Arizona Coyotes. However, we don’t know if the Oilers are interested in him.

THE ATHLETIC: Kevin Kurz poured cold water on speculation suggesting the New York Islanders could move Josh Bailey to clear cap room to sign Nazem Kadri. He believes if that deal was going to happen it would’ve by now, pointing out most rosters around the league are now set. There are few teams that can afford the 32-year-old winger’s $5 million annual cap hit through 2023-24.

Kurz acknowledged the Isles could retain $1.5 million to $2 million of Bailey’s salary-cap hit to facilitate a trade. However, it wouldn’t make much sense for them to do that.

SPECTOR’S NOTE: If Bailey was in the final season of his contract it might make more sense to retain part of his cap hit. Doing so for two years, however, leaves dead cap space carrying over into 2023-23. Retaining part of his salary could still hamper efforts to sign Kadri, depending on how much they spend to re-sign restricted free agents Noah Dobson, Alexander Romanov and Kieffer Bellows.

Bailey lacks no-trade protection so he could be shopped to rebuilding teams with cap room such as the Arizona Coyotes or Chicago Blackhawks. However, the Isles will be expected to include a decent draft pick or prospect in the deal. There is also the question of whether those clubs want or need a veteran winger at this stage in their rebuilding process.

← NHL Morning Coffee Headlines - August 14, 2022 NHL Morning Coffee Headlines - August 15, 2022 →
We use cookies on our website to give you the most relevant experience by remembering your preferences and repeat visits. By clicking “Accept”, you consent to the use of ALL the cookies.
Do not sell my personal information.
Cookie SettingsAccept
Manage consent