Recaps of Wednesday’s games, the Leafs place Morgan Rielly on LTIR and the Stars’ Jason Robertson is on pace to match a franchise points record. Details and more in today’s NHL Morning Coffee Headlines.

NHL.COM: The Buffalo Sabres snapped an eight-game losing skid by thumping the Montreal Canadiens 7-2. They jumped out to an early 3-0 lead within the first 2:13 and finished the night with Jeff Skinner scoring twice and adding three assists, Tage Thompson enjoying a four-point performance while Rasmus Dahlin and Alex Tuch each collected three points. Cole Caufield and Sean Monahan replied for the Canadiens (9-9-1) while the Sabres improve to 8-11-0. 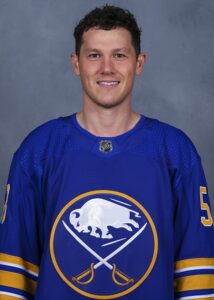 New York Rangers winger Chris Kreider tallied two third-period goals to lead his club to a 5-3 victory over the Los Angeles Kings. Rangers goaltender Igor Shesterkin picked up the win with a 35-save performance to boost his club’s record to 10-6-4. Kevin Fiala had a goal and two assists for the 11-9-2 Kings.

TORONTO SUN: The Maple Leafs placed defenseman Morgan Rielly on long-term injured reserve after he suffered a knee injury against the New York Islanders on Monday. He’ll be sidelined for at least 10 games and 24 days.

THE DALLAS MORNING NEWS: Jason Robertson can tie a Stars franchise record for the longest points streak (13) held by Dave Gagner when his club faces off on Wednesday against the Chicago Blackhawks. Robertson, 23, currently sits third among NHL scorers with 14 goals and 29 points.

SPECTOR’S NOTE: Robertson and Dallas goalie Jake Oettinger are two of the brightest young stars in the league right now. The Stars are currently second overall in the Western Conference in part because of those youngsters but they aren’t getting the recognition they deserve. Hopefully, that changes as the season rolls on.

CHICAGO SUN-TIMES: Good news for the Blackhawks as defenseman Seth Jones is returning to the lineup after being sidelined for 10 games with a broken thumb.

PHILLY HOCKEY NOW: The Flyers provided an update on sidelined forwards Scott Laughton, Travis Konecny and Wade Allison. Laughton will miss approximately two weeks with a suspected head injury, Konecny is out 10-14 days with an injured right hand while Allison is out for two-to-three weeks with a hip pointer/strained oblique muscle.

SPECTOR’S NOTE: It’s no wonder the Flyers have struggled in recent weeks.

SAN JOSE HOCKEY NOW: The Sharks have called up Aaron Dell as starting goaltender James Reimer is out with a lower-body injury. Forward Nico Sturm is also sidelined as he has an upper-body injury.