The Devils’ Lindy Ruff reaches a coaching milestone, the Leafs’ Mitch Marner and the Stars’ Jason Robertson maintain their points streaks, and much more in today’s NHL Morning Coffee Headlines.

NHL.COM: New Jersey Devils head coach Lindy Ruff picked up his 800th career NHL win as his club defeated the Washington Capitals 5-1. Jack Hughes tallied his first career hat trick and Vitek Vanecek made 37 saves as the Devils (18-4-3) move into a tie for first place in the overall standings with the Boston Bruins. John Carlson replied for the Capitals as they fall to 9-11-3. 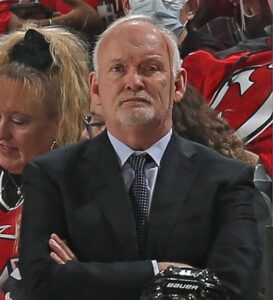 SPECTOR’S NOTE: Ruff is the fifth NHL coach to reach the 800-win milestone. He’s also the leader in wins among active coaches. As for the overall standings, the Bruins hold a game in hand over the Devils. It will be interesting to see if these two clubs can maintain their strong performance through the first quarter over the remainder of the schedule.

A 41-save performance by Alexandar Georgiev carried the Colorado Avalanche over the Dallas Stars by a score of 4-1. Josh Manson had a goal and an assist for the Avalanche (12-6-1). Dallas winger Jason Robertson collected an assist on Joe Pavelski’s goal to extend his points streak to 15 games but his Stars fall to 12-6-4.

SPECTOR’S NOTE: Earlier in the day, the Avalanche announced winger Evan Rodrigues will be sidelined for two-to-four weeks with a lower-body injury.

Vancouver Canucks winger Brock Boeser stretched his points streak to nine games with a goal in a 5-1 upset of the Vegas Golden Knights. J.T. Miller had a goal and two assists while Spencer Martin stopped 26 shots as the Canucks improved to 8-10-3. Jonathan Marchessault replied for the 16-6-1 Golden Knights, who hold a five-point lead over the Stars for first place in the Western Conference with 33 points.

Speaking of comebacks, the St. Louis Blues also scored four unanswered goals in a 5-4 win over the Florida Panthers. Jordan Kyrou tallied twice, including the winner in overtime, as the Blues improved to 11-10-0. Sam Reinhart had two assists for the Panthers (10-8-3), who were playing without captain Aleksander Barkov as he was sidelined by a non-COVID-related illness.

A third-period goal by Brett Pesce lifted the Carolina Hurricanes (11-6-5) to a 3-2 win over the Calgary Flames, ending their winless skid at five games. Dan Vladar made 30 saves for the 9-9-3 Flames but they’ve dropped three straight games. Flames defenseman Michael Stone returned to the lineup after missing 10 games with a non-disclosed injury.

WINNIPEG SUN: Jets goaltender Connor Hellebuyck wants a rule change for an immediate stoppage of play when a netminder’s mask is knocked off or comes off during play. Hellebuyck lost his mask during a collision in Friday’s game against the Dallas Stars and was lying prone and shaken up on the ice with no stoppage of play, enabling the Star to score an empty-net goal.

SPECTOR’S NOTE: The NHL situation rule allowed the Stars’ goal to stand. Hellebuyck was able to resume playing but he and teammate (and NHLPA representative) Adam Lowry would like clarity on this issue. Sportsnet’s Elliotte Friedman and Jeff Marek suggest this could lead to a new directive from the league.

SAN JOSE HOCKEY NOW: Sharks defenseman Mario Ferraro was placed on injured reserve retroactive to Friday’s 5-2 loss to the Los Angeles Kings. No word as to the seriousness of his undisclosed injury but he will be sidelined for at least a week.

THE ATHLETIC’S Michael Russo tweeted the Wild have recalled goaltender Zane McIntyre as a precautionary measure after one of their goalies had an issue at practice on Saturday.

← NHL Rumor Mill - November 26, 2022 Sunday NHL Rumor Roundup - November 27, 2022 →
We use cookies on our website to give you the most relevant experience by remembering your preferences and repeat visits. By clicking “Accept”, you consent to the use of ALL the cookies.
Do not sell my personal information.
Cookie SettingsAccept
Manage consent