THE LATEST ON TIMO MEIER

SAN JOSE HOCKEY NOW: Sheng Peng reports Sharks winger Timo Meier said there’s nothing new going on regarding his contract extension negotiations. That’s in line with what his agent, Claude Lemieux, said at the start of the season. Lemieux had indicated he didn’t anticipate receiving any offers until the end of this season. 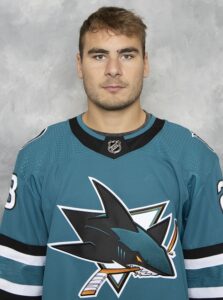 The Sharks could decide to trade the 26-year-old Meier, who is slated to become a restricted free agent in July. “It’s in your head sometimes,” Meier admitted, but he said he’s trying not to get too caught up in it.

Peng recently observed that Daily Faceoff’s Frank Seravalli has Meier at No. 6 on his early-season list of NHL trade targets. He currently has a management annual salary-cap hit of $6 million.

THE ATHLETIC: In a recent mailbag segment, Kevin Kurz was asked if he thought the New York Islanders should pursue Meier or Vancouver Canucks center Bo Horvat if they become available at the March 3 trade deadline.

Kurz believed Meier would be a better fit as he would be a natural to line up alongside first-line center Mathew Barzal. However, he doubted the Isles have the assets to make that deal as bidding for Meier would be fierce. He speculated it could cost them a first-round pick and one of their few high-end prospects, provided Meier would sign a contract extension with them.

SPECTOR’S NOTE: Hanging over Meier’s contract situation is the cost of the qualifying offer. As I and other observers have noted, while his annual cap hit is $6 million, he’s being paid $10 million this season in actual salary.

Because Meier signed his current contract before changes to qualifying offer rules were made in 2020, it will cost the Sharks (or whatever team were to acquire him) $10 million just to qualify his rights unless he and the team can agree before then on a new contract with perhaps a lower average annual value.

If Meier does hit the trade block before March 3, teams could consider him to be a rental player instead of one they can retain beyond this season.

SPECTOR’S NOTE: The Jackets reportedly expressed interest in Chychrun leading up to the opening round of this year’s draft but he supposedly spiked the deal despite lacking no-trade protection. Jackets management denied the story but more than a few pundits claim their interest was genuine.

The Jackets are well-stocked with promising players on their roster (Kent Johnson, Cole Sillinger, Adam Boqvist, Yegor Chinakhov) and in their prospect pipeline (David Jiricek, Denton Mateychuk) that could entice the Coyotes. That’s assuming Chychrun has had a change of heart regarding his rumored unwillingness to go to Columbus.

SPORTSNET: Elliotte Friedman doesn’t expect the Florida Panthers will attempt to move veteran winger Patric Hornqvist to make room for Anthony Duclair when the latter is ready to return to the lineup.

Hornqvist is in the final season of his contract with a cap hit of $5.3 million. There’s a belief that Florida GM Bill Zito promised the winger that he wouldn’t be traded elsewhere in order to get him to agree to accept a trade to the Panthers. Friedman doubted that Zito would renege on his promise.

SPECTOR’S NOTE: If Zito wanted to trade Hornqvist he probably won’t find much of a market for an aging, expensive winger playing fourth-line minutes. Besides, Hornqvist still has an eight-team no-trade list.

Zito’s not in a position of strength here and rival clubs could be more interested in players still in their prime like Duclair, Sam Reinhart or Sam Bennett. It’ll be interesting to see how the Panthers GM handles this situation.

← NHL Morning Coffee Headlines - November 26, 2022 NHL Morning Coffee Headlines - November 27, 2022 →
We use cookies on our website to give you the most relevant experience by remembering your preferences and repeat visits. By clicking “Accept”, you consent to the use of ALL the cookies.
Do not sell my personal information.
Cookie SettingsAccept
Manage consent