Will the Oilers shop for a replacement for the sidelined Evander Kane? Will the Senators make a move soon to improve their defense? Should the Penguins part ways with Kasperi Kapanen? Check out the latest speculation in today’s NHL Rumor Mill.

HOW WILL THE OILERS REPLACE EVANDER KANE?

TSN: Pierre LeBrun reports not to expect the Edmonton Oilers to seek out a replacement for sidelined winger Evander Kane in the trade market. That type of player isn’t available plus the Oilers might ensure they 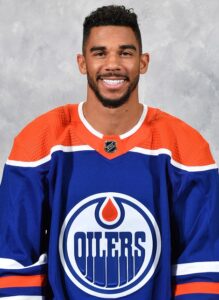 have sufficient cap space for when Kane returns from long-term injured reserve in February or March.

THE ATHLETIC: Daniel Nugent-Hopkins shares LeBrun’s view. He noted that Oilers general manager Ken Holland has made a few calls around the league but doesn’t believe there’s a trade to be had. Instead, Holland will look within his organization by drawing upon wingers such as Mattias Janmark, Klim Kostin, Tyler Benson or rookie Dylan Holloway.

SPECTOR’S NOTE: I noted the Oilers’ cap space dilemma in yesterday’s rumor mill. They’ll simply have to adjust and try to make do as best they can until Kane can return to the lineup.

WILL THE SENATORS PURSUE A DEAL FOR CHYCHRUN?

THE HOCKEY NEWS: Adam Proteau believes the struggling Ottawa Senators must make a move soon to improve their defense corps. He noted they’ve been linked to Jakob Chychrun but the Arizona Coyotes have set a high asking price for the 24-year-old blueliner. Some observers believed rookie center Shane Pinto is part of that asking price.

Proteau acknowledges that would be a high price to pay but felt it was worthwhile given the Senators are a top-heavy club lacking blueline depth. While Chychrun can’t be seen as their savior, he would provide an instant boost to their defense corps. He thinks the Senators risk another lost season if they don’t reverse their fortunes over the next couple of weeks.

SPECTOR’S NOTE: I concur with Proteau’s take that the Senators’ thin defense corps could jeopardize their playoff hopes. Chychrun’s puck-moving skills could indeed give their blueline a much-need boost.

However, Chychrun missed a lot of time in his NHL career with injuries to his knees, shoulder and head. He is currently recovering from off-season wrist surgery.

If Chychrun were healthy and playing well this season then perhaps Senators management would be willing to meet the Coyotes’ high asking price. However, the fact is that Chychrun is damaged goods and no GM worth their salt wants to invest heavily in such a player when he hasn’t skated in a single game this season.

The Senators have the assets to swing a major deal for a defenseman. However, they’re going to have to look elsewhere for a suitable solution to their blueline woes.

WILL THE PENGUINS PART WAYS WITH KAPANEN?

PITTSBURGH HOCKEY NOW: Dave Molinari believes it’s time for the Penguins to wave – or waive – goodbye to Kaspari Kapanen. They gambled on the 26-year-old winger by re-signing him to a two-year contract but he’s done little to justify it.

Kapanen put up five points in his first five games but went pointless through the Penguins’ seven-game losing skid. He was a healthy scratch during their win on Wednesday over the Washington Capitals.

Molinari doubts the Penguins will find any takers for Kapanen in the trade market. They could put him on waivers and send him to their AHL affiliate. That could come with the risk that he gets claimed by another NHL team and goes on to rediscover his scoring touch. However, his departure would open up $3.2 million in cap space for this season and next.

SPECTOR’S NOTE: It’s just not working for Kapanen and the Penguins. Now in his third season in Pittsburgh, he hasn’t come close to matching the potential of his 20-goal, 44-point performance with the Toronto Maple Leafs in 2018-19. Maybe he never will.

Regardless, it’s worth the risk for the Penguins to waive him. If someone claims him, at least it clears a sizeable chunk of cap room. If not, they can send him to the minors where maybe he gets his act together. If not, burying him there will free up $1.125 million for this season. They can buy out his final season next summer if they can’t find a taker in the trade market.

← NHL Morning Coffee Headlines - November 11, 2022 NHL Morning Coffee Headlines - November 12, 2022 →
We use cookies on our website to give you the most relevant experience by remembering your preferences and repeat visits. By clicking “Accept”, you consent to the use of ALL the cookies.
Do not sell my personal information.
Cookie SettingsAccept
Manage consent