Check out the latest on the Canucks plus recent rumors on Ryan O’Reilly, James van Riemsdyk and more in the Sunday NHL Rumor Roundup.

SPORTSNET: Elliotte Friedman reports the Vancouver Canucks don’t want to tear down and rebuild their roster but they’re interested in changing their mix and breathing new life into the team.

The Canucks have indicated center Elias Pettersson is their only untouchable. They’re not looking to trade defenseman Quinn Hughes and it would take “a mammoth offer” to pry him away. 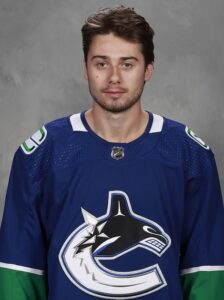 As for Bo Horvat, Friedman believes they don’t want to go over the $56 million they signed J.T. Miller to back in September on an eight-year deal. However, Horvat’s performance this season puts him over that.

SPECTOR’S NOTE: Hughes is all but untouchable. I don’t see them moving him given he’s their best defenseman and it would be very difficult to find a comparable replacement. Unless he wants out, they’re not trading him.

Horvat, meanwhile, is on pace to reach 50 goals this season. If the Canucks aren’t willing to pay him more than the $8 million per season that Miller will start earning in 2023-24, expect him to be suiting up with a new club by no later than March 3.

THE ATHLETIC: Pierre LeBrun reports the Canucks would seek a hockey deal rather than a futures-only return if they were to move Horvat before the March 3 trade deadline. They want to upgrade at center and/or their right-shot defense if possible and bring in a player in his twenties.

LeBrun wondered if non-playoff teams with cap space might try to acquire Horvat before the deadline. He considers it a long shot but one of those clubs might consider it worthwhile to acquire him in order to negotiate a new contract with him before his unrestricted free-agent eligibility on July 1.

SPECTOR’S NOTE: It’s been frequently reported that Canucks owner Francesco Aquilini doesn’t want to rebuild the roster. Management has no other option but to try and retool around the current core. That means shopping players like Horvat and Brock Boeser for comparable roster players (or as close to it as possible) in return.

VEGAS HOCKEY NOW: Owen Krepps doesn’t count out the Golden Knights as a potential suitor for Horvat. He acknowledged the Golden Knights’ lack of salary-cap space and that they play in the same division as the Canucks are two factors that work against it.

SPECTOR’S NOTE: Let’s just say that Horvat ending up with the Golden Knights this season is a long shot and leave it at that.

THE ATHLETIC: Eric Duhatschek wondered if St. Louis Blues center Ryan O’Reilly might return to the Colorado Avalanche before the March 3 trade deadline. O’Reilly returning to the team where he started his NHL career would be a juicy storyline but a lot would have to happen to make it take place.

SPECTOR’S NOTE: The Avalanche’s limited cap space plus the recent rivalry between the Avs and Blues probably works against this. Still, never say never, I suppose.

Columbus Blue Jackets forward Gustav Nyquist could be worth monitoring. He’s been playing five-on-five minutes with Johnny Gaudreau and has a modest 13 points.

SPECTOR’S NOTE: Nyquist also had a 53-point performance last season with the Jackets before Gaudreau arrived. Duhatschek points out he’s got a $5.5 million cap hit this season. However, I think the Jackets could retain part of that for the right return.

SPORTSNET: Jeff Marek reports the Philadelphia Flyers have made winger James van Riemsdyk available. He’s in the final season of his contract with a $7 million salary-cap hit but he’s earning $5 million in actual salary, of which $1 million was already paid as a bonus. Marek believes the Flyers could be willing to retain part of his salary to make the 33-year-old winger more palatable in the trade market.

SPECTOR’S NOTE: Marek pointed out that van Riemsdyk has playoff experience and could be enticing to playoff contenders seeking help on the power play. He’s reached 20-plus goals seven times and 40 or more points eight times in his previous 13 seasons. He was sidelined by a fractured finger earlier in the season but has 11 points in 12 games this season.

← NHL Morning Coffee Headlines - December 18, 2022 NHL Morning Coffee Headlines - December 19, 2022 →
We use cookies on our website to give you the most relevant experience by remembering your preferences and repeat visits. By clicking “Accept”, you consent to the use of ALL the cookies.
Do not sell my personal information.
Cookie SettingsAccept
Manage consent