NHL.COM: The Buffalo Sabres’ Rasmus Dahlin matched a franchise record for most points in a game by a defenseman with five points (two goals, three assists) as his club rallied to defeat the Minnesota Wild 6-5. Dahlin collected an assist on Victor Olofsson’s overtime winner as the Sabres (20-15-2) moved to within four points of the New York Islanders (46 points) for the final wild-card berth in the Eastern Conference. Joel Eriksson Ek and Ryan Hartman each had a goal and an assist for the Wild (22-13-3) as they sit third in the Central Division with 47 points. 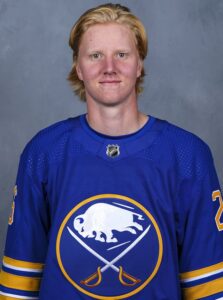 SPECTOR’S NOTE: Before the game, the Sabres paid tribute to Buffalo Bills safety Damar Hamlin as he recovers from cardiac arrest in hospital following a hit on the field during a game last week against the Cincinnati Bengals.

This is the point in the schedule when in recent years the Sabres would usually be in the midst of a free-fall in the standings. It’s a different story this season as they’ve won eight of their last 10 games and have moved into the Eastern Conference playoff chase.

Wild goaltender Marc-Andre Fleury will be on temporary leave starting Sunday through Tuesday as he journeys to Montreal for personal reasons.

Toronto Maple Leafs winger Mitch Marner had a goal and an assist to reach 500 career points in a 4-1 win over the Detroit Red Wings. John Tavares scored two goals for the Leafs (24-9-7), who sit in third place in the Eastern Conference with 55 points. Jake Walman replied for the Red Wings (16-15-7), who sit seven points out of an Eastern wild-card spot with 39 points.

SPECTOR’S NOTE: The Red Wings’ promising season is being undone by its recent slump. They’ve won only three of their last 10 and are slipping out of the playoff race.

The New Jersey Devils got two goals and an assist from Jack Hughes to overcome a 3-1 deficit and beat the New York Rangers 4-3 on an overtime goal by Damon Severson. The Devils (25-12-3) hold a two-point lead over the Rangers for second place in the Metropolitan Division with 53 points. Igor Shesterkin made 39 saves for the 22-12-7 Rangers.

Boston Bruins winger David Pastrnak tallied twice to double up the San Jose Sharks 4-2. The Bruins (31-4-4, 66 points) extended their win streak to three games and hold a nine-point lead over the Carolina Hurricanes for first overall in the league standings. With a record of 12-21-8, the Sharks (32 points) finished with their worst record for the first half of a season in 27 years.

Speaking of the Hurricanes, they dropped a 4-3 decision to the Columbus Blue Jackets. Rookie winger Kirill Marchenko collected his first career NHL hat trick for the Jackets (12-24-2) while Kent Johnson tallied the game-winning goal in the shootout. Max Pacioretty scored his first two goals of the season for the 25-8-7 Hurricanes.

An overtime goal by Cale Makar lifted the Colorado Avalanche over the Edmonton Oilers by a score of 3-2. Nathan MacKinnon and Brad Hunt scored for the Avalanche (20-15-3) as they overcame a two-goal deficit on goals by Oilers winger Zach Hyman. The Oilers (21-17-3) hold the final wild-card spot in the Western Conference with 45 points while the Avs are two points behind them.

The Seattle Kraken rolled to an 8-4 victory over the Ottawa Senators. Jordan Eberle and Andre Burakovsky each had a goal and two assists as the Kraken improved to 22-14-4 to sit in third place in the Pacific Division with 48 points. Senators forward Tim Stutzle had a hat trick and collected an assist for the Senators (18-18-3).

Los Angeles Kings winger Kevin Fiala’s hat trick powered his club over the Vegas Golden Knights 5-1. Gabriel Vilardi collected three assists for the Kings (23-14-6), who hold a four-point lead over the Kraken for second place in the Pacific Division. Golden Knights goaltender Logan Thompson was pulled following the second period after giving up three goals on 19 shots. His club still sits atop the Pacific with a record of 27-13-2 and 56 points.

The Montreal Canadiens snapped a seven-game slide by nipping the St. Louis Blues 5-4. Joel Armia tallied two goals and Josh Anderson got the winner to break a 4-4 tie. The Canadiens now sit at 16-21-3 on the season while the Blues (19-18-3) sit four points behind the Oilers for the final Western wild-card berth.

SPECTOR’S NOTE: Blues defenseman Nick Leddy missed this game with an upper-body injury. As yet, there is no timetable for his return.

Speaking of the Coyotes, they’ve sent Michael Carcone back to their AHL affiliate in Tucson as Dylan Guenther returns to their lineup from his stint with Team Canada in the 2023 World Junior Championship.

← NHL Rumor Mill - January 7, 2023 Sunday NHL Rumor Roundup - January 8, 2023 →
We use cookies on our website to give you the most relevant experience by remembering your preferences and repeat visits. By clicking “Accept”, you consent to the use of ALL the cookies.
Do not sell my personal information.
Cookie SettingsAccept
Manage consent