NHL.COM: Matt Duchene scored twice in a five-point performance to lead the Nashville Predators to a 7-1 drubbing of the Tampa Bay Lightning in preseason action on Friday. Tanner Jeannot had four points (including two goals) while Filip Forsberg collected three assists. 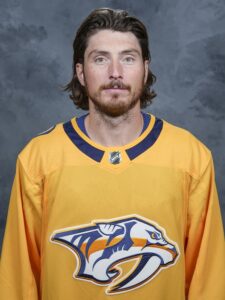 San Jose Sharks hopeful Danil Gushchin tallied a hat trick in a 7-3 win over the Vegas Golden Knights. Jack Eichel scored two goals for the Golden Knights. Ducks defenseman Urho Vaakanainen was stretchered from the ice after crashing into the end boards. He was taken to a hospital for observation and was said to have full movement of his extremities and was fully conscious and alert.

Speaking of the Ducks, sophomore center Trevor Zegras will undergo more medical tests after suffering an upper-body injury in a preseason game on Wednesday.

MONTREAL GAZETTE: Canadiens general manager Kent Hughes called Juraj Slafkovsky’s performance in his first two NHL preseason contests “a little underwhelming”. Hughes said the club would do what was best to help the 2022 first-overall pick to improve. He didn’t rule out having the 18-year-old winger start the season with their AHL affiliate in Laval.

The young Slovak is trying to adjust to a different style of game on a smaller ice surface. Some players can adjust quickly while others need more time.

The worst thing the Canadiens can do is try to push Slafkovsky into their lineup before he’s ready. If he needs a season in the AHL to adjust to the North American game then so be it. If he’s not NHL-ready yet he shouldn’t be on their roster this season simply because he’s a first-overall draft pick.

Speaking of the Canadiens, winger Josh Anderson explained the upper-body injury that sidelined him since the start of training camp was a spider bite on his hand that got infected.

SPECTOR’S NOTE: It wasn’t a radioactive spider so he won’t turn into the NHL’s version of Spiderman. Anderson is expected to return to their lineup before the end of their preseason schedule.

PHILLY HOCKEY NOW: Carter Hart will miss the Flyers’ first four preseason games. However, the 24-year-old goaltender said he expected to be ready for the club’s season opener on Oct. 13 against the New Jersey Devils.

SPECTOR’S NOTE: The Flyers will need a healthy Hart at his best if they hope to reach the playoffs this season. They’re already missing Ryan Ellis from their blueline for the season while center Sean Couturier will miss the start of the schedule with an upper-body injury.

THE DETROIT NEWS: Andrew Copp hopes to make his debut with the Red Wings in their season-opener on Oct. 14. The versatile 28-year-old forward signed with the Wings as a free agent but is still recovering from offseason abdominal surgery.

TORONTO STAR: Maple Leafs defenseman Carl Dahlstrom requires shoulder surgery that will sideline him for six months. Blueliner Jordie Benn will be out for three weeks with a groin strain.

THE DALLAS MORNING NEWS: Stars forward Ty Dellandrea will miss the next two-three weeks with a broken finger.

SAN JOSE HOCKEY NOW: The Sharks signed Scott Harrington to a one-year, two-way contract. The 29-year-old defenseman earned the job while on a professional tryout offer.

TORONTO STAR: The Maple Leafs signed Rasmus Sandin to a two-year contract worth an average annual value of $1.4 million. His deal is similar to that of teammate Timothy Liljegren. The 22-year-old defenseman missed the start of training camp due to his contract negotiations.

Cap Friendly indicates this signing puts the Leafs over the $82.5 million salary cap by $2.89 million but they can garner some temporary relief by placing Liljegren on long-term injury reserve and demoting another player. Sooner or later, however, they could be forced to make a cost-cutting trade.

SPORTSNET: With their defense corps already depleted by injuries, the Leafs are considering having All-Star winger Mitch Marner take some shifts on the blue line. The 25-year-old right winger is among the NHL’s best defensive forwards.

SPECTOR’S NOTE: Hall-of-Fame forwards Bob Gainey and Sergei Fedorov also used to sometimes play defense in certain circumstances. It might not be a bad idea to experiment with Marner on defense during preseason play to see how he fares in that role until their blueline is healthy again.

NJ.COM: New Jersey Devils captain Nico Hischier suffered a hamstring injury in preseason play and will be re-evaluated in 10 days.

SPECTOR’S NOTE: Hischier has been hampered by injuries for most of his young NHL career. The 23-year-old center is coming off a career-best 60-point performance in 70 games last season.

SPORTSNET: Eric Francis reports MacKenzie Weegar and his agent are pushing to get a contract extension done with the Calgary Flames before the start of the upcoming regular season. Acquired from the Florida Panthers in July, the 28-year-old defenseman netted a career-best 44 points last season and is a year away from unrestricted free agent eligibility.

SPECTOR’S NOTE: Francis expects Weegar could earn more than $6.5 million annually if he hits the open market on July 1. Both sides reportedly remain optimistic so there’s a chance an agreement could be hammered out before the Flames open their season on Oct. 13.

THE ORANGE COUNTY REGISTER: The Anaheim Ducks are still awaiting word as to the severity of Trevor Zegras’ upper-body injury. The 21-year-old sophomore center left Wednesday’s preseason game against the Arizona Coyotes after receiving a thunderous bodycheck by Jan Jenik.

THE ATHLETIC: Michael Russo reports Minnesota Wild forward Tyson Jost admitted he found it difficult watching the Colorado Avalanche win the Stanley Cup this year. Jost, 24, spent nearly six seasons with the Avs until he was traded to the Wild before last season’s trade deadline.

“It was just tough to watch, and now you’ve got to live with that,” he said, crediting his mother for helping him through that emotional time. He also deleted his Instagram account for a time after several Avs fans trolled him by leaving him messages saying their club wouldn’t have won the Cup if he’d still been with them.

SPECTOR’S NOTE: We’re so used to players saying how happy they are for their former teammates when they win the Cup. That feeling may be sincere but some of it could also be for public consumption. Privately, it has to affect them in some way to have missed out on winning hockey’s holy grail.

Jost doesn’t have any ill will toward the Avalanche. He’s also in a good position to play a larger role with a promising team in Minnesota than he did in Colorado. Maybe he’ll get his opportunity to win the Cup with the Wild.

TSN: Los Angeles Kings forward Jacob Doty will have a hearing on Friday with the NHL department of player safety for interference on San Jose Sharks forward Jeffrey Viel. The incident occurred during a preseason game on Wednesday.

THE DALLAS MORNING NEWS: Stars forward Ty Dellandrea broke a bone at the tip of one of his fingers after blocking a shot during Thursday’s preseason game against the Minnesota Wild. He’s expected to be sidelined for two-three weeks.