The Rangers need their young forwards to step up in 2022-23, Marc Staal looking forward to playing for a contender in Florida, Avalanche season tickets are popular again, and more in today’s NHL Morning Coffee Headlines.

NEW YORK POST: The Rangers’ success in the coming season could depend upon young forwards such as Kaapo Kakko, Alexis Lafreniere and Filip Chytil to build upon their promising performance in the 2022 Stanley Cup playoffs. They’ll also need Vitali Kravtsov to prove he’s worthy of top-six/top-nine minutes in the NHL. 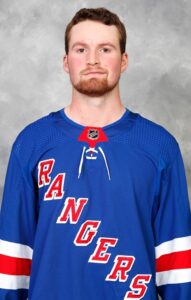 Those youngsters will be expected to fill the gaps in their forward lines after Andrew Copp, Frank Vatrano and Tyler Motte departed via free agency this summer. The current roster accounted for 223 of the club’s 250 goals last season. That would’ve ranked 26th among last season’s teams.

Lafreniere seems the best bet for a breakout season. He had 19 goals in 2021-22, showing promising signs of blossoming into the scorer he was projected to become when the Rangers chose him first overall in the 2020 draft.

Injuries limited Kakko to just seven goals in 43 games last season. Chytil had eight in 67 contests, missing 12 games to injury and being scratched from six others. They could improve if they can stay healthy this season. Kravtsov played in the KHL last season so we don’t know if he’s truly ready to become an NHL regular.

FLORIDA HOCKEY NOW: Marc Staal is excited to be joining a Stanley Cup contender after signing with the Panthers last month. The 35-year-old defenseman spent the past five seasons with rebuilding clubs like the Rangers and Detroit Red Wings.

SPECTOR’S NOTE: Staal saw just three games of postseason action over that period as the Rangers fell to the Carolina Hurricanes in the qualifying round of the 2020 playoffs. He inked a one-year, $750K contract on July 13 with the Panthers.

COLORADO HOCKEY NOW: The Avalanche’s Stanley Cup run has had a positive effect on their season ticket sales. They’ve already reached their cutoff/capacity limit for the coming season which is thought to be around 13,500. There’s now a waiting list for season tickets.

LAS VEGAS SUN: Nolan Patrick is expected to begin the coming season on long-term injury reserve. The 23-year-old Golden Knights forward is still dealing with an upper-body injury that limited him to just 25 games last season.

SPECTOR’S NOTE: The second-overall pick by the Philadelphia Flyers in 2017, Patrick battled migraine issues earlier in his career that cost him the entire 2019-20 season. It’s uncertain if his current injury is related to that.

THE HOCKEY NEWS: Detroit Red Wings prospect Simon Edvinsson is enjoying a solid performance for Sweden at the ongoing 2022 World Junior Championship. Chosen sixth overall by the Wings in 2021, the 6-foot-six, 203-pound defenseman signed his entry-level contract in April. He’s expected to make his NHL debut this season.

SPECTOR’S NOTE: If Edvinsson plays up to his potential, he and current Calder Memorial Trophy winner Moritz Seider will give the Wings two of the best young defensemen in the league. They could become the foundation of a future Stanley Cup champion in Detroit.

The Blackhawks down the Flyers, the three stars of the week and the Masterton Trophy nominees are revealed, Golden Knights goalie Robin Lehner to undergo season-ending surgery, and more in today’s NHL morning coffee headlines.

NHL.COM: Jonathan Toews had a goal and an assist and Alex DeBrincat matched his career-high with his 41st goal of the season as the Chicago Blackhawks defeated the Philadelphia Flyers in the only game on the NHL schedule last night.

SPECTOR’S NOTE: Earlier in the day, the Blackhawks announced center Kirby Dach is expected to miss their remaining games of this season due to a shoulder injury.

Montreal Canadiens goaltender Carey Price, Vegas Golden Knights center Jack Eichel and Anaheim Ducks captain Ryan Getzlaf are among the 32 nominees for the Bill Masterton Memorial Trophy. It is awarded annually to the player who best exemplifies perseverance, sportsmanship and dedication to hockey.

The full list can be seen at this link. Three finalists will be chosen with the winner announced between Games 3 and 4 of the 2022 Stanley Cup Final.

SPECTOR’S NOTE: Congratulations to all the nominees. Each of them are worthy candidates for the Masterton Trophy.

The eight Eastern Conference clubs that qualified for the 2022 Stanley Cup Playoffs made history. It’s the first time eight teams in the same conference each reached 100 points in a single season.

DAILY FACEOFF: The Vegas Golden Knights announced goaltender Robin Lehner will undergo season-ending shoulder surgery. Frank Seravalli first reported on Lehner’s injury and his requirement for surgery over two months ago. The Golden Knights denied Seravalli’s report, as they did with a recent report by ESPN.com’s Emily Kaplan claiming the 30-year-old Lehner would require a surgical procedure.

SPECTOR’S NOTE: The Golden Knights’ handling of this situation was very puzzling. It was apparent Lehner was struggling over the past two months and had missed some games likely because of his injury. They did themselves no favors with their public denials. It’ll be interesting to see if there will be any fallout from this story in the coming months.

WASHINGTON HOCKEY NOW: Capitals captain Alex Ovechkin is listed as day-to-day with an upper-body injury. He was hurt during Sunday’s loss to the Toronto Maple Leafs when he crashed awkwardly into the boards following a failed scoring attempt.

SPECTOR’S NOTE: By the sound of things, Ovechkin is expected to return to action in time for the start of the playoffs next week.

THE ATHLETIC: Sara Civian cited sources reporting sidelined Carolina Hurricanes goalies Frederik Andersen and Antti Raanta are expected to return in time for the playoffs starting next week. Andersen is out day-to-day with a lower-body injury. Raanta left the club’s previous game but that was due to a cramping issue. He’s expected to suit up as the backup for Tuesday’s game against the New York Rangers.

CBS SPORTS: Buffalo Sabres winger Kyle Okposo is being evaluated for a leg injury suffered during practice on Monday.

FLORIDA HOCKEY NOW: The NHL department of player safety levied a one-game suspension on Panthers forward Ryan Lomberg for instigating a fight with Tampa Bay Lightning defenseman Erik Cernak on Sunday. Panthers coach Andrew Brunette received a $10,000.00 fine for a game misconduct in the aftermath of the Lomberg-Cernak scuffle.

Sidelined Ottawa Senators forwards Shane Pinto, Connor Brown and Colin White are expected to remain out of the lineup for the remainder of the season.