A look at how the expansion Seattle Kraken could build their roster and coaching staff, plus the latest Predators speculation in today’s NHL rumor mill. 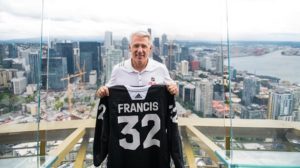 SPECTOR’S NOTE: Gallant’s performance during the Golden Knights’ record-breaking inaugural season earned him the Jack Adams Award as the 2017-18 NHL coach of the year. He’ll be a tempting option for Francis.

Dreger also believes a flat salary cap of $81.5 million could work in the Kraken’s favor when building their roster next year. Francis could take advantage of the tough decisions some cap-strapped teams could face heading into 2021-22.

Some of those clubs could try to interest Francis in taking a high-salaried player off their hands. He could also take advantage of arbitration cases where a team rejects the arbiter’s award or those that walk away from qualifying offers for their restricted free agents.

Dreger’s colleague Travis Yost believes the Vegas Golden Knights have provided the Kraken a blueprint for building a successful expansion roster. They got secure goaltending by selecting Marc-Andre Fleury in the expansion draft, swung several trades to obtain key players such as Jonathan Marchessault, Reilly Smith, Shea Theodore, and William Karlsson, and loaded up on promising young assets through the draft.

SPECTOR’S NOTE: Francis will have his own ideas for building his roster, but I don’t doubt he’ll also attempt to follow the Golden Knights’ template. The flat cap provides him with perhaps better opportunities to land quality talent through next summer’s expansion draft or via the trade and free-agent markets.

I’ve avoided the expansion draft guessing game some writers played during the interruption in the NHL schedule by COVID-19. A player that could be available today might be protected next year, while limited cap space could leave a supposed untouchable player unprotected. Still, it will be interesting to see what opportunities unfold for the Kraken come next summer.

COULD THE PREDATORS BUY OUT TURRIS?

THE ATHLETIC (subscription required): In a recent mailbag segment, Adam Vingan was asked about the likelihood of the Nashville Predators buying out Kyle Turris’ contract to free salary cap space to re-sign Mikael Granlund and Craig Smith. The two forwards are slated to become unrestricted free agents at season’s end.

Buying out Turris would save the Predators $4 million annually through 2024. Vingan isn’t sure if they’ll do t but believes they should give it serious consideration. Even then, he feels the likelihood of re-signing both Granlund and Smith is low.

SPECTOR’S NOTE: PuckPedia indicates buying out Turris will also leave the Predators with $2 million in annual dead cap space through 2027-28. With the cap expected to be flat for perhaps the next two seasons and growth to be slow after that, it still might not be a bad idea to remove the bulk of Turris’ cap hit.

As per Cap Friendly, the Predators have over $72.2 million invested in 17 players for 2020-21. Buying out Turris would reduce that to $68.2 million, providing a little extra wiggle room to re-sign Granlund or Smith, or to perhaps consider more affordable options via trade or free agency.

Whether GM David Poile goes that route is another story. He could attempt to move Turris’ entire contract, but that could mean packaging the center with a high draft pick and/or a top prospect.

← NHL Morning Coffee Headlines - July 24, 2020 NHL Morning Coffee Headlines - July 25, 2020 →
We use cookies on our website to give you the most relevant experience by remembering your preferences and repeat visits. By clicking “Accept”, you consent to the use of ALL the cookies.
Do not sell my personal information.
Cookie SettingsAccept
Manage consent