The Lightning return to the Stanley Cup Final, the Cup Final schedule is released, and more in today’s NHL morning coffee headlines.

NHL.COM: The Tampa Bay Lightning are heading back to the Stanley Cup Final. The defending champions beat the New York Islanders 1-0 in Game 7 of their semifinal series. Yanni Gourde scored shorthanded in the second period while goaltender Andrei Vasilevskiy turned in an 18-save shutout. Isles goalie Semyon Varlamov turned aside 30 shots. 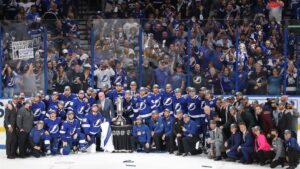 Lightning winger Nikita Kucherov and defenseman Erik Cernak returned from injuries for this contest. The Bolts also defied superstition for the second straight year by touching the Prince of Wales Trophy, traditionally awarded to the Eastern Conference champion.

The Lightning will face the Montreal Canadiens in the Stanley Cup Final.

SPECTOR’S NOTE: The Lightning defeated the Islanders at their own game in this contest. They played a suffocating defense that stymied their opponent’s offense. The defending champions’ depth made the difference against a team that pushed them to the limit.

It was a disappointing finish for the Islanders. but they served notice that last year’s run to the Eastern Conference Final was no fluke. They could remain among next season’s Cup contenders depending on what moves management makes this summer. I’ll have more in today’s Rumor Mill update.

The NHL released the full schedule for the 2021 Stanley Cup Final between the Lightning and Canadiens. Game 1 begins on Monday in Tampa Bay. Game 2 will be on June 30. There will be a two-day break between Game 3 (July 2) and Game 4 (July 5). Game 7 if necessary will be on July 11.

TSN: A lawyer representing a former player who alleges he and a teammate were sexually assaulted by the Chicago Blackhawks’ former video coach in 2010 has made a request for 31 requests for documents from the club related to the allegations. The player claims the Blackhawks covered up the incident instead of reporting it to the police.

The Blackhawks have filed a motion requesting the case be dismissed because it wasn’t filed within a limitation period. The club also said the former player’s complaint should’ve been made via a worker’s compensation claim. They have publicly declined to comment due to the ongoing lawsuit.

NBC SPORTS BOSTON: The Bruins re-signed forward Trent Frederic to a two-year contract with an annual average value of $1.05 million.

WINNIPEG SUN: Pascal Vincent, head coach of the AHL’s Manitoba Moose, is leaving that position to become an assistant coach with the Columbus Blue Jackets.

TORONTO SUN: The Maple Leafs hired Ryan Hardy as their Senior Director of Minor League Operations. He takes over as the GM of the AHL’s Toronto Marlies and the ECHL’s Newfoundland Growlers.

← NHL Rumor Mill - June 25, 2021 NHL Rumor Mill - June 26, 2021 →
We use cookies on our website to give you the most relevant experience by remembering your preferences and repeat visits. By clicking “Accept”, you consent to the use of ALL the cookies.
Do not sell my personal information.
Cookie SettingsAccept
Manage consent