NHL.COM: The New York Islanders tallied five unanswered third-period goals to upset the Boston Bruins 7-2. Semyon Varlamov made 34 saves while teammates Mathew Barzal, Anders Lee and Adam Pelech each had a goal and an assist for the Islanders. The Bruins have dropped three of their last four games.

Three straight third-period goals lifted the Washington Capitals over the Pittsburgh Penguins 5-2. Nicklas Backstrom, T.J. Oshie and Lars Eller each had a goal and an assist. Tom Wilson tallied the game-winner and also received a two-minute minor penalty for injuring Penguins forward Mark Jankowski with a late hit in the first period. Earlier in the day, the Penguins placed winger Jason Zucker (lower body) on injured reserve.

SPECTOR’S NOTE: Wilson has a history of questionable hits but it doesn’t appear as though he’ll receive supplemental discipline for this one.

The Tampa Bay Lightning scored twice in the third period in a 3-1 victory over the Carolina Hurricanes. Yanni Gourde netted the game-winner as the Lightning won their third straight over the Hurricanes, moving into second place in the Discover Central Division with 27 points.

A three-goal third-period rallied the Florida Panthers over the Dallas Stars 3-2. Sergei Bobrovsky made 37 saves while Aleksander Barkov, Anton Stralman and Frank Vatrano tallied for the Panthers, who sit atop the Discover Central Division with 28 points. Stars forward Roope Hintz missed his second straight game with a lower-body injury. 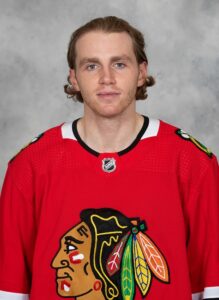 Patrick Kane tallied his 399th career goal and Malcolm Subban made 26 saves for his first shutout with the Chicago Blackhawks in a 2-0 blanking of the Columbus Blue Jackets. Carl Soderberg also scored for the Hawks, who sit third in the Central with 26 points.

SPECTOR’S NOTE: The Blackhawks keep finding ways to win thanks in part to Kane’s production and leadership. He’s moved into a tie with Toronto’s Auston Matthews (31 points) for third place in the NHL scoring race and continues to be considered among the early favorites for the Hart Memorial Trophy.

The Ottawa Senators are on their first three-game win streak of the season after upsetting the Calgary Flames 6-1. Matt Murray made 29 saves, Colin White scored twice and Drake Batherson scored for the fourth straight game.

Earlier in the day, the Senators placed center Derek Stepan on injured reserve among reports he suffered a season-ending shoulder injury against the Montreal Canadiens on Tuesday. They also placed little-used forward Filip Chlapik on unconditional waivers for the purpose of buying out his contract. Meanwhile, the Flames placed goaltender Jacob Markstrom (upper body) on injured reserve.

SPECTOR’S NOTE: The Senators’ improvement throughout February is due in part to giving more ice time to their younger players. They still have more rebuilding to do but they’ve served notice in recent weeks that they’re no longer an easy two points. The Flames, meanwhile, have dropped five of their last six.

An overtime goal by Pavel Zacha lifted the New Jersey Devils over the Buffalo Sabres 4-3. The Sabres made winger Jeff Skinner a healthy scratch for the third straight game, prompting his agent to contact general manager Kevyn Adams to express his concern over his client’s status. Sabres captain Jack Eichel was a late scratch with a lower-body injury while goalie Linus Ullmark left the game following the first period with an undisclosed injury.

SPECTOR’S NOTE: Skinner’s poor production this season is cause for concern for the Sabres but critics question if he’s being properly utilized by head coach Ralph Krueger. It’s yet another issue for a team whose playoff hopes are fading while raising questions about Eichel’s future in Buffalo.

Blake Wheeler had a goal and two assists while Kyle Connor scored twice as the Winnipeg Jets overcame 2-0 and 3-1 deficits to beat the Montreal Canadiens 6-3. The Habs dropped their fourth straight, spoiling the debut of interim head coach Dominique Ducharme. Canadiens winger Josh Anderson left the game in the first period after an apparent slew foot by Jets defenseman Dylan DeMelo. He’ll undergo more tests but Ducharme said his injury isn’t considered to be too serious.

SPECTOR’S NOTE: Ducharme declared a clean slate for his players before this game. What he got was a strong start undone by more shaky goaltending from Carey Price, sloppy defensive play and a collapse of confidence as the game rolled along. The Habs (22 points) still hold a playoff spot in the Scotia North Division only because the Flames and Vancouver Canucks are playing worse than they are. Speaking of the Canucks…

Edmonton Oilers goaltender Mike Smith turned in a 32-save shutout in a 3-0 victory over the Canucks. Alex Chiasson, Jesse Puljujarvi and Connor McDavid were the goal scorers.

SPECTOR’S NOTE: The Canucks have only two victories in 13 games this month.

TSN: Toronto Maple Leafs coach Sheldon Keefe said center Auston Matthews has been dealing with a wrist injury for most of this season. Matthews appeared to aggravate the injury during Wednesday’s 2-1 win over the Flames but Keefe feels it hasn’t gotten worse.

SPECTOR’S NOTE: Matthews was scoring at a goal-per-game pace prior to Wednesday. He has a shot at becoming the first player since Brett Hull in 1991-92 to score 50 goals in 50 games.

NEW YORK POST: Henrik Lundqvist returned to the ice earlier this week after undergoing open-heart surgery seven weeks ago. However, the 39-year-old goaltender said it will be months before he can reach a decision on whether he’ll continue his playing career.

NBC SPORTS BAY AREA: Saturday’s game between the San Jose Sharks and St. Louis Blues will continue as scheduled after the Sharks announced no new positive COVID-19 tests. Thursday’s game between the two clubs was postponed after Sharks forward Tomas Hertl tested positive. He’s expected to miss some time as he remains on the NHL’s COVID-19 protocol list.

TSN: The number of players on the league’s protocol list shrunk to seven players with three of those being members of the Philadelphia Flyers.

THE COLUMBUS DISPATCH: The Blue Jackets are preparing to increase the number of fans attending their home games after Ohio governor Mike DeWine announced indoor sports and entertainment events in the state to 25 percent capacity. The Jackets currently have a plan approved by the state that allows 10 percent capacity.

BOSTON HOCKEY NOW: The Bruins will soon welcome fans back to TD Garden as the state of Massachusetts will allow 12 percent capacity starting on March 22.

← Sabres forward Jeff Skinner is struggling...or is he? NHL Rumor Mill - February 26, 2021 →
We use cookies on our website to give you the most relevant experience by remembering your preferences and repeat visits. By clicking “Accept”, you consent to the use of ALL the cookies.
Do not sell my personal information.
Cookie SettingsAccept
Manage consent