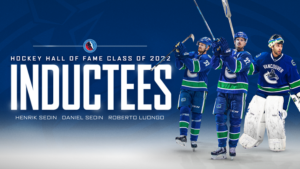 The Sedin Twins and Roberto Luongo are among the 2022 inductees into the Hockey Hall of Fame (NHL.com).

The Sedins were the two greatest players in Vancouver Canucks history, becoming their franchise leaders in several offensive categories. Henrik won the Art Ross Trophy and the Hart Memorial Trophy in 2009-10 while Daniel won the Art Ross and the Ted Lindsay Award in 2010-11. Luongo is second all-time among NHL goaltenders in games played (1,044) while his 489 career wins rank fourth overall.

Luongo and the Sedins helped turn the Canucks into a Western Conference powerhouse from 2006-07 to 2012-13. The club finished atop the Northwest Division six times and won the Presidents’ Trophy in 2011 and 2012. They also advanced to the 2011 Stanley Cup Final.

Alfredsson spent all but one of his 18 NHL seasons with the Ottawa Senators. He’s their franchise leader with 426 career goals, 682 assists and 1108 points. He’s also their longest-serving captain (1999-2000 to 2012-13) and led them to the 2007 Stanley Cup Final. Under Alfredsson’s leadership, the Senators topped the Northeast Division three times and won the Presidents’ Trophy in 2003.

THE SCORE: Josh Gold-Smith points out the Hall of Fame has snubbed former NHL star Alexander Mogilny for the 13th straight year since he became eligible for induction. He makes a convincing case for Mogilny’s induction, noting that he was the first player ever to defect from the Soviet Union directly to the NHL.

Mogilny amassed 473 goals and 559 assists for 1,032 points, including a 76-goal performance in 1992-93, and continued to produce solid numbers over the final years of his career despite chronic hip issues. Gold-Smith observed that his goal rate and goal total is higher than several of his contemporaries already in the Hall, including Steve Yzerman, Teemu Selanne, Joe Sakic, Pat Lafontaine, Peter Stastny and Pavel Bure.

SPECTOR’S NOTE: Gold-Smith suggests one reason for Mogilny’s exclusion could be his potential reluctance to engage in the induction festivities. However, that’s not a reason for the Hall not to honor his career and accomplishments. In my opinion, he belongs there.

THE DALLAS MORNING NEWS: Former Stars winger Corey Perry became the first player in NHL history to lose three consecutive Stanley Cup Finals with three different teams. He skated for the Cup Finalist Stars in 2020, the Montreal Canadiens in 2021 and the Tampa Bay Lightning this year.

SPECTOR’S NOTE: Perry will have to console himself with the Stanley Cup he won with the Anaheim Ducks in 2007.

TORONTO SUN: The Maple Leafs signed Timothy Liljegren to a two-year contract worth $1.4 million per season. The 23-year-old defenseman was slated to become a restricted free agent on July 13.

SPECTOR’S NOTE: Cap Friendly indicates the Liljegren signing leaves the Leafs with $6.4 million salary-cap space for 2022-23 with 18 players under contract. I’ll have more about that in the Rumors section.

TSN: Maxim Mamin is reportedly returning to the KHL after spending a season with the Florida Panthers. The pending unrestricted free agent forward had 14 points in 40 games.

ARIZONA SPORTS: The Coyotes have been awarded the Colorado Avalanche’s third-round pick in the 2024 draft. It was part of the conditions of the trade that sent goaltender Darcy Kuemper to the Avalanche last summer.

← NHL Rumor Mill - June 26, 2020 NHL Playoffs Breakdown - Maple Leafs vs. Blue Jackets →
We use cookies on our website to give you the most relevant experience by remembering your preferences and repeat visits. By clicking “Accept”, you consent to the use of ALL the cookies.
Do not sell my personal information.
Cookie SettingsAccept
Manage consent