What’s the future of J.T. Miller with the Canucks? Could Panthers coach Joel Quenneville have his eye on the Kraken’s coaching job? Could the Flames make a management change? Check out the latest in the Sunday NHL rumor roundup.

MILLER NOT SEEKING A TRADE FROM CANUCKS

SPORTSNET (via KUKLA’S KORNER): Elliotte Friedman reported there were lots of questions last week about J.T. Miller’s future with the Vancouver Canucks. He reached out to a source who indicated Miller doesn’t want to be traded and has no intention of leaving the Canucks. 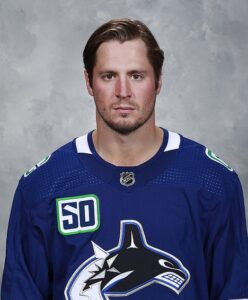 SPECTORS’ NOTE: Earlier in the week, Friedman speculated one or two members of the “upset” Canucks players could ask for a trade. I don’t have the context as to what those players would be upset about. It could be the way the season turned out or perhaps unhappiness that Jim Benning is staying on as general manager.

Miller has two years remaining on his contract with an annual average value of $5.25 million. He’s one of the Canucks top players and among their leadership core. His outspoken concern over the way the NHL was handling the club’s return to action from a COVID-19 outbreak forced the league to move that date ahead by a few days to allow the Canucks more time to adjust.

Benning indicated some changes will be coming this summer. I don’t see Miller being part of them unless he requests a trade. We now know that’s not something he wants to do.

NEW YORK POST: Larry Brooks reports of speculation suggesting Florida Panthers bench boss Joel Quenneville could have his sights set on becoming head coach of the Seattle Kraken when this season is over. Brooks thinks that might be the reason why Kraken GM Ron Francis is moving so slowly to reach a decision.

If Quenneville departs for Seattle, Brooks feels it would be money-related. He thinks that would also be a reason to rethink whether the Panthers would re-sign captain Aleksander Barkov before his UFA eligibility next summer.

SPECTOR’S NOTE: Cap Friendly indicates Quenneville is signed through 2023-24 earning a league-high $5.25 million per season. He’d have to break that contract to join the Kraken and that could get legally complicated. The Kraken would also have to make it financially worth his while.

The Panthers could fire Quenneville if they lose their first-round series to the Lightning. However, I don’t see that happening after he guided them to their best regular-season performance in years.

FLAMES NATION: Ryan Pike cited former TSN insider Frank Seravalli suggesting there could be management change coming to the Calgary Flames. During his recent appearance with Jason Gregor on the DFO Hockey Rundown podcast, he disagreed with general manager Brad Treliving’s end-of-season assessment that his club was a good team that had a bad year.

Seravalli pointed out the Flames have had the same core for a while. They doubled down on it last year by adding Jacob Markstrom and Chris Tanev but it didn’t pan out. He feels the Flames need a new look, be it a change in management or blowing up the core by moving Johnny Gaudreau or Sean Monahan.

SPECTOR’S NOTE: No indication thus far as to whether Treliving returns as general manager. He reportedly has two more years left on his contract. Ownership could give him at least one more year to try and get this club back on track.

If they intend to dump Treliving and hire a new general manager they must act soon. The expansion draft is July 21, the NHL Draft follows soon afterward (July 23-24) and the free-agent market opens on July 28. His replacement needs time to prepare for those important off-season events. ← Surveying the NHL Trade Sellers - Montreal Canadiens NHL Rumor Mill - January 22, 2020 →
Next Entries »
We use cookies on our website to give you the most relevant experience by remembering your preferences and repeat visits. By clicking “Accept”, you consent to the use of ALL the cookies.
Do not sell my personal information.
Cookie SettingsAccept
Manage consent