​The latest on the Sharks and Wild in today’s NHL rumor mill.

WHICH UFAS WILL THE SHARKS RE-SIGN?

THE ATHLETIC (subscription required): Kevin Kurz recently examined which San Jose Sharks’ unrestricted free agents could be re-signed and those who have likely played their final games in teal. 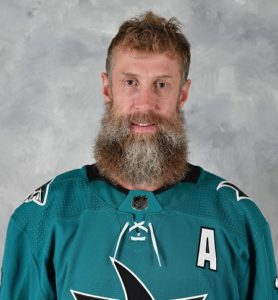 Will the San Jose Sharks bring back Joe Thornton for one more season? (Photo via NHL Images)

He feels it would make sense to bring back Joe Thornton if the long-time Sharks center accepts a $1 million or less salary to provide the club with salary-cap flexibility. He’s leaning toward Thorton’s return but doesn’t consider it a certainty.

Kurz wouldn’t be surprised if the Sharks re-signed Melker Karlsson but could also see him move on to another club. Having traded away a penalty killer in Barclay Goodrow, it might be worthwhile to re-sign Karlsson if he accepts a pay cut.

Backup goalie Aaron Dell won’t be back unless the Sharks can trade starter Martin Jones, but his contract makes him nearly impossible to move. Stefan Noesen will likely get an affordable one- or two-year deal. Unless the Sharks trade Brent Burns, Kurz expects the Sharks will part ways with Tim Heed.

SPECTOR’S NOTE: I’ve singled out the more notable of the Sharks’ UFAs. I can see Thornton, Karlsson, and Noesen being re-signed if they’re willing to accept cost-effective deals.

Cap Friendly indicates the Sharks have over $66 million invested in 13 players for 2020-21. General manager Doug Wilson indicated he believes his club can make a quick turnaround from this season’s disappointing performance. To do so, he’ll need those aforementioned free agents to accept affordable one-year contracts or watch them depart via free agency.

UPDATE ON THE WILD

THE ATHLETIC (subscription required): Michael Russo recently reported the league’s proposed roster expansion to 28 skaters and an unlimited number of goaltenders would allow the Minnesota Wild to use Kaapo Kahkonen in the 24-team playoff tournament.

Devan Dubnyk and Alex Stalock are the Wild’s current goalie tandem. However, coach Dean Evason isn’t ruling out the possibility of the AHL goalie of the year becoming their starter in the tournament if he plays well in training camp. “Whoever is in there that we deem is going to play well for us in whatever position, I’m sure everybody will support him and we will go forward,” said Evason.

Russo suggested it also makes sense for Wild general manager Bill Guerin to play Kahkonen to determine if the 23-year-old netminder is ready to become their No. 1 or No. 2 goalie next season.

SPECTOR’S NOTE: The Wild’s goaltending situation could get interesting in the off-season if Kahkonen outplays Dubnyk and Stalock in the proposed return-to-play tournament. Dubnyk has one season left on his contract with an annual average value of over $4.33 million and a 19-team trade list. Stalock has two years left at a cheap AAV of $785K. Should Kahkonen prove himself NHL-ready, Guerin could be tempted to use Dubnyk or Stalock as trade bait to address other roster needs.

Russo also reported Marcus Foligno hopes to sign a contract extension with the Minnesota Wild. The 28-year-old forward will become an unrestricted free agent next summer.

SPECTOR’S NOTE: Foligno’s become an effective third-line forward for the Wild. He carries a $2.875-million annual average value on his current contract. The Wild have over $39 million invested in just seven players for 2021-22, leaving plenty of space to re-sign Foligno if they choose.

← NHL Morning Coffee Headlines - June 8, 2020 NHL Return-To-Play Plan: The Draft Lottery →
We use cookies on our website to give you the most relevant experience by remembering your preferences and repeat visits. By clicking “Accept”, you consent to the use of ALL the cookies.
Do not sell my personal information.
Cookie SettingsAccept
Manage consent