​Three teams and five pending UFAs hurt the most by a flat cap in the Sunday NHL rumor roundup.

SPORTSNET: Rory Boylen listed the Toronto Maple Leafs, Tampa Bay Lightning, and St. Louis Blues as the three teams hurt the most by the salary cap remaining at $81.5 million for 2020-21.

Notable Leafs due for new contracts include Jason Spezza, Kyle Clifford, Travis Dermott, and Ilya Mikheyev. Defensemen Tyson Barrie and Codi Ceci are all but certain to depart via unrestricted free agency. The limited cap room could also be a problem next year when goaltender Frederik Anderson becomes eligible for UFA status. 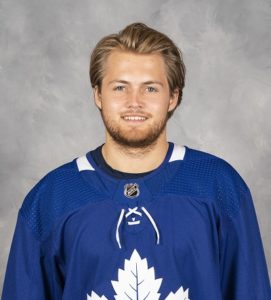 SPECTOR’S NOTE: It’s widely assumed Leafs general manager Kyle Duba will make a cost-cutting move or two. The Toronto Sun’s Michael Traikos believes a forward like Kasperi Kapanen, Andreas Johnsson, or even William Nylander and his $6.9 million cap hit could be traded in the off-season.

Dubas supposedly promised Nylander he wouldn’t be traded as long as he was the GM, but an unexpected flat cap could provide the perfect excuse. There would be considerable interest in Nylander, but perhaps not that much in his cap hit.

The Lightning has two good young players in defenseman Mikhail Sergachev and center Anthony Cirelli as restricted free agents in the off-season. A new contract for Cirelli alone could take up all of their cap room. Boylen points out winger Alex Killorn’s full no-trade clause becomes a 16-team no-trade at the end of this season, suggesting the Lightning might have to explore those 14 trade options.

SPECTOR’S NOTE: Killorn seems the most likely Lightning trade candidate when this season ends. Some have also suggested Tyler Johnson or Yanni Gourde but they’ve got full no-trade clauses and could be unwilling to waive them.

The Blues will have to make a couple of salary-dumping deals if they hope to re-sign defensemen Alex Pietrangelo and Vince Dunn. Boylen wonders if Colton Parayko, Tyler Bozak, David Perron, or Jake Allen hit the trade block.

SPECTOR’S NOTE: Allen seems a likely trade candidate now that Jordan Binnington’s secured his place as the Blues’ No.1 goaltender. Bozak and Perron have modified no-trade clauses. Of the two, the 32-year-old Perron would have more value than the 34-year-old Bozak, but Perron also has two years (at $4 million annually) left on his contract while Bozak has just one year at $5 million.

Lots of clubs would line up to land Parayko but I don’t think Blues GM Doug Armstrong wants to move him. In a recent mailbag segment, Tom Timmermann of the St. Louis Post-Dispatch proposed winger Jaden Schwartz as a possible trade option if the Blues re-sign Pietrangelo.

Kennedy speculates those five won’t enjoy the big-money free-agent bonanza they would otherwise get in a normal off-season. Some, like Pietrangelo or Markstrom, might have to accept a hometown discount on short-term deals if they wish to stay with their current clubs. The others might also end up having to accept a shorter term or less money.

SPECTOR’S NOTE: They won’t be the only unrestricted free agents likely to be disappointed by what they’ll likely get in the open market. A few, like Pietrangelo, could still get top dollar but could find those offers coming from rebuilding clubs with plenty of salary-cap space. Those players could be unwilling to join those clubs and instead accept shorter contracts for less money from contenders.

← NHL Morning Coffee Headlines - July 12, 2020 NHL Morning Coffee Headlines - July 13, 2020 →
We use cookies on our website to give you the most relevant experience by remembering your preferences and repeat visits. By clicking “Accept”, you consent to the use of ALL the cookies.
Do not sell my personal information.
Cookie SettingsAccept
Manage consent