​More Rangers speculation and what the Penguins will do with their free-agent goaltenders in today’s NHL rumor mill.

NEW YORK POST: Larry Brooks believes the Rangers are in need of a first-pair defenseman. He feels Brendan Smith is not up to logging those minutes alongside Jacob Trouba. Brooks points out Trouba was still trying to adjust to his new club when paired with rookie Libor Hajek earlier this season. Perhaps they might be a better fit next season. Promising K’Andre Miller might be able to fill that role one day, but it would be expecting too much for him to step into that position next season. 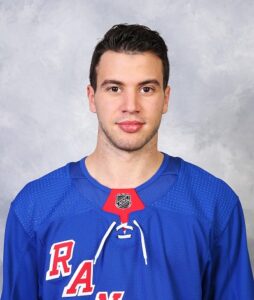 SPECTOR’S NOTE: The Rangers have over $68 million invested in 16 players next season, with Ryan Strome, Tony DeAngelo, Brendan Lemieux, and Alexandar Georgiev becoming restricted free agents with arbitration rights in the off-season. They would get some cap relief by trading or buying out Henrik Lundqvist, but that won’t be enough to re-sign those four and acquire a top-pairing blueliner via trade or free agency.

LOHUD.COM: Vincent Z. Mercogliano examined the Rangers’ possible off-season moves. He noted they’ll have about $13.5 million to spend on re-signing their free agents and can’t afford to keep them all.

Strome and DeAngelo earned the right to seek multi-year contracts, but their play against the Carolina Hurricanes in the qualifying-round series didn’t help their cause. To address their defensive issues. Mercogliano believes general manager Jeff Gorton will explore trade possibilities, with Strome, DeAngelo, and Georgiev as bait.

Regarding Henrik Lundqvist, if he’s unwilling to return as Igor Shesterkin’s backup next season or if the Blueshirt stick with Georgiev, Mercogliano speculates they could buy him out. Retirement is also possible but perhaps a long shot.

SPECTOR’S NOTE: Gorton has some big off-season decisions to make. Landing a top-pairing defenseman could involve shopping DeAngelo in a package deal. Still, acquiring that type of rearguard would eat up a lot of their cap room. Perhaps he’ll consider more affordable moves while waiting to see how things shake out next season with their younger players.

PITTSBURGH POST-GAZETTE: In a recent mailbag segment, Joe Starkey was asked about the long-term implication if the Penguins chose to re-sign goalie Tristan Jarry over Matt Murray regardless of the outcome of this postseason.

Starkey believes the Penguins cannot afford to re-sign both for even more than one season. They’re each slated to become restricted free agents with arbitration rights. It could come down to what each goalie seeks on his next contract. Murray’s performance in this year’s playoffs could also be a determining factor.

SPECTOR’S NOTE: Murray appeared in the Penguins’ first three games of their qualifying round series against the Montreal Canadiens, but he’s been out-played by the Canadiens’ Carey Price. If the Penguins are eliminated with Murray in net, that could have implications for his hopes of re-signing even a one-year deal.

← NHL Morning Coffee Headlines - August 7, 2020 NHL Playoffs Game Day Notebook - Predators vs Coyotes Game 4 →
We use cookies on our website to give you the most relevant experience by remembering your preferences and repeat visits. By clicking “Accept”, you consent to the use of ALL the cookies.
Do not sell my personal information.
Cookie SettingsAccept
Manage consent