TSN reports the Vegas Golden Knights have re-signed goaltender Robin Lehner to a five-year, $25-million contract. The annual average value is $5 million. Lehner, 28, was slated to become an unrestricted free agent on Oct. 9. 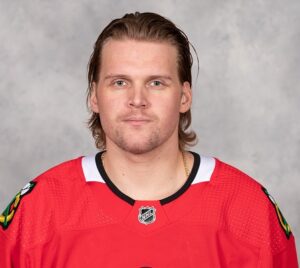 SPECTOR’S NOTE: Lehner probably could’ve received a higher annual average value on the open market. But after spending the past two seasons bouncing from the Buffalo Sabres to the New York Islanders to the Chicago Blackhawks to the Golden Knights, he obviously wanted long-term security. The uncertainty over league revenue and the salary cap generated by COVID-19 may have also factored into this decision.

In 2018-19, Lehner won the Bill Masterton Memorial Trophy and shared the William M. Jennings Trophy with Thomas Greiss. He was also a finalist that season for the Vezina Trophy. Acquired from the Blackhawks at the February trade deadline, Lehner outplayed Marc-Andre Fleury and took over the starter’s job in the 2020 playoffs.

The Golden Knights believe their future in goal rests with Lehner. The question now is what the future holds for Fleury. He’s indicated a willingness to stay and share the crease with Lehner. However, his $7 million annual average value through 2021-22 will be a problem for the Golden Knights, whose payroll sits just over the $81.5 million cap ceiling.

Someone’s got to go and it could Fleury via the trade market. He’s got a 10-team no-trade list, giving the Golden Knights some flexibility to find a suitable trade partner.

← NHL Rumor Mill - October 3, 2020 No Surprise at the top of our 2020 NHL Mock Draft →
We use cookies on our website to give you the most relevant experience by remembering your preferences and repeat visits. By clicking “Accept”, you consent to the use of ALL the cookies.
Do not sell my personal information.
Cookie SettingsAccept
Manage consent