The Bruins’ Stanley Cup odds, the Ducks sign another first-rounder and the latest Red Wings, Canadiens and Capitals speculation in today’s NHL morning headlines and rumors.

BOSTON HOCKEY NOW: The Bruins aren’t as good as they were last season but they remain a Stanley Cup contender. They lost defenseman Torey Krug to free agency, Zdeno Chara has yet to sign, and forwards Brad Marchand and David Pastrnak could miss the start of the season recovering from offseason surgeries. Nevertheless, oddsmakers in Las Vegas give them 14-1 odds to win the Cup. Only the Colorado Avalanche, the defending champion Tampa Bay Lightning, and the Vegas Golden Knights have better odds. 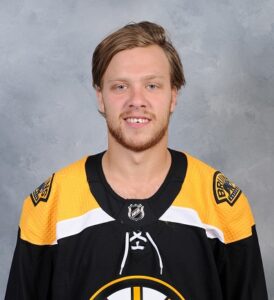 The Boston Bruins remain a Stanley Cup favorite in 2021 thanks to stars like David Pastrnak (NHL Images).

SPECTOR’S NOTE: The Bruins still have a solid goalie tandem in Tuukka Rask and Jaroslav Halak, one of the top offensive lines in Marchand, Pastrnak and Patrice Bergeron, two very good young defensemen in Charlie McAvoy and Brandon Carlo, and a solid supporting cast featuring David Krejci, Jake DeBrusk, and Charlie Coyle. They’re not an overwhelming Cup favorite anymore but we shouldn’t underestimate them.

THE ORANGE COUNTY REGISTER: The Anaheim Ducks signed defenseman Jamie Drysdale to a three-year entry-level contract. They selected Drysdale with the sixth overall pick in the 2020 NHL Draft.

SPECTOR’S NOTE: It’s the second signing of a top prospect by the Ducks in recent days. On Thursday, they signed winger Jacob Perreault (26th overall in this year’s draft) to an ELC.

SPECTOR’S NOTE: That could be one reason. Another could be Cirelli might not be interested in an offer sheet. If he was, perhaps he’s not keen to join a rebuilding team when he’s currently a member of a Stanley Cup champion that has a good chance of winning again over the next two or three years. Maybe Yzerman isn’t keen to invest most of his remaining cap space into one player and give up the compensatory draft picks if the Bolts fail to match the offer.

SPORTSNET: In a recent mailbag segment, Eric Engels was asked what he thought Montreal Canadiens GM Marc Bergevin intends to do with Paul Byron. He was also asked if the Habs might pursue a gritty veteran winger like Corey Perry.

While Byron has dropped down the Canadiens’ depth chart, Engels doesn’t see him getting traded. He feels the veteran forward has more value to the Habs as a player than what he might fetch in a trade. However, Bergevin could attempt to package him with a draft pick to the Seattle Kraken to ensure another player on the Habs roster isn’t selected in the expansion draft.

As for Perry, Engels thinks he’s the type of player who could help the Canadiens. He’d be an affordable addition who could be a fringe player in the regular season to save him for the playoffs when they’d need him the most.

Engels was also asked if the Canadiens might bring back Ilya Kovalchuk. Unless one or two of their forwards are sidelined during training camp, he’d be shocked if Kovalchuk returned to Montreal. He also doesn’t expect the Habs will try to trade defenseman Brett Kulak given Bergevin’s preference for as much NHL-quality depth on the blueline as possible.

SPECTOR’S NOTE: I concur with Engels on most of his assessments here. My only quibble (and it’s not much of one) is regarding Perry, as I suspect he’ll be back with the Dallas Stars next season.

THE ATHLETIC: In a recent mailbag segment, Tarik El-Bashir was asked which member of the Washington Capitals was most likely to be traded. He feels the Caps don’t have to make a trade but if forced to weigh salary versus role, Nick Jensen could be the likely candidate, though he stressed he’s not saying Jensen will be shopped.

Asked about any news on trading Jensen or Richard Panik, El-Bashir notes it won’t be easy to move their contracts. Jensen ($2.5 million annual average value) and Panik ($2.75 million AAV) each have three years remaining on their deals. He also doesn’t see the Capitals signing a free-agent forward like Anthony Duclair without freeing up some cap space first.

← NHL Rumor Mill - November 7, 2020 NHL Morning Coffee Headlines - November 9, 2020 →
We use cookies on our website to give you the most relevant experience by remembering your preferences and repeat visits. By clicking “Accept”, you consent to the use of ALL the cookies.
Do not sell my personal information.
Cookie SettingsAccept
Manage consent