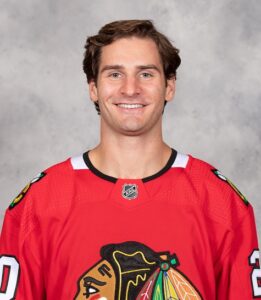 Regarding Grubauer, Amadon pointed to injuries and inconsistency affecting the 29-year-old goaltender’s performance since his acquisition from the Washington Capitals in 2018. He was also outplayed last season by rookie Pavel Francouz.

NBC SPORTS: Adam Gretz recently wondered if there’s a way the Avalanche can re-sign Saad or if he is merely a one-year rental player. He considers the 28-year-old winger a reliable two-way top-six forward who’ll net 20 goals and around 50 points each season.

With five other players (Landeskog, Grubauer, Ian Cole, Matt Calvert and Pierre-Edouard Bellemare) also due to become UFAs, Gretz notes the Avs’ salary-cap space will disappear quickly. He speculates it could cost between $5 million and $5.5 million annually to keep Saad, especially if they let some other players go. However, Landeskog and the goaltending situation will likely be the Avs’ priority heading into next summer.

SPECTOR’S NOTE: As per Cap Friendly, the Avalanche have $55.1 million invested in 12 players for 2021-22. Landeskog could cost around $7 million annually. Makar could get a bridge deal but he’ll still be in line for a significant raise, perhaps up to $5 million annually if Sakic decides to play hardball. The 35-year-old Bellemare probably won’t be back. Cole and Calvert could be affordable re-signings though the Avs could consider younger, cost-effective options.

There could be room to keep Saad if he proves a good fit. He’s earning $6 million annually on his current deal and could be reluctant to accept less than that approaching UFA eligibility for the first time. His status will become clearer once the regular season ends.

Grubauer’s situation could be interesting. Sakic said he’s happy with his current goalie tandem so I doubt he intends to make any changes there heading into this season. However, if Grubauer’s outplayed by Francouz again, Sakic could anoint him as his full-time starter by the season’s end. He could then seek an experienced backup next summer who’ll fit more easily within the Avalanche’s ’21-’22 budget.

NBC SPORTS: Gretz also believes the St. Louis Blues have some big decisions to make regarding winger Jaden Schwartz and goaltender Jordan Binnington. Both players are eligible for UFA status next summer.

Gretz suggests the Blues know what it could cost to re-sign Schwartz because they have an identical player in center Brayden Schenn, who they signed to an eight-year, $52 million extension. The decision, however, could come down to whether they want to invest that much in another player closing in on his 30th birthday.

Binnington could be a big question mark. He’s had a series of highs (winning the Stanley Cup in 2019), lows (the 2020 playoffs) and a little bit of in-between (the 2019-20 regular season). Nevertheless, Gretz considers him a solid starting NHL goalie.

The Blues have $55 million invested in their payroll for ’21-’22, but that will shrink once RFA defenseman Vince Dunn is signed before the start of this season. If it costs $6.5 million annually to sign Schwartz and if Dunn costs $3 million, they’ll have $16 million left for seven spots. That includes Binnington, who could get a deal comparable to what Matt Murray and Jacob Markstrom received ($6 million to $6.5 million annually) this summer.

SPECTOR’S NOTE: I suspect the Blues will do all they can to re-sign Schwartz. It could take $6.5 million annually to keep him but the length of the deal could be a sticking point. He could seek seven years while management could prefer four or five.

Unless Binnington’s performance goes downhill this season I doubt they’ll let him walk. Having traded Jake Allen, with no suitable replacements within their system and perhaps a lack of suitable options via next summer’s UFA market, they could have little choice but to sign him for perhaps around $6 million annually.

← NHL Morning Coffee Headlines - November 25, 2020 The Clock Is Ticking On NHL's Jan. 1 Return-to-Play Plan →
We use cookies on our website to give you the most relevant experience by remembering your preferences and repeat visits. By clicking “Accept”, you consent to the use of ALL the cookies.
Do not sell my personal information.
Cookie SettingsAccept
Manage consent