​In today’s NHL rumor mill: the Flames face some big offseason decisions, it might be time for the Sharks to consider trading Timo Meier or Kevin Labanc and Nikita Zadorov’s uncertain future with the Blackhawks.

TSN: Salim Valji examined the seven-year tenure of Calgary Flames general manager Brad Treliving and the big decisions he faces in the offseason. He pointed out the perception of the Flames as a flawed team has grown, suggesting it’ll take more than a handful of transactions to turn this disappointing club into a perennial Stanley Cup contender. 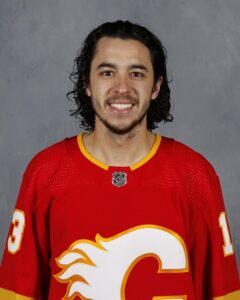 Winger Johnny Gaudreau’s no-trade clause kicks in after this season and he’s slated to become an unrestricted free agent next summer. Team captain Mark Giordano could be exposed in the expansion draft. Under-performing winger Matthew Tkachuk will be a restricted free agent next summer with arbitration rights requiring a $9 million qualifying offer.

SPECTOR’S NOTE: Treliving took responsibility for the Flames’ discouraging performance this season but that’s cold comfort for their fans. There could be growing calls for a new GM but Valji points out Treliving has two years remaining on his contract.

Gaudreau’s future could be Treliving’s biggest decision. The 27-year-old winger is a whipping boy for the Flames’ woes as his production has declined over the last two years. He could be their best trade chip but interested parties will want to know if Gaudreau will sign a contract extension before committing to a trade. He’d have more value if he’s under contract beyond next season.

Exposing Giordano in the expansion draft is a calculated risk. The Seattle Kraken could select him but could prefer another option given his age (37) and UFA eligibility next summer.

Tkachuk disappointed this season but the Flames could be reluctant to part ways with the pesky 23-year-old winger. He’d attract plenty of interest in the trade market but some teams will balk at that hefty qualifying offer.

THE ATHLETIC: Kevin Kurz points out it’s not just the San Jose Sharks’ veterans who are playing poorly of late but also their younger players. Most concerning is Timo Meier (24) and Kevin Labanc (25) aren’t performing to the level expected of players with their contracts.

Kurz wonders if it might be time to trade one or both but that won’t be easy. While they lack no-trade protection, Labanc has a $4.725 million cap hit for the next three seasons while Meier’s is $6 million annually for the next two.

SPECTOR’S NOTE: Their trade value at this point would also be affected by their play this season. Factor in those cap hits and getting a worthwhile return for either guy this summer seems unlikely.

Blackhawks general manager Stan Bowman listened to offers for Zadorov at the trade deadline but set a high asking price. He might have to lower it to move the blueliner this summer.

SPECTOR’S NOTE: Stillman’s $1.35 million annual average value and age (23) makes him a younger, more affordable option for the Blackhawks than the 26-year-old Zadorov, who’ll cost $3.2 million to qualify his rights. He’s also got arbitration rights this summer, making him perhaps more difficult to move this summer.

← NHL Morning Coffee Headlines - April 29, 2021 No-Movement Clauses and The 2021 NHL Expansion Draft →
We use cookies on our website to give you the most relevant experience by remembering your preferences and repeat visits. By clicking “Accept”, you consent to the use of ALL the cookies.
Do not sell my personal information.
Cookie SettingsAccept
Manage consent