The Blackhawks could have an interest in Jack Eichel, the Coyotes could try to trade Oliver Ekman-Larsson again, and the latest on Matthew Tkachuk in the Sunday NHL rumor roundup.

NEW YORK POST: Larry Brooks reports the Chicago Blackhawks are among the clubs with an interest in Jack Eichel, who is expected to be traded by the Buffalo Sabres later this summer. Brooks believes any offer from the Blackhawks for the Sabres captain must include young center Kirby Dach and their first-round pick (11th overall) in this year’s draft.

Other clubs believed to have an interest in Eichel include the Anaheim Ducks, Philadelphia Flyers, Minnesota Wild, Los Angeles Kings and perhaps the New York Rangers. Brooks also reports the Blackhawks are thought to be interested in Columbus Blue Jackets defenseman Seth Jones and Carolina Hurricanes blueliner Dougie Hamilton, who could sign with the Seattle Kraken.

THE COLUMBUS DISPATCH: Brian Hedger examined the potential pluses and minuses for the Blue Jackets if they were to acquire Eichel. His neck injury, desire for experimental surgery to treat the condition, $50 million remaining on his contract and the high cost of acquiring him are the drawbacks. The upside, however, is the addition of a hopefully healthy elite 24-year-old superstar center in his playing prime.

Hedger points out the Sabres need goaltenders. The Jackets could include Elvis Merzlikins or Joonas Korpisalo plus two of their three first-round picks in this year’s draft (including the fifth-overall selection) as part of a package offer. It would be surprising, however, if the Jackets parted with that fifth-overall pick.

OTTAWA SUN: Bruce Garrioch is dismissive of speculation suggesting the Senators could pursue Eichel. While they could use him, his $10 million annual cap hit for the next five years plus the Sabres’ high asking price makes no sense for them at this point in their rebuild.

SPECTOR’S NOTE: Brooks suggests the Blackhawks’ interest in Eichel could be tied to the uncertainty over the health of captain Jonathan Toews, who missed this season battling a mysterious illness. He’s expected to return to action next season but Toews and the Hawks are keeping silent about his condition.

With Brent Seabrook and Andrew Shaw on permanent long-term injury reserve, the Blackhawks will have nearly $11 million in cap relief if they wish to add a high-salaried player this summer. One can’t fault them for exploring the cost of acquiring Eichel if doubt remains about Toews’ condition. However, recent speculation has tied them to Jones and Hamilton given their need for a top-two defenseman. Those two would be more affordable to acquire than Eichel.

The Jackets have bee been searching for a true first-line center for some time. They have the cap space, those extra first-round picks and the goaltending depth to draw upon as trade bait for an Eichel offer. However, the Sabres could want that fifth-overall pick plus another player or a top prospect included in the deal. 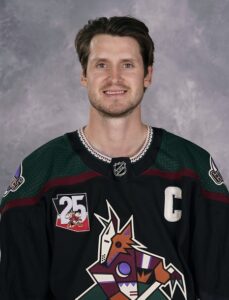 I agree with Garrioch that it’s nonsense to link the Senators to Eichel. Their young players showed considerable improvement last season. It would be wise to maintain their current pace for another season and see how they develop. The Sens should pursue an experienced center this summer but will likely target more affordable options.

SPORTSNET: Elliotte Friedman reports the Arizona Coyotes will try again to trade defenseman Oliver Ekman-Larsson. They attempted to deal their 29-year-old captain last fall but he only agreed to waive his no-movement clause for the Boston Bruins and Vancouver Canucks.

Friedman said the two sides will take a different approach this time. The Coyotes will check the trade market. If they get a suitable offer they’ll bring it to Ekman-Larsson and he can decide if he’s comfortable with it.

SPECTOR’S NOTE: Ekman-Larsson’s declining performance and his hefty $8.25 million annual average value for the next six years will make him difficult to move. The Coyotes could be forced to absorb some salary or take back an expensive contract to make this work.

SHOULD THE BLUES PURSUE MATTHEW TKACHUK?

STLTODAY.COM: Ben Frederickson believes the St. Louis Blues should make a pitch for Matthew Tkachuk if the Calgary Flames are crazy enough to trade him. He feels the 23-year-old winger could help the Blues find some of their missing spark with his gritty offensive style of play.

Tkachuk has one year remaining on his current contract worth $7 million and becomes a restricted free agent next summer. Frederickson believes he’d be worth sacrificing Jordan Kyrou’s scoring potential or their first-round pick (16th overall ) in this year’s draft or finding the necessary cap space for a long-term deal.

SPECTOR’S NOTE: Flames general manager Brad Treliving has indicated he’s going to explore all his options this offseason. That includes possibly trading Tkachuk. So far, however, there’s no indication the young winger’s on the trade block. Most of the Flames trade speculation involves Johnny Gaudreau and Sean Monahan.

Frederickson is correct in his assessment of the Flames’ expensive asking price for Tkachuk. Nevertheless, there will be teams willing to pay it to get him. The Blues could be among the suitors but they might not win a bidding war for his services.

← NHL Morning Coffee Headlines - June 20, 2021 NHL Morning Coffee Headlines - June 21, 2021 →
We use cookies on our website to give you the most relevant experience by remembering your preferences and repeat visits. By clicking “Accept”, you consent to the use of ALL the cookies.
Do not sell my personal information.
Cookie SettingsAccept
Manage consent