The Bruins bounce back against the Hurricanes while the Leafs, Oilers and Wild take 2-1 leads in their respective first-round series. Details and much more in today’s NHL morning coffee headlines.

NHL.COM: The Boston Bruins doubled up the Carolina Hurricanes 4-2 in Game 3 to pick up their first win of the series. The Hurricanes now hold a 2-1 lead in their best-of-seven first-round series. Brad Marchand had a goal and two assists, David Pastrnak and Charlie Coyle each had two points while rookie goaltender Jeremy Swayman made 25 saves for his first-ever NHL playoff victory. Game 4 will be on Sunday, May 8. 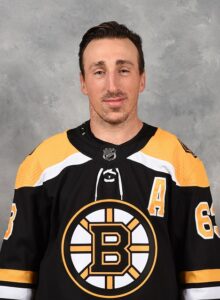 SPECTOR’S NOTE: The reunited “Perfection Line” of Marchand, Pastrnak and Patrice Bergeron made their presence felt in this contest. Swayman showed no sign of nerves stepping into this contest after being the backup in the first two games.

There was a scary moment for NHL off-ice official Joe Foley as a pane of glass was accidentally knocked loose by Bruins fans and fell on him while he was working in the penalty box. He was taken off on a stretcher and sent to a local hospital for observation, where he is reportedly all right and is expected to recover.

Toronto Maple Leafs goaltender Jack Campbell made 32 saves to help his club hold off the Tampa Bay Lightning 5-2 in Game 3 of their opening round series. They led Tampa Bay two games to one. Pierre Engvall collected three assists while Ilya Mikheyev tallied twice for the Leafs. Ondrej Palat had a goal and an assist for the Lightning. The two clubs square off in Game 4 on Sunday.

SPECTOR’S NOTE: The Lightning cut Toronto’s 3-0 lead to 3-2 early in the third period but Campbell’s goaltending and Mikheyev’s two late goals sealed the win. The Leafs’ depth players stepped one as their big guns (Auston Matthews, Mitch Marner, William Nylander and John Tavares) were held to just one assist in this contest.

The Edmonton Oilers got a hat trick from Evander Kane in their 8-2 drubbing of the Los Angeles Kings in Game 3 to go up 2-1 in their first-round series. Zach Hyman and Ryan Nugent-Hopkins each scored two goals and an assist while Mike Smith turned in a 44-save performance for the win. Kings goalie Jonathan Quick got the hook after giving up four goals on 17 shots.

SPECTOR’S NOTE: After a narrow 4-3 loss in Game 1, the Oilers have outscored Los Angeles 14-2 over the next two games. This series will be over quickly at this rate if the Kings fail to neutralize the Oilers’ offense. They’ll get the opportunity in Game 4 on Sunday.

Minnesota Wild netminder Mark-Andre Fleury made 29 saves to backstop his club to a 5-1 victory over the St. Louis Blues in Game 3 to go up two games to one in their first-round series. Jordan Greenway opened the scoring just 39 seconds into the first period. Kirill Kaprizov and Joel Eriksson Ek each had a goal and an assist for the Wild.

SPECTOR’S NOTE: The Blues’ banged-up blueline suffered another blow as defenseman Torey Krug left the game with a lower-body injury. They were already playing without Robert Bortuzzo and Nick Leddy as both are sidelined by upper-body injuries.

PITTSBURGH HOCKEY NOW: Penguins backup goaltender Casey DeSmith underwent core-muscle surgery on Friday and is out for the remainder of the playoffs. With starter Tristan Jarry still rehabbing an injured foot, the Penguins will turn to Louis Domingue in Game 3. Domingue replaced DeSmith during their series-opening 4-3 triple overtime win over the New York Rangers. The series is tied at a game apiece with Game 3 on Saturday in Pittsburgh.

ESPN.COM: Nashville Predators starter Juuse Saros has been ruled out for Saturday’s Game 3 against the Colorado Avalanche. Connor Ingram is expected to get the start for the Predators, who are down 2-0 to the Avalanche in their first-round series.

SPECTOR’S NOTE: Ingram made 49 saves in a 2-1 overtime loss in Game 2. He must maintain that level of performance and hope his teammates’ popgun offense can improve if the Predators are to get back into this series.

THE ATHLETIC: Vegas Golden Knights captain Mark Stone will undergo further tests and research to attempt to address a nagging back injury that hampered his performance this season.

DAILY FACEOFF: cited Cap Friendly indicating only six teams (Bruins, Lightning, Golden Knights, Calgary Flames, Seattle Kraken, and Winnipeg Jets) will have the full $82.5 million salary-cap payrolls to spend in 2022-23. Fourteen clubs will be affected by performance bonuses exceeding this season’s $81.5 million cap and being applied to next season.

SPECTOR’S NOTE: Click on the link above for the full list. It ranges from as low as $25K (Avalanche) to as high as $1.25 million (Vancouver Canucks).

OTTAWA SUN: NHL commissioner Gary Bettman said there isn’t a “for sale” sign in front of the Senators. There was speculation the club could be sold following the death of owner Eugene Melnyk in March. Bettman said it will be up to Melnyk’s daughters what they wish to do but indicated the club isn’t on the market and there are “no problems”.

SPECTOR’S NOTE: The Senators are being by a three-man group that has had a hand in running the club for several years. They will continue to do so for the foreseeable future.

TSN: Speaking of Bettman, he said former NHL coach Joel Quenneville hasn’t approached him about returning behind the bench. Quenneville resigned as coach of the Florida Panthers last fall for his role in the Chicago Blackhawks’ mishandling of Kyle Beach’s sexual assault allegations against a former video coach in 2010. Part of the conditions surrounding any plan for his return to the NHL coaching ranks is approval from the league commissioner.

SPECTOR’S NOTE: There were recent rumors Quenneville was either contemplating a return or that a club was interested in hiring him.

NHL.COM: The dates for the announcements of the NHL Award finalists have been released, starting with the James Norris Memorial Trophy on Monday, May 9. Click the link for the complete list. The winners will be revealed during the Conference Finals and the Stanley Cup Final.

← NHL Rumor Mill - May 6, 2022 NHL Rumor Mill - May 7, 2022 →
We use cookies on our website to give you the most relevant experience by remembering your preferences and repeat visits. By clicking “Accept”, you consent to the use of ALL the cookies.
Do not sell my personal information.
Cookie SettingsAccept
Manage consent