The Devils are open to trading their 2022 first-round pick plus a look at the Sabres’ roster needs in the NHL rumor mill.

DEVILS COULD PEDDLE THEIR 2022 FIRST ROUNDER

Fitzgerald said he’d be open to using that pick to acquire a player “that we know and feel will help impact the results that we are looking for.” The Devils GM believes it is time for his young team to start contending for the playoffs.

SPECTOR’S NOTE: Fitzgerald’s comments have already prompted some observers to muse over what type of player the Devils would want in exchange for that pick. Vancouver Hockey Now’s Rob Simpson recently examined the pros and cons of the Canucks’ offering up J.T. Miller if they’re unable to sign him to a contract extension.

Simpson is merely spitballing here as there’s no indication Miller is on the trade block. Nevertheless, you get the idea of the type of player it could take to pry that first-rounder away from the Devils, especially if they win the draft lottery. Fitzgerald would probably prefer someone with more than a year of term remaining on their contract. 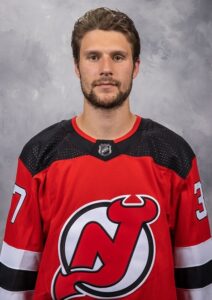 Speaking of the Devils, THE ATHLETIC’s Shayna Goldman believes Pavel Zacha is the most likely of their current roster to be traded in the offseason. The 25-year-old spent most of this season on the wing but prefers playing center. He’s a restricted free agent with arbitration rights who isn’t worth much more than his current $2.25 million annual average value.

Goldman also believes the Devils face a big decision regarding Mackenzie Blackwood. Injuries have hampered his development as a starting goaltender over the past two seasons. They must determine if there’s still room for improvement or if he’d be better off with a fresh start elsewhere. She suggested it could depend if a UFA goaltender like St. Louis’ Ville Husso or Colorado’s Darcy Kuemper is willing to sign with them.

SPECTOR’S NOTE: Zacha’s name popped up around midseason linking him to the Canucks. Its’ believed they’ll be seeking affordable talent in the early-to-mid twenties. We’ll find out at some point this summer if there’s a potential fit for him in Vancouver.

Goaltending was the Devils’ undoing this season. Blackwood cannot be faulted for his injury history and his struggles attempting to regain his form upon his return to action. Nevertheless, this franchise needs an upgrade between the pipes to have a fighting chance of becoming a playoff contention next season. It’s up to Fitzgerald to address that issue, be it shipping out Blackwood or putting him in a backup role to an established starter.

WHAT ARE THE SABRES’ OFFSEASON NEEDS?

THE ATHLETIC: John Vogl recently examined what roster issues the Buffalo Sabres should address during the offseason.

Goaltending is their most pressing need. Craig Anderson, 40, will take a month or two to decide if he wants to return or retire. Sabres GM Kevyn Adams will look at all his options. Vogl speculated they could sign a second-tier unrestricted free agent such as Braden Holtby, Casey DeSmith or Martin Jones.

They could also acquire a goalie with a year left on his contract to serve as a bridge to young netminders such as Ukko-Pekka Luukkonen, Devon Levi and Erik Portillo. Options could include the New York Islanders’ Semyon Varlamov, the Carolina Hurricanes’ Antti Raanta, Minnesota Wild’s Cam Talbot or Los Angeles Kings’ Jonathan Quick.

Adams must also improve his defense corps. Vogl believes they should add a right-handed shot to their heavy left-shot blueline but Adams stressed the importance of finding the right fit.

SPECTOR’S NOTE: Adams might have better luck signing one of those second-tier UFA goalies. The Sabres could be part of Varlamov’s 16-team no-trade list, Raanta has a long injury history, the Wild could stick with Talbot ($3.666 million) if they’re unable to re-sign Marc-Andre Fleury and the Kings’ could allow the 36-year-old Quick to finish his career in Los Angeles.

← NHL Morning Coffee Headlines - May 7, 2022 NHL Morning Coffee Headlines - May 8, 2022 →
We use cookies on our website to give you the most relevant experience by remembering your preferences and repeat visits. By clicking “Accept”, you consent to the use of ALL the cookies.
Do not sell my personal information.
Cookie SettingsAccept
Manage consent