Could the Canucks attempt to trade Oliver Ekman-Larsson? Are they laying the groundwork for a potential offer sheet? Could Ducks winger Max Comtois hit the trade block this summer? Find out in today’s NHL rumor mill.

DAILY HIVE: cited Sportsnet’s Elliotte Friedman speculating the Vancouver Canucks could attempt to trade Oliver Ekman-Larsson. During a recent interview with CHEK TV’s Don Taylor and Rick Dhaliwal, Friedman said he anticipated the Canucks will be “a very aggressive team” in the offseason. He thinks they’ve looked around to see if there’s a market for the 30-year-old defenseman. 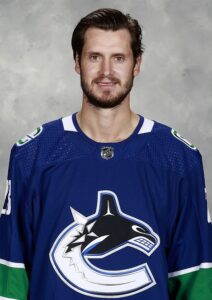 SPECTOR’S NOTE: The Canucks’ previous management acquired Ekman-Larsson last summer. Daily Hive’s Rob Williams pointed out the blueliner played well defensively this season, sitting second among the Canucks in ice time. However, his 29 points were his lowest during a full 82-game schedule.

Williams also noted that moving Ekman-Larsson’s contract could be a herculean task. The Canucks carry $7.26 million of his $8.25 million annual salary-cap hit with the Arizona Coyotes picking up the rest.

Ekman-Larsson is signed through 2026-27 and still carries a full no-movement clause. Even if he agreed to waive that clause to go to a club of his choosing, his cap hit and the remaining term of his contract will be tough to move with the salary cap rising by only $1 million to $82.5 million for 2022-23.

I’m not saying it can’t happen. However, it will take some salesmanship on the part of Canucks general manager Patrik Allvin and president of hockey operations Jim Rutherford to pull it off.

SPORTSNET: Jeff Marek recently suggested the Canucks could also be laying the groundwork for a potential offer sheet this summer. He pointed out the Canucks got back their own third-round draft pick in this year’s draft from the Ottawa Senators in the Travis Hamonic trade.

Marek pointed out that successfully signing a restricted free agent to an offer sheet this summer worth between $4.1 million and $6.1 million would require giving up their own first and third rounders as compensation.

SPECTOR’S NOTE: Marek said he’s not sure if the Canucks will play the offer sheet game this summer but commended them on “getting as many weapons together as possible.” Going that route would also mean shedding some salary, which might in part explain the Ekman-Larsson speculation.

This could be worth monitoring when the free-agent market opens on July 13. Offer sheets are rare and only two players in the salary-cap era (the latest being Jesperi Kotkaniemi) have been successfully signed away. Nevertheless, we can’t rule out that possibility if the Canucks can dump some salary beforehand.

WILL COMTOIS BECOME A TRADE CANDIDATE?

THE ATHLETIC: Eric Stephens recently reports Max Comtois’ disappointing season with the Anaheim Ducks saw his name pop up in trade rumors. There was some thought that the 23-year-old winger might benefit from a change of scenery.

Comtois, however, hopes to stay put. He lacks a no-trade clause and acknowledged it is up to management to decide. Still, he said he likes the team and hopes to help this rebuilding club succeed.

SPECTOR’S NOTE: Comtois led the low-scoring Ducks with 16 goals and 33 points in last season’s COVID-shortened campaign. He got off to a slow start to this season before being sidelined for six weeks by a hand injury and struggled to regain his form following his return.

New general manager Pat Verbeek could still see Comtois as an important part of his roster rebuild. He’s signed through next season with an affordable $2.037 million cap hit. Still, Verbeek showed his willingness to wheel and deal before the trade deadline. He could consider Comtois as a potential trade chip this summer.

← NHL Morning Coffee Headlines - May 12, 2022 NHL Morning Coffee Headlines - May 13, 2022 →
We use cookies on our website to give you the most relevant experience by remembering your preferences and repeat visits. By clicking “Accept”, you consent to the use of ALL the cookies.
Do not sell my personal information.
Cookie SettingsAccept
Manage consent